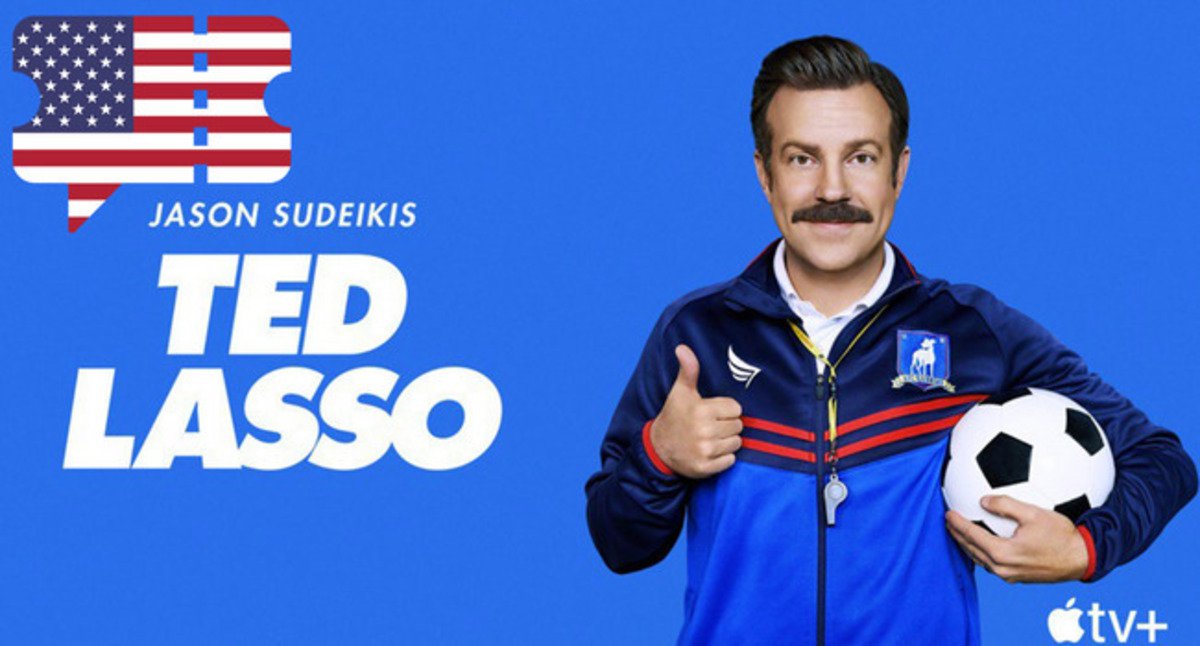 My name is Abby and the show Ted Lasso has taken over my entire life.

Enter: my employer's content section. The place I come when my Ted Lasso sweatshirt is in the wash, tweets feel like frivolous and inadequate representations of my affection, and my friends are soon-to-be acquaintances because the only person I talk about is Ted Lasso. ("Sorry guys I know we're chatting about a real life event that actually happened to you but this reminds me of a moment from Ted Lasso, a fictional television series none of you have seen.")

So here I am, writing a love letter to musical theater icon Ted Lasso.

Warning: While I've personally determined musical theater to be the essence of this show, sports are a large part of the general nature of Ted Lasso. Many scenes take place in a locker room, which if you are unfamiliar, is the equivalent to the boys dressing room in the basement of your community theater during a weekend run of Fiddler on the Roof. You don't have to know anything about soccer to love Ted Lasso; Ted Lasso doesn't know anything about soccer and the show is named after him.

Here's the pre-show info sheet in the Ted Lasso Playbill: In 2013 a NBC Sports commercial (stay with me) went viral. In it, Jason Sudeikis (Saturday Night Live, Horrible Bosses, my heart) plays an American football coach named Ted Lasso who gets hired to coach British football in England. British football is soccer, it's unbelievable to me that they couldn't come up with different names. So many other words exist.

The commercial was a hit so they made a second one and then in 2020, Sudeikis, his friends from his Chicago improv days Brendan Hunt and Joe Kelly, and Scrubs creator Bill Lawrence (that musical episode was a fever dream, no?) turned it into the Apple TV+ show — a show that's already been renewed for two more seasons — we've gathered here to talk about today.

As someone who grew up singing along to the cast recording of Wicked while I got ready to cheerlead at high school football games — Ted Lasso's knowledge of theater makes my heart burst. We're all onions with lots of layers and one of Lasso's deepest layers is his pure, undying love of musicals.

Ted Lasso is hired to coach a sport he literally does not understand in a country he knows nothing about and the universal language of musical theater is the bridge that brings him closer to his new team (cast & crew). It's a beautiful thing to witness, even from the stands (audience).

Fuck yeah, the Gershwins! Not only do these little pockets of theater make me happy but they're such great glimpses into the lives of the characters, especially Ted's. Theater teaches you that "hope and empathy are never out of style" (Jason Sudeikis), theater gives space for actors to express as audience members absorb, all in the same breath. And whether he's talking about West Side Story or coaching or chatting about his feelings to The Boss, Ted brings the lessons of theater into each and every intentional relationship he creates. There's no way he would be the coach, dad, friend, or human he is if Rodgers and Hammerstein were not the first thing he thought of when he heard the word Oklahoma.

Now it's time for a musical interlude. That's right, theater nerds. Ted Lasso doesn't only talk the talk but it sings the song. There's a moment when West End Queen Hannah Waddingham sings "Let It Go" from Frozen in a karaoke bar and the lyrics of the song mirror what her character Rebecca is going through in the show! A classic musical move! The very definition of a musical, some would say! And she looks like Elsa! And Roy Kent knows all of the words! An honest to God 11 o'clock number where's the mid-show standing ovation.

I promise I'm not here to spoil the entire show before you've watched it, just every single reference you'll likely care about. That being said I need to know that you know that the final moments of the series contain a cover of a song from Carousel and you will likely get teary as this particular song from Carousel plays over scenes of a soccer and/or football game. Take it home Ted.

After my first viewing of Ted Lasso but before my second (there has also been a third viewing whilst in my Ted Lasso merch, just want to be honest) — I started doing what I do every time I enjoy some form of entertainment even a little bit: I watched every single interview that any member of the cast has ever done and then also movies they've been in and also every iteration of What's Up With That? and also most podcasts they've been on and/or host.

I love Ted Lasso like I assume sports fans love their favorite teams and Ted, Coach Beard, Rebecca, Keeley, Roy, Nate the Great, Jamie, and Higgins are my favorite players. Why? Mostly because they are hot theater nerds.

What I'm very proud of [in] this show is how much Ted — and everyone in the show — knows musicals. And it's the way I personally was raised. Brendan is a theater nut. Bill Lawrence can sing all of Les Mis in French. We have men and women that totally love and care about that.

After listening to Sudeikis and Hunt on Brené Brown's podcast Unlocking Us, it's clear how intentional the writers were with these easter eggs of theater history, with how they use them to give depth to individual characters but also the relationships in the show. That Ted Lasso knows who the Gerswhins are tells you a lot about him, about what his childhood was maybe like. That Jamie doesn't understand how plays work reiterates what you probably had already gathered from him in earlier episodes, but in a fresh new way.

Before I watched Ted Lasso, I judged it by its sports commercial cover. What if I had never watched the show? What sweatshirt would I be wearing right now? What cast recording would I be listening to as I type? I'm glad I'll never have to know. And I'm glad I gave this special show a chance. Because underneath the commercial cover is a story that's mostly about musicals, or at least one that has a continuous theater energy. It's medicine for the heart.

What I've just written here is a lesson in how seriously you start feeling about your favorite television shows when you live alone during a pandemic. In conclusion, watch Ted Lasso on Apple TV+ and — when it's safe — "Go see shows. Fund the arts. Don't give it all to the Sacklers." (Jason Sudeikis)