Best Actor in a Leading Role in a Musical

Who’s Ahead in the Tony Races? We analyzed the odds for "Best Actor in a Leading Role in a Musical!" 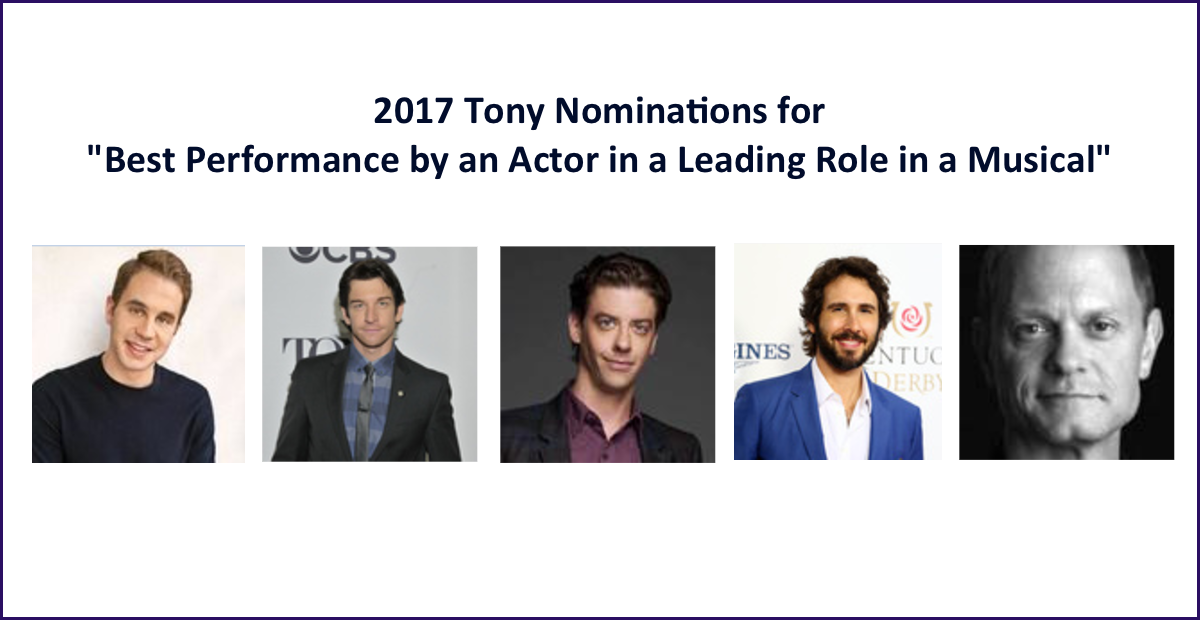 (1) Christian Borle as Marvin in “Falsettos”

Working For Him: If you check the records, you'll notice that the Tony voters looove Christian Borle. He's been nominated almost every time he's been eligible, and he's won twice. You should never count him out for a victory, and in “Falsettos,” he stretched outside his comedy comfort zone to play a gay man confronting the death of his lover and the needs of his family. Plus, this is merely one of Borle's leading roles this season. Voters may not have given any nominations to “Charlie and the Chocolate Factory,” but when they look at Borle's name on the ballot, they'll remember his ability to jump from Marvin to Willy Wonka.

Working against Him: “Falsettos” closed in January, and actors (especially in leading roles) rarely win for performances that the voters can't see this weekend.

Working For Him: Unlike many superstars from the music world, Groban came to Broadway and immediately seemed like a theater kid (He studied drama in high school and college, so… you know… he is). Donning a fat suit and bushy beard, he has disappeared into his performance as Pierre, a Russian intellectual trying to navigate the madness of high society, and his work on the song "Dust and Ashes," which was written specifically for “Great Comet's” Broadway run, is heartbreaking.

Working Against Him: Despite his warm reception in this role, it just doesn't feel like he has the momentum of some of his competitors.

Working For Him: Sit down, because this will take a minute. First, Karl is especially funny in this performance as a weatherman who keeps reliving the same day. His knack for physical comedy has always made him stand out among his musical theater peers, and it's especially valuable here. Second, people really like him. He has a reputation for being a delight to work with, and that means a lot. Third, there's a sense that after doing great work in a middling show like “Rocky,” Karl has finally found a starring part that's worthy of his gifts. Fourth, he just won an Olivier Award (London's version of a Tony) for this performance. And fifth – but really, maybe this is first – he tore his ACL during a preview performance of this musical, finished the show anyway, cried during the incredibly moving curtain call, and then barely took two days off before getting back on stage. The hero narrative, y'all. Believe in it.

Working Against Him: People might see “Dear Evan Hansen” as a more demanding, substantive show.

Working For Him: As a fussy blowhard who doesn't realize he's being slowly turned into husband material, Pierce has gotten near-universal praise for his comic chops in this performance. People like him the way they like Andy Karl, and his reputation got better when word spread that he insisted on being nominated in this category, leaving his costar Gavin Creel more room on the Featured Actor ballot.

Working Against Him: The show is not called “Hello, Horace!” This revival belongs to Bette Midler first and second. It's everyone else's third.

Working For Him: Holy breakthrough performance! Ever since this musical's Off-Broadway run, people have been correctly flipping out over Platt's emotionally nuanced, physically specific, and vocally thrilling work as a lonely teenager who unexpectedly becomes the center of a social media circus.

Working Against Him: Some people dislike the end of this musical, which tries hard to make Platt's character sympathetic in spite of his deceptions. Fairly or not, that may hurt Platt. Plus, Andy Karl has emerged as the greatest trouper of the Broadway season, and that cannot be ignored.

THE BOTTOM LINE: Show-Score members think this is a shoo-in for Platt, but I think this category is going to be a nail-biter! Josh Groban is a serious contender, but the real battle is between Andy Karl and Ben Platt. It's easy to imagine that the fans call this one correctly with the nod going to Platt, but considering his Olivier, his two previous Tony nominations, and his overall popularity in the business, Karl may have a slight edge.

AND THE WINNER IS: Ben Platt, "Dear Evan Hansen"