Best Actor in a Leading Role in a Play

Who’s Ahead in the Tony Races? We analyzed the odds for "Best Actor in a Leading Role in a Play!" 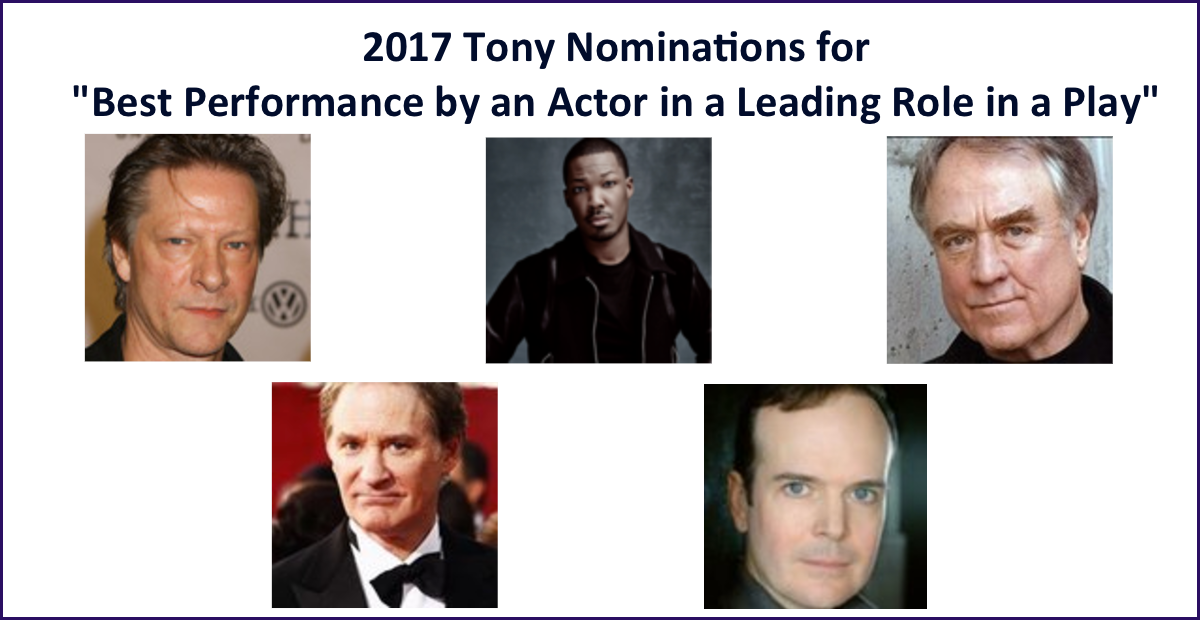 Working For Him: Arndt held his own against no less than Mary-Louise Parker, making you believe that her slightly cracked character would fall for his salt-of-the-earth shopkeeper. Plus, when the script got more intense, he handled volcanic emotions as nimbly as light romance. Since Arndt is a longtime regional theater actor finally making his Broadway debut in his late 70s, he might garner “lifetime achievement” votes.

Working Against Him: Honestly, though, the nomination itself is the lifetime achievement award. Arndt was great in the play, but it closed way back in December and wasn’t a big enough hit to pull votes away from the other nominees.

Working For Him: In this spiritual sequel to Ibsen’s masterpiece, Cooper plays the husband whose wife walked out on him because their marriage made her into a toy. Now that she’s back, he bounces between shock, anger, and guilt, giving the patriarchy a surprisingly human face. Voters will likely be impressed to discover that this Oscar winner has serious stage chops, and since they nominated literally every actor in this show, you’ve got to assume there’s overall support.

Working Against Him: Torvald is the quietest of the play’s four roles, and there’s no denying that A Doll's House, Part 2 is about the women.

(3) Corey Hawkins as Paul in “Six Degrees of Separation”

Working For Him: This revival puts more focus on Hawkins’s con man character than the original production (and subsequent film). As he pretends to be Sidney Poitier’s son in order to infiltrate the lives of wealthy white folks on the Upper East Side, we need to feel his alienation and his desperation to belong, and Hawkins makes it all come through.

Working Against Him: For better or worse, award season champions need a narrative -- the comeback, the breakthrough, the overdue pro. At the moment, Hawkins doesn’t have a story to make his victory seem meaningful. He’s simply an excellent actor giving an excellent performance. That’s not “simple,” of course, but it’s probably not enough. That’s how it goes during award season.

Working For Him: Kline plays the fading and slightly ludicrous actor Garry Essendine, and the reviews have been ecstatic. That kind of buzz is hard to beat. And hey… it’s been a while! Kline hasn’t been on Broadway in almost a decade, and this is a good chance to reward a respected actor that people are glad to have back on the boards.

Working Against Him: Kline refuses to do any kind of press or campaigning around this nomination, which might hurt his chances.

Working For Him: As a politically connected Norwegian sociologist trying to broker historic peace talks between Israel and Palestine, Mays brings urgent focus to this massive play. He always seems human, even when everyone’s debating who’s going to oversee garbage pickup on the Gaza Strip, and the show wouldn’t work without him. Meanwhile, voters are likely to remember him in the broad comedy of “The Front Page” earlier this season, which underscores his versatility.

Working Against Him: Ultimately, “Oslo” is about ideas more than any one character, and that may obscure Mays’s achievement.

THE BOTTOM LINE: Jefferson Mays and Chris Cooper will likely get some votes, but Kevin Kline’s the frontrunner (as Show-Score members predict), whether he campaigns or not.
AND THE WINNER IS: Kevin Kline, "Present Laughter"
<Previous   All Categories    Next>