Best Actress in a Featured Role in a Musical

Who’s Ahead in the Tony Races? We analyzed the odds for "Best Actress in a Featured Role in a Musical!" 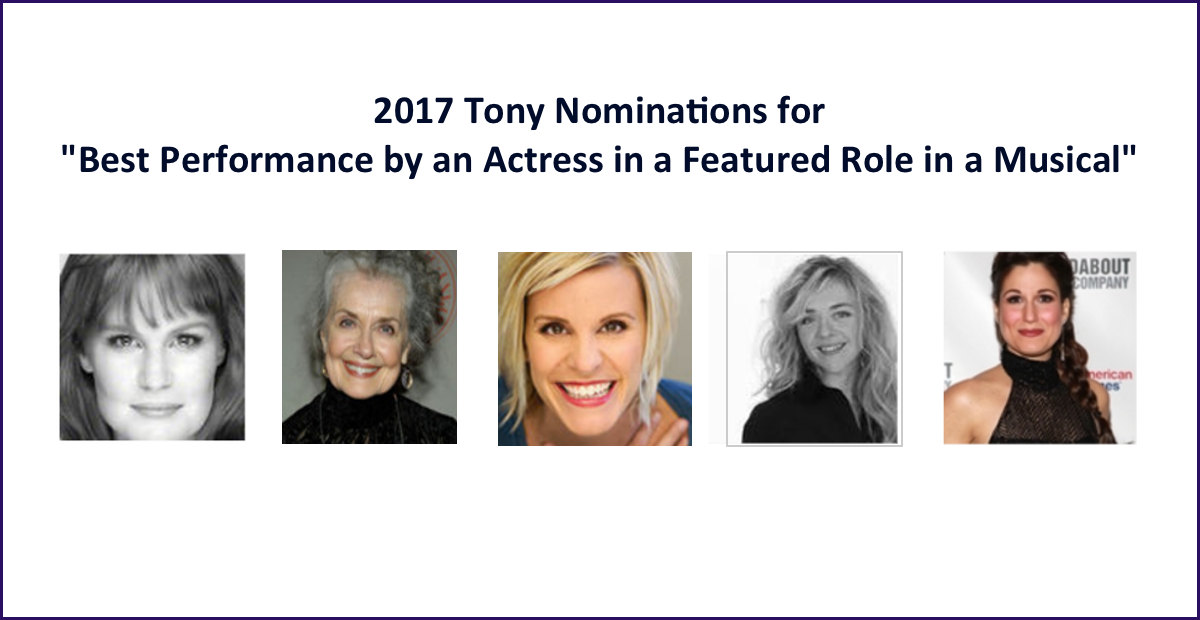 Working For Her: The overall enthusiasm for this revival could certainly help Baldwin, who does her usual charming work as a plucky saleswoman falling in love.

Working Against Her: Even within her own show, her performance isn't getting that much buzz. Still, it's always great to see a pro like Baldwin back on the ballot.

Working For Her: Block's performance of "I'm Breaking Down," a number about a frustrated housewife finally venting her anger, brought brilliant comic relief to an otherwise devastating show. You left the theater remembering her because she added something so unique to the production, and that's what featured performances are for.

Working Against Her: The show closed in January, so nobody who missed it can see her slice that banana in half.

(3) Jenn Colella as Beverley, Annette, and others in “Come From Away”

Working For Her: “Come From Away” is a moving show about the power of a community, which means most of the songs focus on the ensemble. However, as a pilot who gets stranded in Newfoundland on 9/11, Colella gets a big solo number, and she nails it. Since she's the production’s only nominated actor, voters may not be able to resist rewarding her on behalf of the entire cast. Plus, Colella is well-liked in the industry, and after years of toiling away in lesser-known material, she's finally in a hit. People might vote for her because they're delighted for her success.

Working Against Her: One great song may not be enough to push her past performers who get more to do.

Working For Her: Other than star Ben Platt, Jones has the biggest role in one of the season's biggest hits. As Evan Hansen's working-class single mom, she embodies everything from the terror that she's neglecting her child to the furious conviction that other, richer people are judging her life. That complexity is impressive, and it adds to Jones' extensive resume. If voters realize that she has never been nominated before (!!), they might feel like she's due.

Working Against Her: People who leave “Come From Away” in grateful tears might not vote for anyone but Colella.

(5) Mary Beth Peil as the Dowager Empress in “Anastasia”

Working For Her: Nominated for the first time since 1985, Peil is the kind of performer that the Tonys are especially good at honoring: hard-working actors who never become household names but still do years of great work. She's especially winning in “Anastasia,” playing a royal Russian grandmother who dares to hope that her granddaughter escaped assassination.

Working Against Her: Other than a nod for costume design, this was Anastasia's only Tony nomination, which suggests it's more of legacy honor for Peil than an appreciation of this particular performance. That probably won't get her on stage to accept a trophy.

THE BOTTOM LINE: As Show-Score votes might indicate, look for a race between Jenn Colella and Rachel Bay Jones, with Stephanie J. Block nipping at their heels. In the end, Jones and her many songs will probably emerge triumphant.

AND THE WINNER IS: Rachel Bay Jones, "Dear Evan Hansen"
<Previous    All Categories    Next>
Previous
Next