Best Actress in a Leading Role in a Musical

Who’s Ahead in the Tony Races? We analyzed the odds for "Best Actress in a Leading Role in a Musical!" 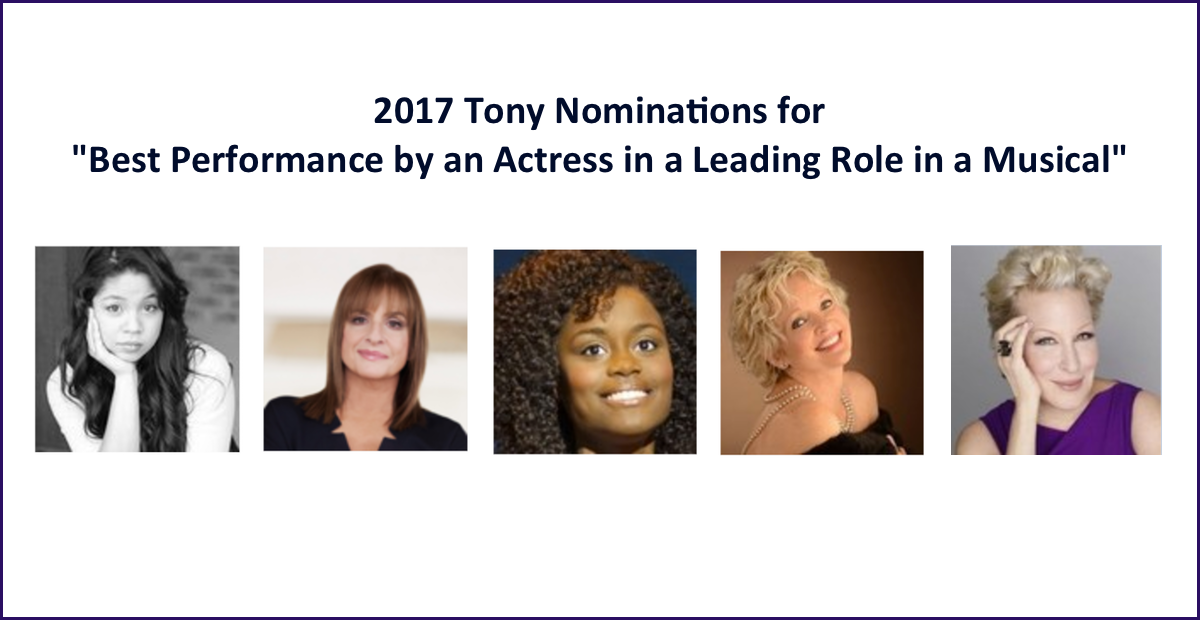 Working For Her: As Natasha, the lovelorn Russian aristocrat, Benton is playing one of the most vocally and emotionally demanding roles of the season, singing operatic songs and despairing about terrible men. She's also making her Broadway debut with a character that she's originating (on Broadway, at least). Some voters may want to go the Nina Arianda route and reward her not only for her work here, but also for her obvious potential.

Working Against Her: Then again, Benton wasn’t the first Natasha. That was “Hamilton” and “Amélie” star Phillipa Soo in the roughly 300 Off-Broadway performances of “Great Comet” that built the show's reputation. Soo was undeniably brilliant – and her performance has been captured on a cast recording that's been available for months – so some voters might choose Team Pippa.

Working For Her: She's a two-time Tony Award-winning Broadway legend originating a character in a musical for the first time in years. (The "originating" part matters, since we don't have the memory of anyone else to compare her to). The show itself – about competing cosmetics magnates Helena Rubinstein and Elizabeth Arden – puts both of its female leads in the spotlight, which means Ebersole has plenty of chances to show off her breathtaking voice.

Working Against Her:  However, Helena (played by Patti LuPone, also up for a Tony) is a much more dominant character. That’s not a read on Ebersole, who is great, but Elizabeth’s anxiety about her country club membership can’t really compare to Helena’s fight against anti-Semitism.

Working For Her: Speaking of Helena: She doesn’t just battle anti-Semites. She also takes on sexists, ageists, and no-good lovers. And not for nothing, but Patti slays every moment. Watching her, it's hard to imagine any other musical theater actress playing this role, and that’s worth voting for.

Working Against Her: People may be having mixed reactions to "War Paint,” but Patti herself is getting universal praise. If it weren't for the next contender, she's be a lock. But then again, that next contender is…

Working For Her: From the moment this revival got announced, the industry and ticket buyers alike have been drooling over the prospect of the Divine Miss M bringing her sassy, brassy energy to the iconic role of Dolly Levi, a matchmaker who wants love of her own. And then Midler blew past those expectations. People love this performance like they love chocolate or kindness or joy.

Working Against Her: There have been reports (including one in Hilton Als' review in The New Yorker) that Midler occasionally struggles to remember her lines and sing the correct notes.

Working For Her: Like Benton, she has the aura of the exciting newcomer, and her performance as Kim, the tragic Vietnamese wife of an American soldier, has been getting excellent word of mouth.

Working Against Her: Still, she just hasn't generated the heat of the other four nominees. But hey, if this nomination is her reward, that's still pretty great.

THE BOTTOM LINE: This category is especially strong this year, with Benton and LuPone looking like potential dark horses. But really, as we can see from the fan vote, there's no way the parade is passing Bette by.

AND THE WINNER IS: Bette Midler, "Hello, Dolly!"