Best Actress in a Leading Role in a Play

Who’s Ahead in the Tony Races? We analyzed the odds for "Best Actress in a Leading Role in a Play!" 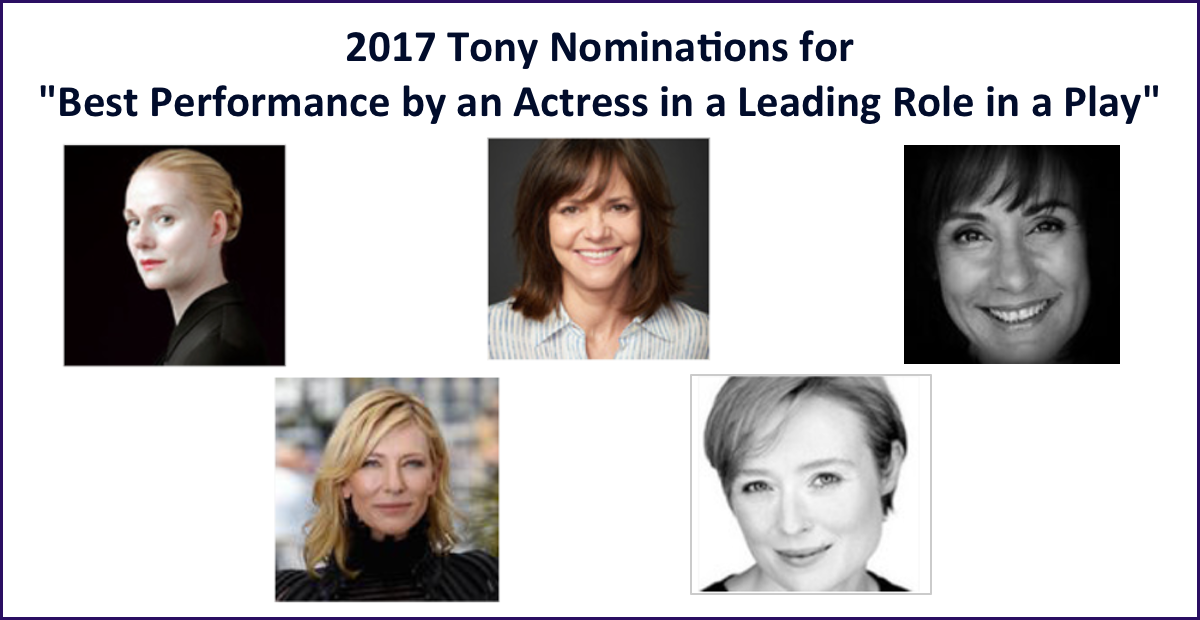 (1) Cate Blanchett as Anna in “The Present”

Working For Her:  Blanchett has a reputation as one of our greatest living actresses, and her work in this Chekhov adaptation, about a wealthy Russian woman clinging to a happy life that’s slipping out of her grasp, proved why. She took some enormous chances with her physical and vocal choices, making herself seem almost feral at times, and that’s the kind of risk-taking that voters remember.

Working Against Her: The play was respected, but it wasn’t a massive hit. It closed in March, which means anybody who missed it can't go back now and see what the fuss was about.

Working For Her: The other actresses in this category are bigger stars, but Ehle’s the one with two Tony Awards at home (for “The Real Thing” and “The Coast of Utopia”). That makes her both the underdog and the proven vet, which is a pretty neat trick. Plus, as a Norwegian politician helping to broker Middle Eastern peace talks, she nails the show’s best speech -- a fiery proclamation about the senselessness of national grudges.

Working Against Her: Though she’s certainly a leading character, Mona is the strong, silent type, meaning that despite that one speech, a lot of Ehle’s work is about listening and responding. Voters might overlook her for competitors in showier roles.

(3) Sally Field as Amanda Wingfield in “The Glass Menagerie”

Working For Her: Despite this being the one billionth revival of “The Glass Menagerie” -- and the second in the last three seasons -- Field still managed to make Amanda Wingfield, the faded Southern belle, feel fresh and alive. This is also her first Tony nomination, so voters may want to reward an actress who’s been a national treasure since the 1960s.

Working Against Her: Then again, there have been a lot of “Glass Menageries,” and even the mighty Field may not be able to shake the “been-there-done-that” syndrome. Plus, the show announced an early closing date, which means voters have fewer chances to see it.

(4) Laura Linney as Regina Giddens in “The Little Foxes”

Working For Her: Linney is double cast in this play about a warring Southern family. Some nights she’s Regina (the vindictive sister out to crush her brothers) and some nights she’s Birdie (the put-upon sister-in-law trying to drink away the pain). She’s great in both roles, but she was wisely submitted for this one, which lets her unleash cold fury like a champ.

Working Against Her: This is a great revival, but does it have the heat of the particularly well-received new plays in the category?

Working For Her: Award seasons need narratives, and Metcalf has a great one: She’s the one who’s overdue. For the last 10 years or so, she’s been giving excellent performances in plays that flew under the radar for one reason or another, and even then, she kept getting Tony nominations. Now, she’s landed in a critical hit with a character that’s worthy of her gifts. As Nora, who’s forced to ask her husband for help after leaving their oppressive marriage 15 years before, she practically burns the stage down with her intelligence and will. It’s the kind of performance that reminds you -- oh yeah! -- she’s been exceptional all along. Some voters will also recall that she got three Emmy nominations last year alone, which underscores how consistently excellent she is.

Working Against Her: Um… aliens might invade the planet before Tony night? Honestly, it’s hard to think of a reason she won’t win.

THE BOTTOM LINE: Even more than Bette Midler, Laurie Metcalf feels like the one true lock in this year’s acting races. Show-Score members predict otherwise, but I believe she’s the right performer with the right role at the right time.
AND THE WINNER IS: Laurie Metcalf, "A Doll's House, part 2"
<Previous    All Categories   Next>
Previous
Next