Best Book of a Musical

Who’s Ahead in the Tony Races? We analyzed the odds for "Best Book of a Musical!" 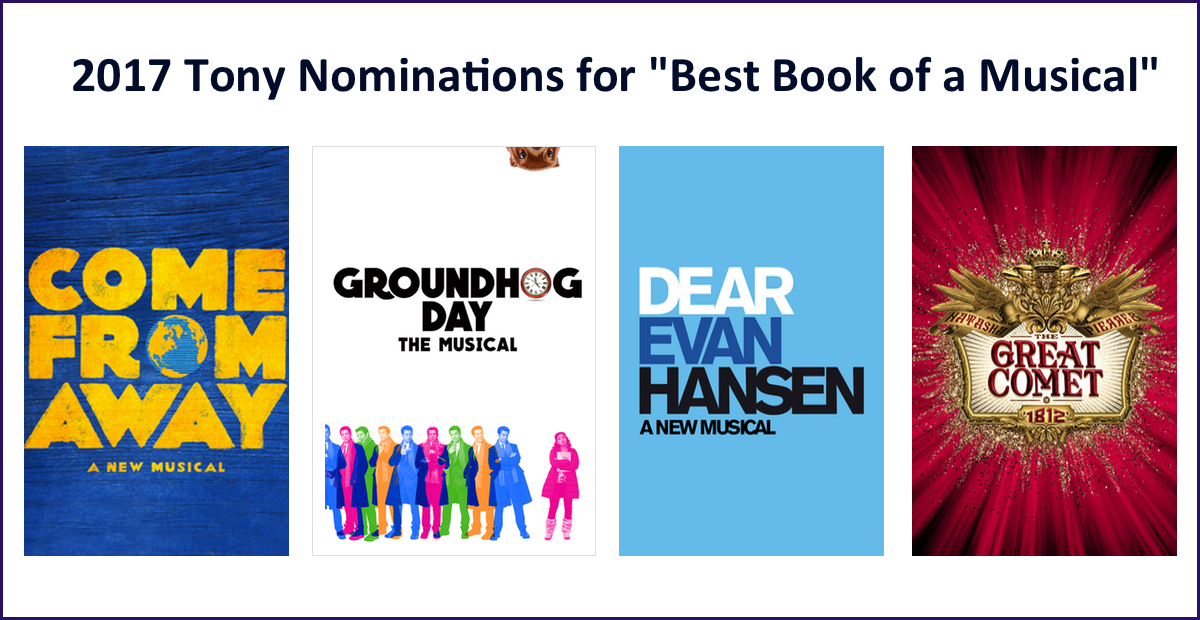 (1) Irene Sankoff and David Hein for “Come From Away”

Working For Them: This show is making us cry because it makes us believe in those selfless Canadians and the diverted air travelers they help on 9/11. Without a great book filled with specific, intimate moments, that authenticity wouldn't be possible.

Working Against Them: Fairly or not, some voters will dismiss the show as being naively hopeful about a terrible act of terrorism.

Working For Him: Even if you took away the songs, “Dear Evan Hansen” would still be a great show. Levenson writes an absorbing tale about a lie spinning out of control, and he layers it with aching stories about kids, friends, and parents who can't see one another clearly.

Working Against Him: The show's naysayers often criticize the story's final section, which they say tries too hard for a happy ending. The blame is more likely to land with Levenson than the composing team.

Working For Him: Rubin wrote the screenplay for the “Groundhog Day” movie, and he's done a good job at translating its cracked humor for the stage. Moments like the car chase scene – where weatherman Phil Connors decides to risk his life, since he just keeps reliving the same day – feel like they would only work in the theater.

Working Against Him: Still, though… a lot of the show's biggest laughs come from jokes that were also in the movie. Will voters give a Tony to gags that got written for a film?

Working For Him: It is a massive achievement to turn a small section of Tolstoy's War and Peace into a musical that feels complete on its own.

Working Against Him: This show is almost entirely sung-through, meaning the characters all sing instead of talk. Since Malloy is also nominated for his work as a composer, voters may prefer to reward his score and give this award to a show that features more dialogue.

THE BOTTOM LINE: This is a tight race between “Dear Evan Hansen” and “Come From Away.” But as Show-Score members predict, since Levenson's work feels more like a serious play, it'll probably get the glory.

AND THE WINNER IS: "Dear Evan Hansen"
<Previous    All Categories     Next>