Who’s Ahead in the Tony Races? We analyzed the odds for "Best Original Score a Musical!" 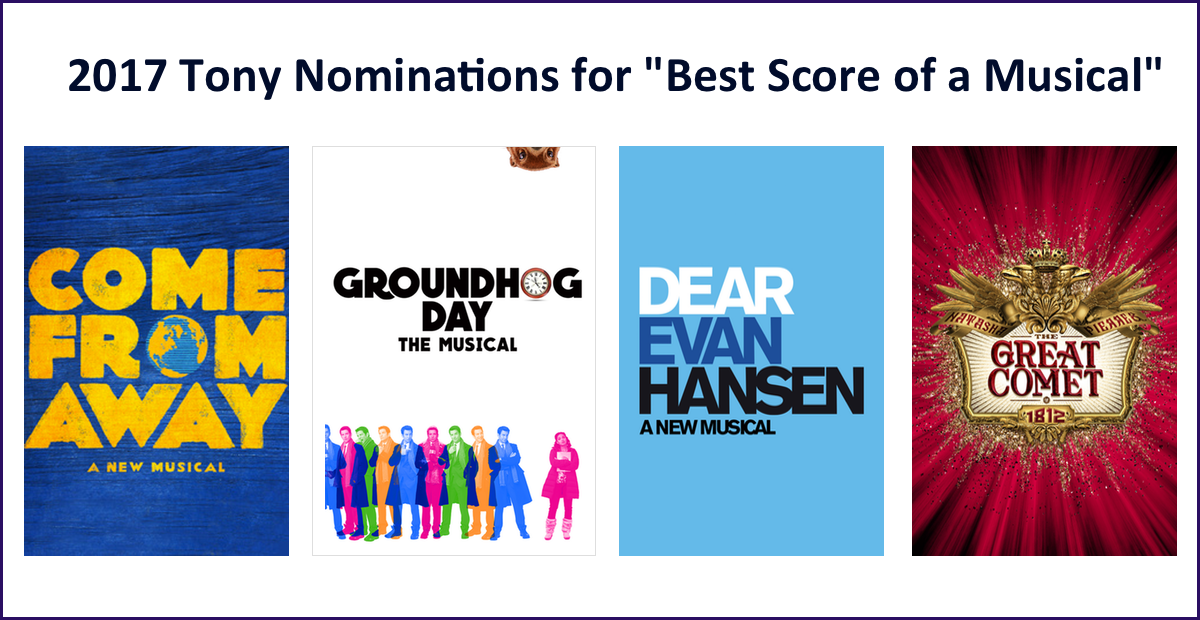 (1) Irene Sankoff and David Hein for “Come From Away”

Working For Them: This score combines all sorts of cultural influences – listen for the Texan fiddles and the African drums – to suggest a vast community of people who are pulled together in the aftermath of 9/11. There are also a few standout numbers that tell moving stories about specific characters in the ensemble, and those will stick in voters' hearts and minds.

Working Against Them: This score is catchy and enjoyable, but some have grumbled that a lot of the songs sound the same.

Working For Them: Next to Lin-Manuel Miranda, Pasek and Paul are Broadway's hottest new composers. That's because of work like this. Their pop-inflected songs for “Dear Evan Hansen” soar with emotion and stick in the brain, and "Waving Through a Window," Evan's first-act showstopper, already feels like a modern classic. Plus, they just won an Oscar for “La La Land,” and later this year, they're providing the score for “The Greatest Showman,” a movie musical starring Hugh Jackman. It was ALSO just announced that Fox is planning a live TV broadcast of “A Christmas Story,” their first Broadway musical. With that much momentum, how could they lose?

Working Against Them: Their Oscar victory earlier this year may be their only roadblock, since voters could think they've been rewarded enough for now.

Working For Him: Just like with “Matilda,” Minchin uses this score to showcase his brilliant knack for funny lyrics that also move a story along. He continues to be a distinct, exciting voice in the musical theater, and the fact that he's on his second show proves he's not a one-hit wonder.

Working Against Him: A score filled with funny songs cannot compete against three scores filled with majestic emotions.

Working For Him: This is one of the most artistically ambitious scores in recent memory, combining everything from opera to techno to acoustic folk. The fact that Malloy wrote it all by himself makes it even more remarkable.

Working Against Him: Some voters may feel alienated by Malloy's more challenging musical choices. Plus, unlike some of his competitors, he didn't win an Oscar this year.

THE BOTTOM LINE: Dave Malloy could squeak out a victory, but we should count on Pasek and Paul continuing their victory tour.

AND THE WINNER IS: "Dear Evan Hansen"
<Previous    All Categories   Next>