Go Back to School With These Musicals

Learn more about go back to school with these musicals 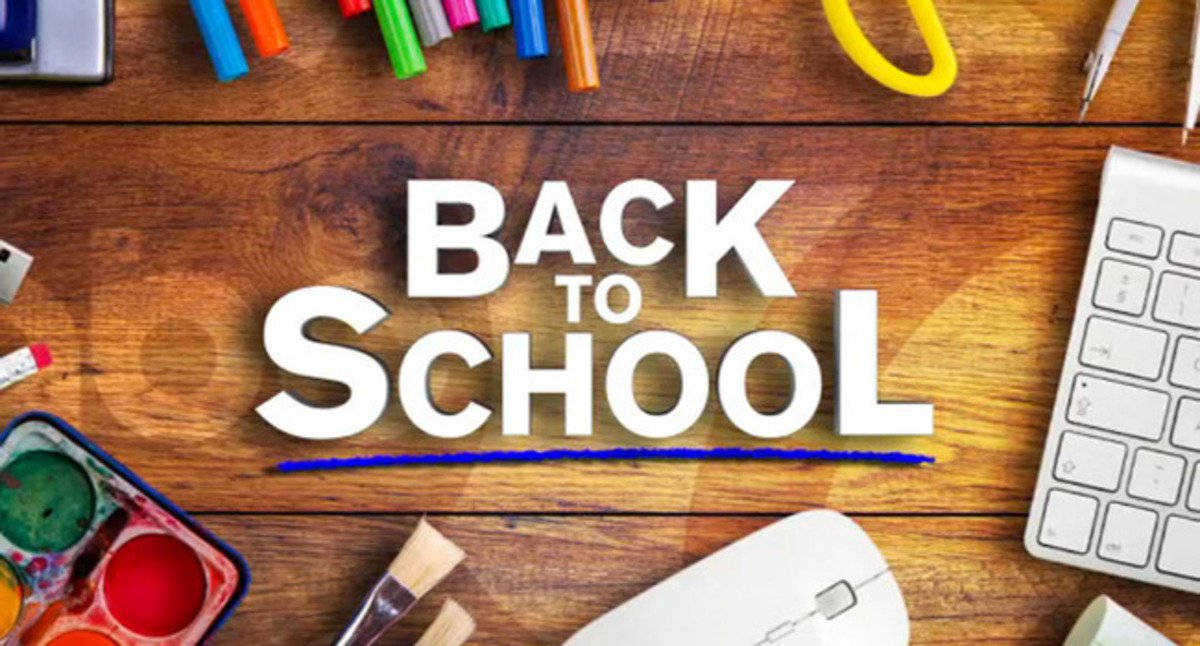 Yes, that is Jesse Tyler Ferguson and Celia Keenan-Bolger. The 25th Annual Putnam County Spelling Bee hasn't been on Broadway since 2005 or the West End since 2011 and honestly — once theater's back up and running like an organized spelling bee — we feel like it's time for a revival. Why? Because it's so funny, surprisingly moving, portrays the awkwardness of middle schoolers in *chef's kiss* fashion, and it's adults playing kids. That last one is hard to pull off but when it works like it does in this show: it really works.

This one feels extra special because not only is Be More Chill all about high school students, but high school students quite literally got the show to Broadway. When the brainchild from Joe Iconis opened in New Jersey in 2015, it was a little musical that could. And then — teenagers found it online. And it became a thing. Not only is the music a non-stop blast (it feels like you're in a video game, in the best possible way) but the story features characters that nearly every past or present student can relate to.

Listen to Be More Chill on Spotify.

Yes, that is Tina Turner AKA Adrienne Warren holding hands with Regina George AKA Taylor Louderman. And yes, this musical is based on the Kirsten Dunst/Gabrielle Union vehicle. Bring It On opened on Broadway in 2012 — with a little creative help from newcomer writers Lin-Manuel Miranda and Tom Kitt. Actual cheerleaders were in the ensemble, it has all of the high school drama (and quotes!) you love from the movie, and the catchiest of songs.

Listen to Bring It On on Spotify.

Come on, it's Grease. It's the most popular kid in school, the senior to everyone else's freshman, the valedictorian. You most likely know Sandy and Danny from the 1978 movie version with Olivia Newton-John and John Travolta. But the story (like so many of the best ones) was onstage before it was onscreen. The musical premiered on Broadway in 1972 with Carole Demas and Barry Bostwick. At the time when the original production closed in 1980, it was the longest running musical in history. The show then became a cultural sensation with the movie and since then it's been back on Broadway in 1994 and 2007 (starring Laura Osnes!).

Listen to Grease on Spotify.

Up until Dear Evan Hansen, musicals in schools portrayed a student experience that wasn't super 21st-century-centric. Evan Hansen is the type of high schooler that just wasn't onstage all that often, especially as the main character. He's a smart and sweet kid who's also struggling a lot with his mental health, the pressures of social media, and a challenging home life. When Dear Evan Hansen opened in New York in 2016, it gave a (beautiful Broadway) voice to experiences that a lot of us are feeling or have felt before, and theater has been better for it ever since. Fun fact: Andrew Feldman took over the role of Evan in 2019 while he was literally still in high school.

Fame did what's now very popular before the popular kids did it: made a movie into a stage musical. It's based on the 1980 film (and 1982 television series!) and — in another very cool move — has never actually been on Broadway, but has rather been staged all over the world for years. So what's it about? Probably the coolest high school in America, naturally. It's set at The High School of Performing Arts in NYC and the story centers around a group of students as their lives become extra dramatic, both onstage and off.

Listen to Fame on Spotify.

Yes, that's Laura Bell Bundy and Matthew Morrison. The names that have made up the "theater kids in Hairspray" table at lunch throughout the years could fill an entire high school auditorium. There's those two in the pic, original Tracy Turnblad Marissa Jaret Winokur, Harvey Fierstein, Zac Efron, Amanda Bynes, Elijah Kelley, Ariana Grande, Ephraim Sykes, and you truly could not stop this list if you wanted to.

Listen to Hairspray on Spotify.

When Barrett Wilbert Weed plays a role onstage that was originated by Winona Ryder in the 1988 movie version, you know the musical's gotta have all of the teenage angst you could ever want. Like Be More Chill, Heathers has become somewhat of a cult fave amongst theater kids. The original production went through four years of readings and small one-off performances before graduating to an L.A. run and then opening off Broadway in 2014. You'll love this one if you love the movie, but also if you're looking for a dark comedy musical that honestly depicts the hardships of hometowns and growing up, via some killer vocals.

Listen to Heathers on Spotify.

Yes, that is Patti Murin. And yes, this is the musical that inspired that moment in the HBO show Girls when Andrew Rannells tried out for a basketball musical. Lysistrata Jones opened on Broadway in 2011 and while it didn't have a long run in NYC, it's a high school memory we just can't forget. Why? Because it sets the Greek story Lysistrata in a high school which makes it educational and, you know, school is important. Because it's about the new girl at school — who is importantly, a cheerleader — convincing everyone at school to stop having sex with the basketball team until they win a game. It's an unbelievable premise! It's absolutely bonkers! It has basketball choreography! A perfect musical!

Listen to Lysistrata Jones on Spotify.

Revisit your childhood with probably our fave student of all time, fictional or otherwise. Matilda is, of course, based on the Roald Dahl classic and (at least in our hearts) the 1996 movie version starring Mara Wilson. The musical was first staged by the Royal Shakespeare Company in 2010 which feels exactly right for Matilda's magical mind. It then came to NYC in 2013 where four actors were simultaneously real-life students and Broadway stars sharing the titular role. If you're missing school in any way we assign you to watch the Tony Awards performance.

Listen to Matilda on Spotify.

When theater's back, you can totally sit with us at Mean Girls. The movie transferred to the stage when it opened on Broadway in 2018. What we love about this adaptation is that it's totally true to the movie, it's got all the iconic quotes, but it's been updated to mirror the experiences of high schoolers in today's age. (It's crazy to think that the movie is literally as old as a high school freshman.) Fun fact: the original Broadway cast had some practice playing high schoolers onstage before coming to North Shore — Taylor Louderman and Kate Rockwell were in Bring It On, Barrett Wilbert Weed was in Heathers, and Kerry Butler originated the role of Penny Pingleton in Hairspray.

Listen to Mean Girls on Spotify.

Take it from me (the writer of this, someone who graduated from an Indiana high school): The Prom is what your social studies teacher would call "factually correct." When I saw the Applebee's in the mall? Chills up my spine. The musical opened on Broadway in 2018 and while it's original run was short-but-sweet, that did not stop me from seeing it five times or from it showing thousands of audience members the power of acceptance — both in yourself and others — and why every musical should have a hip-hop number. (I'm looking at you, The Music Man starring Hugh Jackman and Sutton Foster.) Anyway, if your high school experience wasn't where you felt the most "seen," maybe revisit those halls with this story. It could help.

Listen to The Prom on Spotify.

It's not a "musicals set in schools" roundup without the one-and-only Dewey Finn. Another one-and-only, Andrew Lloyd Webber, transformed the cinema masterpiece into a musical masterpiece in 2015 and the show's been rocking around the world ever since. Just like in the movie, all the kids play their own instruments throughout the show (and on the album!) which simultaneously makes you feel super proud of their skills and left wondering why the only thing you left middle school with was a literal fear of multiplication and division. In other news does Dewey Finn take adult students?

Listen to School of Rock on Spotify.

Students in 19th-century Germany: they're just like us! Spring Awakening is like if the artsy and angsty musical you and your theater friends made up one night at Denny's after rehearsal actually became a real Broadway musical that was super good (not that your production in your parent's backyard wouldn't have been). The original Broadway cast in 2006 starred Lea Michele, Jonathan Groff, John Gallagher Jr., Lilli Cooper, Gideon Glick, Skylar Astin, and the screaming high schoolers who filled the audience each night. Oh to be a high schooler sobbing at Jonathan Groff as he spit-sing-cries to Lea Michele right about now.

Listen to Spring Awakening on Spotify.

We Are the Tigers

This musical is the group of kids at school who are so cool you're almost afraid to approach them. But then when you do, everything changes for the better. We Are the Tigers opened off Broadway in 2019 and it's about the very famous duo: cheerleaders and serial killers. The cast album is spooky and silly and the perfect escape from reality when you're walking down the halls or working from home.

Listen to We Are the Tigers on Spotify.

Honorable mentions: 13, Bye Bye Birdie, Carrie, Footloose, Jagged Little Pill, Vanities, Wicked, and Zombie Prom. Did we miss your fave? Tell us about it on Twitter.