Mariella Haubs on the violin, “A Walk with Mr. Heifetz,” and the nature of creativity

We chatted with violinist Mariella Haubs, who is currently featured in the Primary Stages production of “A Walk with Mr. Heifetz,” about the role of live music in this inspiring new play. 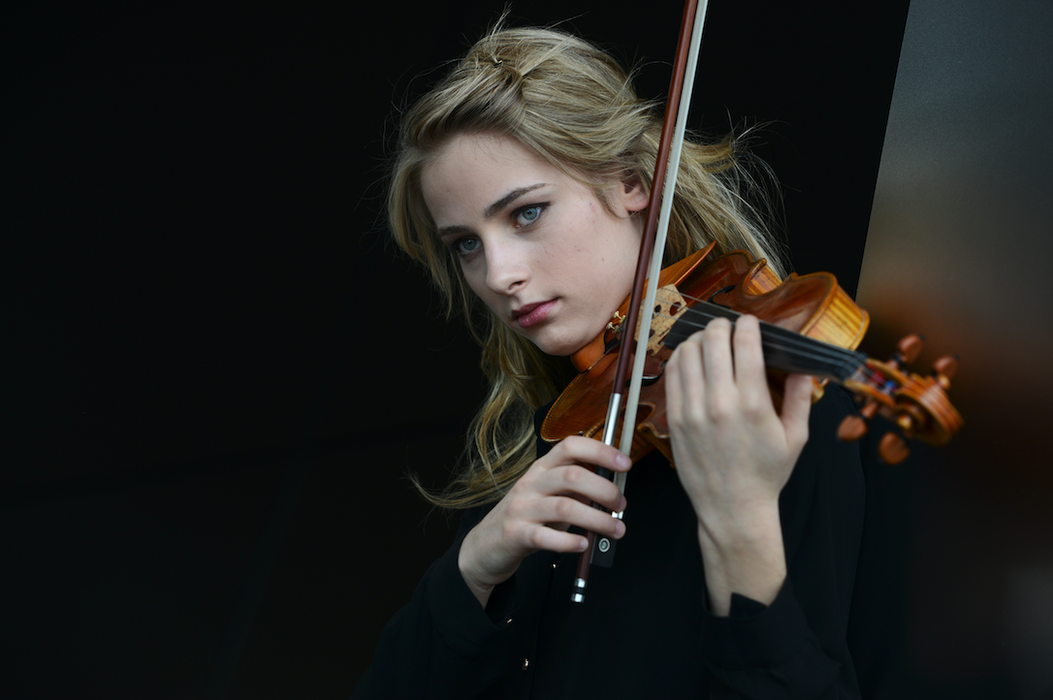 Tell us about your background. When did you begin playing? Why the violin?

I started playing the violin when I was five years old. I actually wanted to play when I was three, but my parents agreed that I was too young and, since we had just moved to the States, I had to learn English before being able to take lessons. When I was eight,  I decided I wanted to play professionally. I heard Itzhak Perlman play on a recording and that was it for me. I wanted to be able to create that sound.

How did you prepare for your role in “A Walk with Mr. Heifetz”? How does it compare to preparing for a concert, for example?

Working in theater is actually quite different from what classical violinists usually do. For a concert, you usually have set repertoire that you practice and refine over a period of many months. Then you play it once or twice and boom, it’s over.

But for “A Walk With Mr. Heifetz,” preparation mainly included getting really familiar with the script and gathering ideas about how the music can fit into it. Most of the preparation was away from the violin.

It was really important to me that the music very efficiently supported the script rather than being a forced add-on. It can be tricky to add violin to an interdisciplinary show successfully. I spoke with the directors a lot going into rehearsals. We discussed my role and the purpose of the music and then in rehearsal we really delved into the specifics: Where do I play? Why? What does it mean here specifically? What type of music? There was a lot of improvising and composing involved.

I love everyone on our team so much. We’ve all become good friends and I feel like I’m coming home when I go to work now! We have a lot of fun, even though the subject matter of the play is quite dark. I think that’s actually part of the reason why we connect so well. We’re working on something really meaningful together and, in a way, it feels like we’ve been through a lot. Everybody is passionate about our art and we’re all working really hard to achieve the purest form of the play’s meaning.

One thing that’s specifically different about being on stage for a play is that, as soon as you’re on stage, the art begins. That’s normal for a lot of performing artists, but not so much for classical musicians. For us, the art usually starts when we put our bow on the string. But in theater, every movement, every gaze, every breath is a part of it. Even though I don’t have any lines, there is a lot of acting involved. I have to make a much wider range of artistic choices, because I’m not just the musical interlude between the words. So every tiny thing I do is intentional. It’s not just about playing in tune, which is every classical musician’s biggest goal in life. (Ok, among other things too.)

How familiar were you with Jascha Heifetz before the production? How did his work influence you as a musician?

Jascha Heifetz was probably the most skilled violinist of all times. He influenced the world of violin playing similarly to the way Paganini did. I’ve been listening to his recordings since early childhood and he’s always been an idol for me and for everyone. He’s kind of like the Michael Jackson of violin playing. He’s particularly unparalleled in regards to energy. He has a ridiculous amount of energy in his tone and of course intonation and technique. I was so excited when I heard there’d be a show about him. This is huge for classical music!

How do you think having live music enhances the show?

On every level. I think it’s really important to show that music and art is an active voice in society, not just an audio track in the background of our lives. In this play, music is literally personified and that’s really powerful. Yehuda Sharett, who is played by the wonderful Yuval Boim, communicates with the music in his head as if it were a person. It’s not just part of him. It’s a separate identity which he eventually learns to make room for. So the play says a lot not just about all the important topics that are discussed, but also about the nature of creativity. It’s not some kind of abstract skill that some people have and some don’t. The best artist has mastered the art of removing everything that’s in the way of honest expression. Michelangelo described creating the Statue of David as “just chipping away the stone that doesn’t look like David.” The play suggests this concept in such a brilliant way. A concept like this would be impossible to portray if the music was just a recording in the background.

If someone likes the music in the show, are there any other musicians that you recommend they check out?

Absolutely. Besides Jascha Heifetz of course, I would highly recommend Itzhak Perlman. He’s my favorite. Also, Josef Hassid. He unfortunately died very early, but he was a phenomenal musician. My favorite recording of his is “Hebrew Melody” by Joseph Achron. There are just so many greats. Nathan Milstein, Isaac Stern, Misha Elman...and most of these guys studied with Heifetz’ teacher, Leopold Auer!

Do you have any pre-show rituals you can share?

I always meditate before I go on stage. I also usually do some cardio to get the blood running, and I spend a little time doing mental practicing. Visualizing the sound I want to create. There are  a lot of tools to draw from and I  adjust depending on what I need that day.

You can see Mariella in “A Walk with Mr. Heifetz,” performing now through March 4.