Our Show-Score Leaderboard Members Show Off Their #YearInTheater!

For some of the most active members of the Show-Score community, it's been a busy theater-filled year! Take a look at the shows they saw, and learn how you can create your own #YearInTheater for a chance to win $365 for theater tickets in 2017. 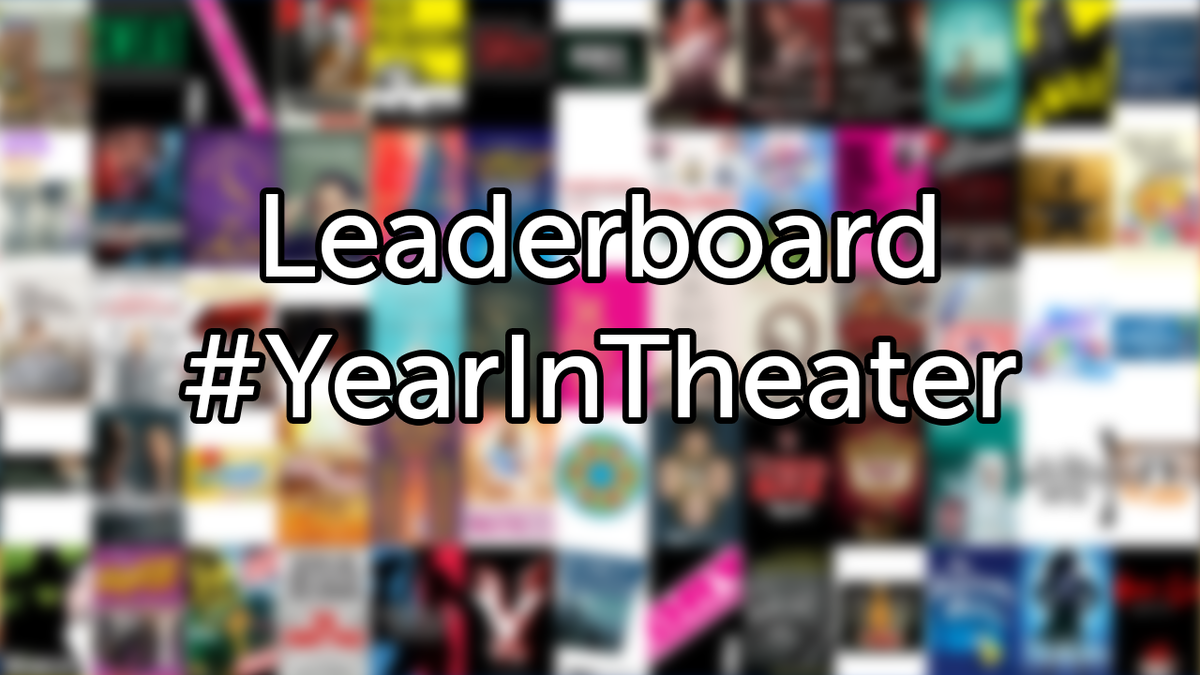 "It's no secret that for many, 2016 was a less-than-stellar year. From politics to major celebrity deaths and tragedies, it was a tough one to get through. Luckily for me—and so many of Show-Score's members—we had theatre to turn to as an escape, and in some cases as a reflection of the reality that faces us each day, allowing us to put current events into perspective. Through my regular volunteer ushering, I've met and had stimulating conversations with several amazing members of New York's theatre community, both fans and pros alike. It's safe to say that in 2016, theatre was my second home." (Read more about Dan Q's #YearInTheater here!)

"Though 2016 wasn't the greatest year overall, a bounty of top-notch theater made up for it—"Taylor Mac's 24-Decade History of Popular Music", "Dear Evan Hansen", "Familiar", and "The Harvest" were among my favorites. And it was the year I saw both "Blue Man Group" and "Perfect Crime"... Happy to finally check those off my list—though maybe "happy" isn't the right word!"
NINWALL

"My husband and I moved back to New York City a little over a year ago after 28 years away raising kids. Now we're empty nesters, and one of the things I promised myself with the move was to fully embrace and indulge my passion for theater, something I had set aside. I think my #YearInTheater graphic really shows I've done that—and it's been fantastic! I feel like a kid in a candy store. My favorite way to see a show is in previews, before the critics' reviews. This really lets me "think for myself", without being swayed by hype or preconceived notions."
SOPHIA C

"A whirlwind of theater. In 2016, I saw some of the most innovative pieces of theater like "Ride the Cyclone" to revivals of classics like "The King and I". I would say this graphic collage by Show-Score sums up my free time pretty well!"
GIL K

“2016 was a great but quite uneven year on Broadway. Phenomenal hits and baffling misses. The 2016-'17 season started strong and the new year has a very promising line up."
GEORGE 6090

﻿
"One of the primary reasons my husband and I moved to New York was to be closer to the city's extraordinary variety of theater professionals and theatrical experiences.  Like most years, 2016 was a year filled with great surprises and great disappointments. "Falsettos" was the most recent great surprise. Earlier in the year, "An American In Paris" and "Fiddler on the Roof" were genuine highlights. We are continually impressed by the great work of NYMF. We saw at least four or five productions ready for Broadway, with terrific music, casts, direction, choreography, costumes, sets, and lighting.  And now, with Show Score's help, we're on to 2017!"
PORTIA

"I focused on seeing Shakespeare this year, so a lot of my out of town theatergoing isn't shown here—looking forward to Show-Score expanding to more cities! Next year's goal: more Off-Broadway, that's where the most interesting stuff is to me!"
ADAM G123

"What an incredible #YearInTheater. I saw 96 of them, many thanks to Show-Score.com! I think I might need a 12-step-ball-change program to ease my theater addiction. On second thought, bring on 2017… I’m ready for more!"
DOUGLAS MARINO
﻿

"From the blood and guts of "American Psycho" to the adorable and talented kids in "School of Rock"; From the fierce battles in "A View From The Bridge" to the comedy and tragedy of "Falsettos"; From the brilliance of an autistic kid in "The Curious Incident of the Dog in the Nighttime" to the romance and musicality of "Bright Star" — it was a marvelous year on the great white way. From "Marjorie Prime" to "Out of the Mouths of Babes"; From the family drama of "The Humans" to the ingenious and smart "Ride the Cyclone"; From "The Robber Bridegroom" to the magic of "Antlia Pneumatica" — Off Broadway had a stellar year. What a tremendous time to be a fan, a regular audience member, and supporter of the arts and craft!"
BRENDON NYC

"2016 was a great year in theater! I saw some really fantastic musicals like “Dear Evan Hansen”, “The Great Comet”, and “Disaster!”, as well as heart stopping plays like “Blackbird”, “A Streetcar Named Desire”, and “A View From the Bridge”. So excited to see what 2017 brings!"
JENNA THE MUSICAL

"2016 was my first full year of living in New York. It was exciting to branch out and discover new theater across the city, rather than just sticking to my usual comfort zone of Broadway shows. Show-Score has had such a great impact on my theatergoing experience. Member Nights are such a fantastic feature!"
JOEYFRANKO

"It's been an exciting year for my theatergoing experiences. I was shocked to find that I saw 210 shows this year. Actually, I know it's more than that. Some shows like "The Encounter", which I saw five times, are only counted once. Every time I saw it, I got a deeper, richer appreciation for the beauty of the piece. I can really lose myself and all my worries at the theater and love that shared feeling of a once in a lifetime moment. I can't wait to see what 2017 brings!"
JEN6044
﻿

""Ideation" at 59E59 was one of my favorite shows of the year. I saw it with my first free Show-Score ticket. It was a really exciting and different story and was incredibly acted. I never would have seen it without the Show-Score ticket! I wouldn't have heard of it. We ended up joining 59E59 after that and have seen 5-6 shows there since then."
Click here to create your own #YearInTheater collage and you could win $365 for theater tickets in 2017! Be sure to get all of the contest details here.