The Shakespeare-inspired comedy is a surprise hit. 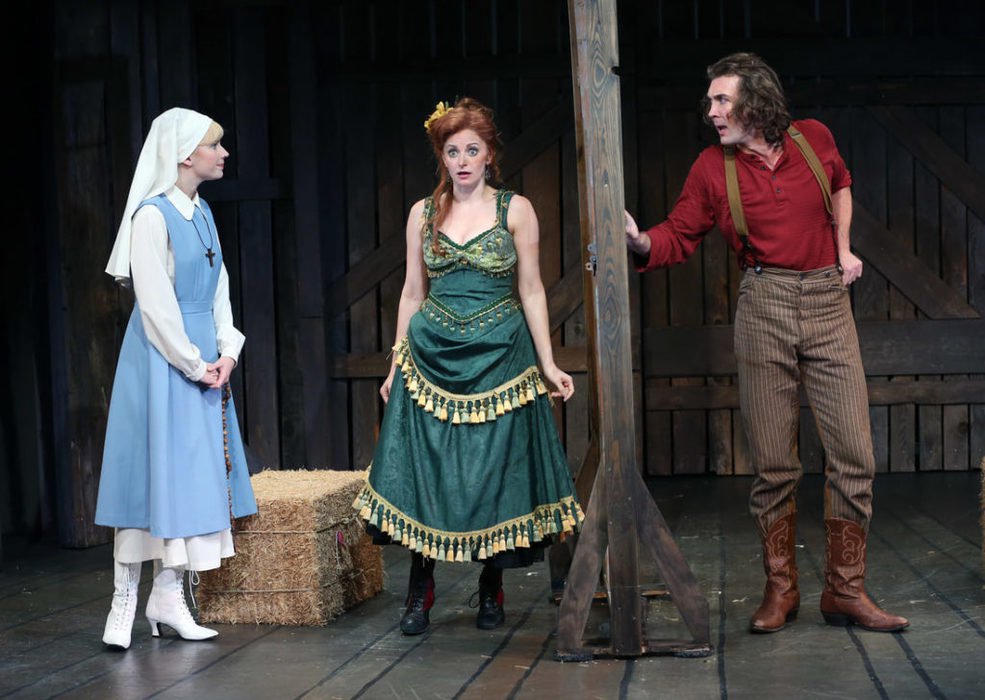 Yee-haw, verily, "Desperate Measures" has been a huge hit kicking off the 2017-2018 Season at the York Theatre Company: Where musicals come to life. The comedy transplants Shakespeare's "Measure for Measure" to the old west where a nun, a saloon girl, and a sheriff try to keep a hot-headed young cowboy from hanging for killing a man in self-defense. The show has music by David Friedman and book and lyrics by two-time Tony nominee Peter Kellogg ("Anna Karenina").

Show-Score sat down with Kellogg to discuss the surprising success of his knee-slapping comedy.

SHOW-SCORE: Congratulations on your third extension at The York. It's a 2017 hit but we hear that you first premiered the show way back in 2004?

PETER KELLOGG: The original version was done in prose in 2004 and then again in 2006. It went OK. I was thinking "how can we make this better?". The verse makes it mock-classical and funnier. We did a version like that in 2012. With the new cast, all of a sudden it went really well.

S-S: So what you're saying is, it's an overnight success story.

PETER KELLOGG: (Laughter) Exactly -- that took 20 years. It just works out that way. I guess it's because musicals are never finished. Every time you do a production, you say 'we don't need this song here,' or, 'we do need a song for this character'. It's a long process.

What have you discovered about "Desperate Measures" in its current life at the York?

In the hands of people who are this funny, it's so much fun to watch. They keep looking for new laughs so that's been great. And the whole sign idea was Jim Morgan's. Why do we need a sign that says "jail" when we know they're in a jail? But once you see it, it's terrific! We create a whole town with signs. That was a happy surprise.

Director Bill Castellino is terrific to work with. He's been very collaborative and he's very good at making cuts. That's another surprise: the show worked fine before but there are always more cuts to be made.

The music is by David Friedman who you usually work with.

My first show was "Anna Karenina" in 1992 with Daniel Levine. But mostly I've worked with David. We have four or five projects together.

Does the music come first or the book and lyrics? Or does it happen all at the same time with your collaborations?

David likes to have the lyrics written first and I'm more comfortable that way, too. I like to have the whole show written roughly from beginning to end. We'll sit down and critique it from there.

You have source material to work from in this case. Shakespeare has been interpreted in a million ways.  How did you even decide on the Old West setting?

We were looking for a different genre or style and it occurred to me that "Measure for Measure" would work great as a western. There's a nun, a man condemned to hang, and the idea of a saloon girl is better than an ex-fiancee. Nobody is going to criticize us for ruining the plot of "Measure for Measure" which is a mess.

I was very pleasantly surprised by this show since I'm not a huge fan of "Measure for Measure". Some of the references are super funny. Nietzsche is not a name you would automatically think of for a rhyming verse show!

The whole "Measure for Measure" thing is a meditation on justice and fairness in this world and the next. I always thought it was interesting that the Old West, where everyone was so backwards, is actually the same time frame that German philosophy is blooming in Europe. 'Is there a God? Is there justice?' -- these are heavy questions we can treat humorously.

Also Nietzsche is easier to rhyme than Kierkegaard.

[Laughter] Sondheim could do it.

I'm sure he could.

Your lyrics are so funny and the verse really adds to it. My favorite is during that mug-a-thon, if you will, in the jail between Lauren Molina as the saloon girl and Conor Ryan as her condemned cowboy boyfriend. It's so infectiously funny.

They feed off each other. The reading went so well but you have no idea what actors are capable of doing until you see them in costumes running around on set.

I know you said a musical is never finished but, after three extensions, is this one?

You know, it probably isn't! David and the director and I have some new ideas but I'm very happy with the songs and the cast.

So, the lesson is overnight success but never stop tweaking. What was the hardest thing about getting it right?

We tried several endings with lots of different songs. Beginnings and endings are the hardest things.

"Desperate Measures" closes on December 31st. Have you seen it yet? What's your favorite Shakespearean comedy?