Dan Quitério is a theatre, film, and TV lover. By day he manages the social media presences of major entertainment companies, and by night he ushers hundreds of shows in New York City. 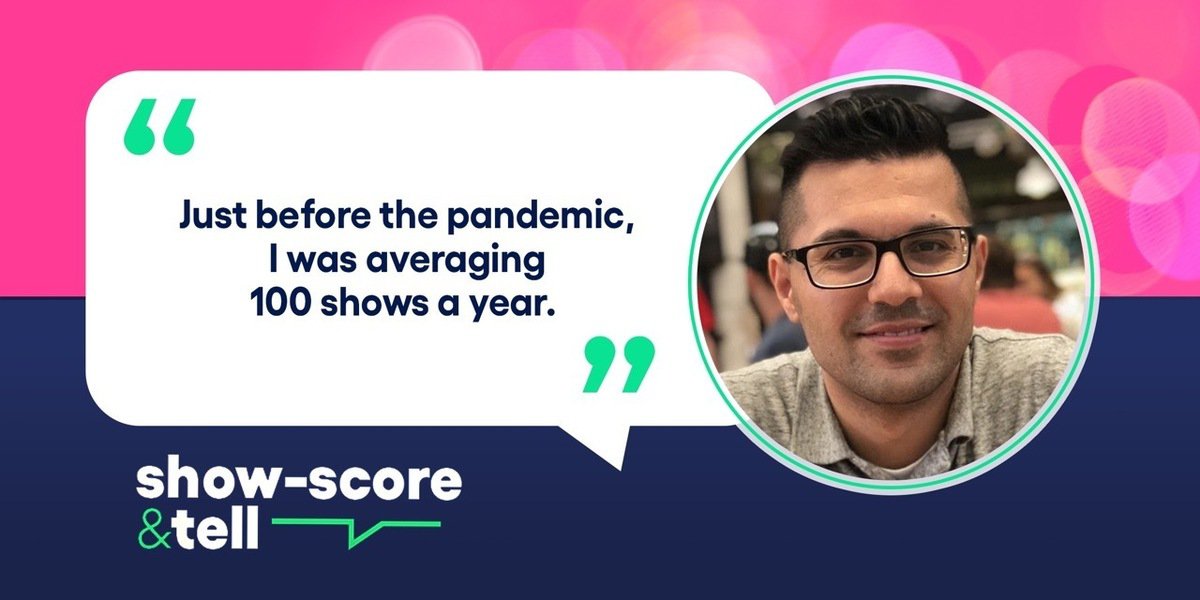 "I worked for several ad agencies throughout my career, but now I’m working on the client side, doing social media marketing. I started out doing social media for TV shows, and I continue that work in the entertainment industry now. My very first social media job involved working on a reality series for E!, and then I transitioned into USA Network series, like Psych, Suits, and Burn Notice. I also worked on a Bravo series and some others. And then it just continued from there.

As for my relationship to theatre? Back in 2008, I was at an agency where we worked on American Express's entertainment-based event marketing. That's actually where my love of theatre started to develop. We would get comp tickets every now and then to Broadway shows. I only worked there eight months, and in those eight months I saw four Broadway shows. At the time, I was like, “Wow! Four whole Broadway shows!” Nowadays? Just before the pandemic, I was averaging 100 shows a year.

I have a very comprehensive Excel spreadsheet of every single show I've ever seen. Right now I'm up to show number 687.

And this includes Broadway, off-Broadway, off-off, regional, local and tours. So it's a little bit of everything. In terms of just Broadway shows, I'm up to 266.

I see a lot of these shows through my volunteer ushering, which I started doing at New World Stages in 2011 or 2012. While I was there, I was talking to other volunteers who had been involved with ushering for a while, and I learned that you could volunteer at all these other off-Broadway--and even some Broadway--theaters. And so I just got on all of their lists. And I've been ushering ever since.

Even though I'm a volunteer I take the job very seriously. Because to me, the theatre going experience isn’t just seeing the show. It starts from the moment you buy your ticket to the moment you leave the theatre. And that includes the interactions that you have with the usher once you're entering the theatre.

I've always really enjoyed working with the public. That's not something that everyone likes. But if I can help guide them, it can really make a person's day.

I know that sounds kind of silly, but it's true. And the same thing translates to my work in social media. When I was working on a number of TV series, and in particular, that show for E!, I was interacting with people as the brand on Twitter. And they didn’t know who I was. But I’d simply like their tweets, and then see people responding with, “OMG, I can't believe the show just liked my tweet!” It's the simplest of actions on my part. And it literally just made their day. So whenever I work with others on a social media team, I try to make sure they understand the value of the work that they're doing, and to never take it for granted. Because it works the opposite way, as well. If you're responding with sarcasm, for example, to someone online--just like while working as an usher--that can sour the moment and give them a negative experience. And you just don't want to do that. I'd rather be surrounded by positive people. If I can shed some positivity on others and brighten their day, then it's good for everybody."

"The current Broadway revival of A Christmas Carol (84) with Jefferson Mays is the best version of that story I've ever seen, and Mays's performance is one of the most incredible I've seen on stage. The first 30 minutes are terrifying, and Michael Arden's direction is inspiring. The sound and lighting design, and the rotating set pieces in the dark that create new environments like magic... I can't say enough about it. I really feel this is the production by which future revivals will be measured.

Of course, Into the Woods (91) . I saw it at City Center, and then again on Broadway, and it's just incredible. The cast is fantastic. I was just talking to a friend yesterday who said that she thinks it's great because of the cast. And I said that I've seen three different productions of Into the Woods now, and they've all been fantastic. I think it's the writing that makes it an incredible show. Of course, the cast is wonderful and elevates the material even more."

To read more of Dan's thoughts on theatre, be sure to follow him here on Show-Score!