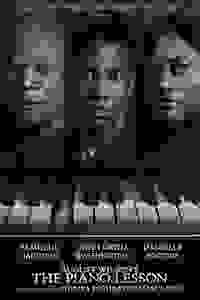 Set in Pittsburgh’s Hill District in 1936, the drama follows the Charles family who can't agree on what to do with an old piano. Boy Willie wants to sell the antique piece while his sister believes the heirloom, covered with carvings detailing the family’s rise from slavery, should remain in the family.

See it if Top notch performances! some solid scenes.

Don't see it if While I enjoyed the story, it felt long w/ some unnecessary scenes. The ending/conclusion felt abrupt & ultimately wasn't satisfying.

See it if You want to be moved…swept away with amazing writing and expert acting from all involved. Phenomenal set design and costumes add to the joy.

Don't see it if You’re looking for lighthearted fluffy mindless fare. This ain’t that. This has meaning on so many levels it’s extraordinary!

92
A wilson great chronicler of u.s. black experience, Superb production of one of a wilson's best plays

See it if Like August Wilson or want to see something different, with a excellent cast.

Don't see it if Long Show with one intermission and slow at time, not fast pace. Read more

See it if You love Wilson plays — this is one of his best, despite a good, but not stellar production.

Don't see it if You’ve seen good productions of this play before and don’t need to see it again.

See it if you’re an August Wilson completist, you enjoy period pieces, or like family dramas.

Don't see it if you’ll have a hard time sitting in a theatre seat for three hours listening to an annoying, long-winded character talk nonstop.

See it if You are interested in a family drama. It’s very easy to follow until the end.

"It’s a play about the possibilities of the present that are cut off when other demands, like those of the past, make themselves known."
Read more

"There’s no doubt that The Piano Lesson is a ghost story...It’s those spirits of Black men that are believed to be responsible for the series of well accidents."
Read more

"Richardson Jackson clearly knows how to direct actors and pulls magic out of her cast, creating a production worthy of August Wilson's legacy. "
Read more

"The play’s characters are so individually well-formed and collectively solid that their voices have a way of lingering in the mind, and Wilson’s language is dramatic lyricism of a very high order."
Read more

"I suspect the production will find a more sustained and smooth groove as the run proceeds. But, in any case, a major revival of a play by Wilson—as great a playwright as America has produced—is a notable theatrical occasion in itself."
Read more

"Before your eyes can settle on any one room of the house, it’s all over, and so, within moments, is the play, bringing a hasty and unsatisfying conclusion to an otherwise well-paced and top-notch production."
Read more