Amy Couchoud is a critic with DC Theatre Scene. This account has been auto-generated, and does not indicate that this person is an active member of Show-Score.com. That said, if you "follow" this member, you will automatically be updated whenever s/he writes a new review. 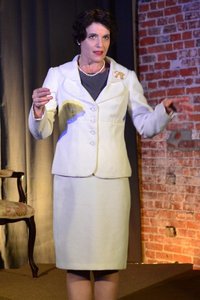 for a previous production "A darkly hilarious, and at times deeply touching, imagining of the private woman behind the public figure of the former First Lady...The script fluctuates seamlessly, and to great comic effect, between the definitely true, the absolutely fictional, and the well, to be honest, I don’t know if it’s true or not...With a spot-on Southern accent, graceful poise, and a commanding presence, Hodsoll convincingly embodies both the public Mrs. Bush we know and Allen’s sassier fictional version." Full Review