Aron Hirt-Manheimer is a critic with Reform Judaism. This account has been auto-generated, and does not indicate that this person is an active member of Show-Score.com. That said, if you "follow" this member, you will automatically be updated whenever s/he writes a new review. 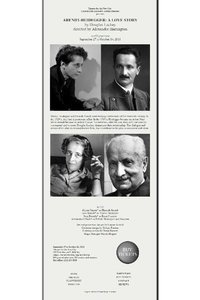 "At the core of 'Arendt/Heidegger: A Love Story,' a new play by Douglas Lackey, is the intellectual, emotional, and romantic relationship between two of the leading intellectuals of the 20th century...In this well staged and acted drama, directed by Alexander Harrington, Hannah and her married 35-year-old professor enter into a romantic relationship...The play closes with a powerful final encounter between Hannah and Martin in the dining room of a Freiberg hotel in 1964." Full Review