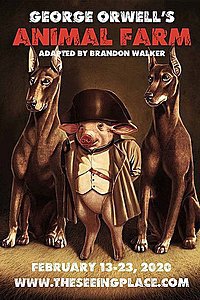 See it if you, like me, appreciate those who understand the message of the novel and can see its resonance skillfully applied to the stage.

Don't see it if you're not in the mood for a more thoughtful theater experience.

Also As someone who has always been inspired by Orwell's novel, it is heartening to see an adaptation such as this one: detailed, engaging, and stark. Everything has been carefully considered: the hay-strewn barnyard set, the sound design, even the unique kinesthetics of the actors. The small cast does an admirable job of portraying the many distinct characters of the novel, often transitioning in split-seconds between the various personalities in a way that is instantly recognizable, conveyed mostly through body language. I was especially impressed by Brandon Walker's interpretation of Napoleon and Boxer, and by Laura Clare Browne's Squealer. The show makes all-too-clear the oppressive nature of totalitarianism and the slow, often subtle ways in which it insinuates itself into society; the triumphant and slightly comical mood in the beginning organically transitions into one of fear, tragedy, and nihilistic banality, just as Orwell intended.