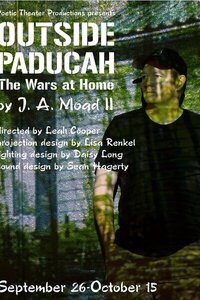 See it if You want real insight, beyond cliches, into the lives of combat veterans and their families.

Don't see it if You're looking for something light and humorous. It has a few subtly comic moments, but this is a heavy play.

Also Relevant for any time (including now) when politicians speak cavalierly of going to war. One of the things that makes these three monologues so compelling is that the characters are full human beings, not just the talking personifications of war trauma. The trauma IS central, but it ripples with all these elements other than war--a love of Johnny Cash, or the way we stumble into love. That matters in a play as heavy as this one. What these characters have suffered is so stark that it could veer into feeling like anti-war propaganda, if they weren't so skillfully handled and well written. (The video elements that complement the monologues also add richness to what Moad is doing.) If I was hungry for one thing, it was a deeper dive--even just a little more--into the female side of war trauma. We get a short glimpse of the hardship of the 7-year-old boy's mother, but mostly the perspective here is male. It's certainly not a deal-breaker, though, in a show this thoughtful and needed.... Read more Read less