Jonathan Zeller is a critic with NYC Go. This account has been auto-generated, and does not indicate that this person is an active member of Show-Score.com. That said, if you "follow" this member, you will automatically be updated whenever s/he writes a new review. 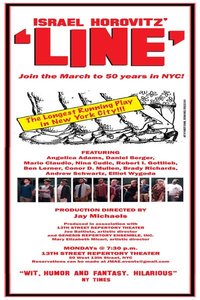 for a previous production "If you're looking for a lesson on theatrical durability to be learned from Line, which has been at the same downtown theater for 40 years and reigns as New York City's longest-running play, that's one of the big ones. The length of the show's run speaks for itself, and it's been translated into more than 35 languages and performed around the world." Full Review