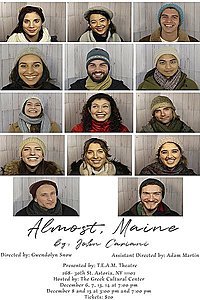 See it if you believe in second chances, in hope. see it if you want to find a gem in Queens

Also I didn't expect an amazing show like this. the space was small so i was really involved up close. The actors were all perfect, i was drawn and invested the whole time. what struck me the most was how fluid all the stories flowed, and how every scene was developed. its like the direction really focused on the essence of the stories. My favorite was the "Story of Hope", the young lady Dorothea Gloria who played Hope showed a good display of versatility and range. She was amusing at first and then through out the scene as it became serious, she made me feel like im feeling what she is feeling. i cant help but get a bit emotional. Ms. Gloria really moved me. and her partner in the scene who is also from Manila was just the right balance. very subtle and mature. i hope i get to see more of Ms. Gloria's work in the future.
Then there were a couple more like "give back the love", and "My Heart" scene. all in all i this production team can deliver a strong show.
... Read more Read less