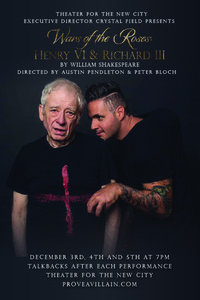 See it if A Must see for Lovers of Shakespeare. The brilliance of joining Henry 6/3 & Richard III brings out all the family drama & humor of the plays

Don't see it if Just go see it

Also Director Austin Pendleton's work as both actor (Henry 6) & Director of the combined plays are inspired. Debra Lass as Mad Queen Margaret is a titan on stage in a massive and massively complex role when combined with the simple grace and power of Johanna Leister is the perfect counterpoint that balances the struggles of the women fighting for a place in their world and to just stay alive within all the intrigue. Their 3 queens scene with the veteran Carolyn Groves is a master class. Finally Matt de Rogatis' Richard III scales the heights and plumbs the depths of the part with skill, emotional power and villainous delight without ANY mustache twisting. A real Richard who is spinning out of control almost solely due to his father's death and the loss of direction and focus that creates in him. The small scale of 16 actors with no set to speak of simply walking on stage and telling us the story renders the play in ways any intelligent theatre goer can follow and FEEL. Bravo to all!... Read more Read less