Peter Wood is a critic with Boxing.com. This account has been auto-generated, and does not indicate that this person is an active member of Show-Score.com. That said, if you "follow" this member, you will automatically be updated whenever s/he writes a new review. 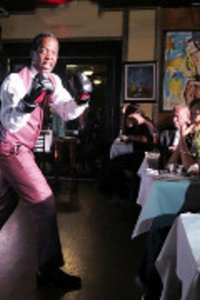 "The play is primarily casual storytelling, recounting the boxer’s tempestuous teenage years, his womanizing, his three marriages, his major bouts, his retirement and his eventual comeback...Wilson’s 'stage' is the entire dining room. Amid the tables and aisles, he occasionally ad-libs in response to audience members, refills diners’ water glasses, and comments on the black and white fight films that are projected onto a screen...Mr. Wilson embodies Robinson admirably." Full Review