New York City | 35-49 | Male
About:  Gain public visibility and awareness for any product, brand, service or event. A smart way to build a fan base, a vibrant segment for targeted campaigns and offers.
3 Reviews
1 Post
3 Followers
0 Following
0 Wish List 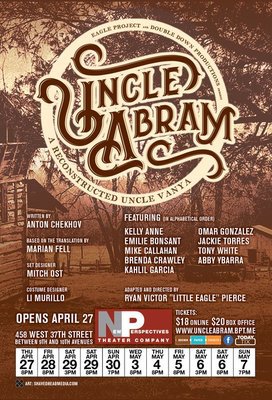 Based on the translation by Marian Fell

Uncle Abram - A Reconstructed Uncle Vanya is an American retelling of the Russian classic set in the Reconstruction South. Placed in a former plantation in south-central Missouri, this adaptation combines Native American and African American influences that both heighten and intensify the original Chekhovian text.

The backdrop being one of the most progressive periods in American history instills a hope of what is possible, along with the awareness of the delicacy of social progress.

Uncle Abram - A Reconstructed Uncle Vanya awakens our spirit for a better tomorrow, and tests our fortitude by begging the question, "What are you willing to sacrifice to change the world?"