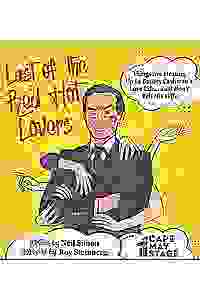 Closed View in admin
Last of the Red Hot Lovers
Cape May
Buy tickets from $27
Score it Scored!

Last of the Red Hot Lovers NJ Reviews and Tickets

Cape May Stage presents Neil Simon's 1969 comedy about a middle-aged married man who decides to indulge his wild side.

Middle-aged and married, overworked and overweight, Barney Cashman wants to join the sexual revolution before it's too late and arranges three seductions: the first, Elaine Navazio proves to be a foul-mouthed bundle of neuroses; Bobbi Michele is next, a 20-ish actress who's too kooky by half; finally comes September and Jeanette Fisher, a gloomy, depressed housewife who happens to be married to Barney's best friend.