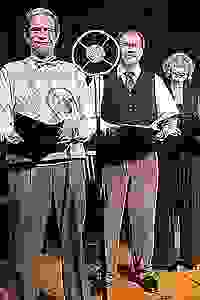 View in admin
Sherlock Holmes Adventure of the Blue Carbunkle
NJ: Cape May
Score it Scored!

"The question is the sequence of events leading from the rare gem, the Blue Carbuncle, at one end, to the stomach of a goose at the other,” says Sherlock Holmes to Dr. Watson as they begin an investigation that might save an innocent man from prison.

So begins another radio-style mystery! Produced with live sound effects and commercials just like the radio shows from the 1930’s, “The Blue Carbuncle” is based on the story by Sir Arthur Conan Doyle, adapted by Craig Wichman, founder and producer of Quicksilver Radio Theater.

Before television and the Internet, people sat eagerly by the radio to hear the latest dramas, comedies, and news. Many radio shows were performed in front of live audiences at the same time they were sent across the "airways."