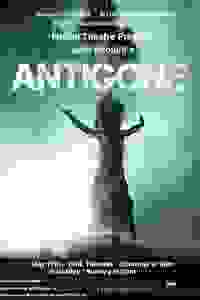 When her dead brother is declared a traitor, his body left exposed beyond the city walls, Antigone refuses to accept this most severe of punishments. Defying her uncle King Creon, she dares to say, "No." Forging ahead with a funeral alone, she places personal allegiance before politics, an act that triggers a cycle of destruction. Fusion Theatre draws its cast from a pool of classically trained actors who are also renowned opera singers in a production that features arias in addition to dialog,

See it if You need an air conditioned room with uncomfortable seats. If you enjoy ear piercing opera moments mixed with a high school level production

Don't see it if If you can think of anything else to do like shining your shoes.

78
Extraordinarily uneven but some thrills

See it if You want to hear some lovely music sung with great fervor somewhat lacking in modulation. Hear an abbreviated old tale.

Don't see it if you need more than a bare stage with a hassock and gold draped pedestal.

See it if you want to see a failed experiment. Greek tragedy with operatic interludes that make very little sense.

Don't see it if you are looking for good experimental theater.

See it if you like minimal (as in nonexistent) sets and an interesting take on a classic play. You like an intimate theatre

Don't see it if sets and costumes are important to you. Read more

See it if Yoru standards are so low that anything touching on ancient Greece, however unprofessional in its presentation, is fine by you.

Don't see it if You expect a modicum of professionalism in any production on a New York City stage.

Don't see it if seating matters to you, these seats are painful!

See it if Seemed labour of love by self directing lead who, though good actress, was 2 old. Antigone MUST b a young woman. Opera thrown in 4 no reason

Don't see it if Was a lazy production-no effort w/staging, props, lighting or costume. Age of 2 "young lovers" being near 40 distracting/play makes no sense

"The acting is impressive on all fronts...I couldn't help feeling that the opera didn't really jibe with the rest of the play. This wasn't because the singers couldn't pull it off but, for whatever reason, the production felt a little disjointed, and the transitions to opera from the script seemed a little awkward. That being said, this sense of disjointedness was the only serious flaw I found in the play, as the acting, singing, and staging were all exceptionally well done."
Read more

"It is painful to see brilliant text landing flat due to bad direction...Fusion Theatre’s production uses ultra-minimalistic scenic design and mostly modern-day clothing, which seems more like the product of a lazy mind than an artistic decision, and it is ultimately a lost opportunity to make a statement...Even though the arias might seem a bit too long and heavy in the relation to the spoken text and are there are no supertitles, these numbers are the gems of the production."
Read more

"The impact is powerful...The sympathetic Creon brings us to a high point of this production: Groen...What an experience, to hear this full, operatic bass not in a vast opera house but in the intimate setting of, yes, Off-Broadway...If there were no other reason to see this play–and there are many others–Groen’s 'Ella Giammai' would be of itself worth all...The acting is for the most part of high caliber...The operatic music was thought-provoking, enriching and a pleasure to hear."
Read more

"Fusion Theatre’s mission is to merge classical theatre with opera...The technique works very well...O’Dea gives a superb performance as Antigone...Groen, as well, gives a marvelous, complex performance as Creon. In fact, the entire cast is first-rate. O’Dea directs the show, and she keeps it sharp and focused throughout...The staging strips drama to bare truth. She eschews theatricality and gives us a direct honesty...This production is excellent, exquisite, a great success."
Read more