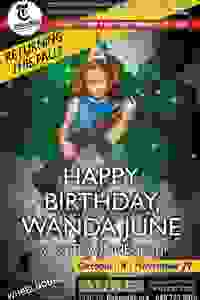 See it if you like the fourth wall broken, like quirky characters​ and historical time frames-and curious outside the box staging and zingy politics.

Don't see it if don't like a show carried by one actor--can't stand too much bombast, uneven performances and long drawn out plots.

See it if You are up for a brilliant, but very tough play depicting just how cruel a man can be. Vonnegut was a masterful writer.

Don't see it if Searing drama is not your thing.

"Although some of Vonnegut's surreal 1970 satire is amusingly dated, there are moments so eerily prescient that you're jolted back to the present...Director Jeff Wise helps his crackerjack cast navigate a tricky tonal tightrope between broad shtick and heartbreaking insight...Even when his absurdist storytelling gets muddled, Vonnegut’s message resounds like the wake-up call of a bugle...The piece is ultimately an indictment of all men who embrace sexism, racism and violence."
Read more

"For anyone willing to look, Wheelhouse and director Jeffrey Wise have staged a marvelous abyss...The growling, slobbering, center of the play is O'Connell, who gives one of the most uninhibited performances I've ever witnessed...All of the actors come together in impressive harmony for the show's flash musical numbers...Wise directs Vonnegut's dark comedy with vaudevillian panache."
Read more

“As directed by Wise, it’s loud and confrontational...but it’s no more than that. Just letting a tyrannical hollow man storm around isn’t enough. It’s less than enough. It’s alienating. Making matters worse, the activities handed the other characters have no helpful afflatus. What must be said, however, is that neither Wise nor the actors should share blame for the two-act, two-hour tedium. They’re trying hard...That onus goes to author Vonnegut. He’s solely responsible for this laughless wonder.”
Read more

"A simple, straightforward style and biting satirical content...What O’Connell manages to do, along with director Wise, is to erase the outdatedness that’s hard to ignore in Vonnegut’s work. O’Connell is a dose of mania, popping in and out of characters and caricatures that are both amusing and infuse the scene with greater nuance...A delightful, wonderfully acted and directed performance that delivers a meaningful message but without hammering the audience over the head."
Read more

“Written by novelist and short story writer Kurt Vonnegut Jr. in the 70’s, this play is even more relevant today...The entire cast delivers captivating performances, but Jason O’Connell as Harold Ryan is not to be missed. This man is so mesmerizing that you cannot take your eyes off him...Wise makes intelligent choices and really allows Vonnegut’s words and ideas to shine through. Not always easy in an absurdist play.”
Read more

“Thoroughly zany in style and performance under the direction of Wise, but it all makes sense thematically in its inherent attack on war, man’s proclivity for killing, inflated heroics and human behavior...The author’s lines add up to a steady beat of stripping away pretension, undermining phony wartime heroism, and mocking machismo...It would be shortsighted to expect a totally logical pot. The acting fits into the concept and mad tone, with excellent cast members.”
Read more

"The glorious production is everything a work by Vonnegut should be: surreal, unpredictable, laugh-out-loud hysterical, extraordinarily intelligent, bold, daring, and challenging...Director Jeffrey Wise has a firm grasp of the material, in total control of the chaos...It’s pure Vonnegut: a potent look at America — and how much it hasn’t changed in nearly fifty years...An all-around triumph, one of the best plays of the season, and a sharp reminder of Vonnegut’s immense legacy."
Read more

"Masculinity gone haywire could be the basis for a pointed satire but the thing about a successful satire is...it’s funny. ‘Wanda June’ mostly isn’t. Mostly it feels as if it’s playing to the cheap seats. It might have had more salience in 1970...Today that kind of material feels as hoary as the mother-in-law jokes the Vegas comics were doing...Satire that amounts to telling the audience what it already believes...isn’t cutting. It’s just flattery.”
Read more

"Vonnegut Jr.’s shaggy but zingingly relevant comedy now getting a ferociously funny revival...As Jason O’Connell proves in a hilarious and explosive performance as Harold, the cult of masculinity that Vonnegut lampooned is still with us, absurd and menacing and terribly, terribly vain...This is quite a departure, and quite a star turn...In the final act, there’s a scene whose resonance now Vonnegut couldn’t possibly have imagined."
Read more

"The play is top-heavy with unamusing exposition; the characters keep coming and going to no purpose, except to engage in lengthy, detail-filled conversations with each other. When a climactic scene is finally arranged, it is as flat as everything else that has come before it. These conclusions are easy to reach because Jeff Wise's staging seems to be right in the spirit of Vonnegut's intentions, with a skillful cast onboard...But much of 'Happy Birthday, Wanda June' dates badly."
Read more

"Vonnegut fans will recognize the genre-busting conceits and madcap non sequiturs, and the play's antiwar, antigun satirical focus is pointed and unambiguous...Not a great play...It is, though, boldly theatrical and has its share of Vonnegut's trademark lunacy and deliciously lowbrow humor...Under Jeff Wise's brash direction, the cast is uniformly strong...The play overstays its welcome in the nearly two-and-a-half-hour running time, but in this production...there is certainly much to celebrate."
Read more

"Vonnegut fans and enthusiasts of extremely broad acting will be thrilled by this revival...It’s rarely performed and this excellent production from Wheelhouse Theater Company demonstrates why...Exuberant dialogue matched with a 1960s biting sensibility, a familiar plot, and Shavian speechifying adds up to a patchy and long-winded experience...Their sterling presentation reveals it to be a piece of its time with little weight that does faithfully convey the sly spirit of Vonnegut."
Read more

"The actors do not disappoint, especially in the performance by Jason O’Connell in the leading role...He is enough to see the show all on its own. As for the play itself, even if Vonnegut’s writing, once cutting edge is now somewhat duller, his absurdist take on the human condition has not dated at all. And if the plotting is clunky (which frankly, it always was), Vonnegut more than makes up for it up by his witty and thought-provoking dialogue, which will forever be linked as his trademark."
Read more

"Unfortunately, and I know I'm an outlier here, this Wheelhouse Theater Company production is overacted, under-funny, and ineffectually directed. The original's three acts are compressed into two, running a talkatively dreary two hours and 40 minutes. Director Jeff Wise isn't able to locate the correct pace, leading to a lugubrious lack of tension. He also fails to create a world in which we can accept the plausibility of these offbeat characters and a sense of their commitment to one another."
Read more

"The play may not be a masterpiece, but the production by the Wheelhouse Theater Company under director Jeff Wise breathes screwball life into it with strong performances and unabashed theatricality...Under Wise’s direction, the disparate elements blend together like some psychedelic head trip...Most crucial to the production’s success is Jason O’Connell’s riveting performance as Harold, even if he often tips into excess."
Read more

"If there is an afterlife, I hope Kurt Vonnegut, Jr., has had the opportunity to look down and watch the Wheelhouse Theater Company's excellent production of his hilarious, incisive farce...directed with vitality, creativity, and respect...O'Connell manages all of Harold's dimensions in a tour de force performance...MacCluggage is every bit as good....A delayed-release show, where you laugh non-stop while watching it yet remain genuinely moved by it afterward."
Read more

"Must a strange, dusty old piece that so efficiently bottled the darkness of the edgy, moody past have to be so damned apt again? I suppose if it must, it might as well be really, really well done, and this production sure is...It zeroes in so brilliantly on some of the republic's most tender bruises...Very frequently hilarious...It's also exceptionally acted...'Wanda June' left me in the most curious state of simultaneous elation and melancholy, but the joy outlasted the sorrow."
Read more

"This darkly comic, often absurd and evocative play keeps the laughs coming while never letting its audience forget the bitter and ugly disparity between old-world misogynist machismo and new-age enlightened, sensitive yet sometimes impotent masculinity...O'Connell's broad-stroked but disgustingly gleeful performance...making him the man you love to hate...MacCluggage is extremely enjoyable and a shining standout...All flourish under Wise's deft direction and capable staging."
Read more