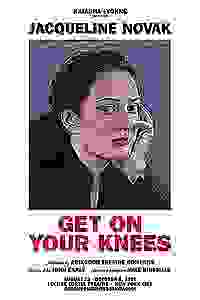 Jacqueline Novak: Get On Your Knees

Comedian Jacqueline Novak’s "Get On Your Knees," the most high-brow show about blow jobs you’ll ever see, returns for an encore presentation. More…

Novak spins her material on the femininity of the penis and the stoicism of the vulva into an unexpectedly philosophical show that’s part feminist outcry, part coming-of-age tale of triumph. Ira Glass calls it a “nearly Talmudic dissection of a subject. Really funny and just really like nothing else.”

Don't see it if You expect more than a repetitive monologue

Don't see it if you don't like very explicit language. It gets extremely raunchy. It is also just a one woman show - more of a stand-up comedy routine.

Don't see it if You are uncomfortable with edgy sexual content about Blow Jobs Don't like solo performers. Have no sense of humor

Don't see it if Performer walking back and forth carrying long cord microphone and sometimes placing fingers in her mouth imitating ...

Also Talks too fast, jumps from one subject to another, feels like she already crossed the line between frisky and dirty. Public (mostly young people) liked it. Several middle age couples left (show goes without intermission, so you really need to dislike what you see to be brave enough to leave).Hooray to those people!!... Read more Read less

Don't see it if The comedian keeps pacing towards SL & SR with no purpose, which drives me CRAZY & DIZZY! The content is at the edge of being tasteless

See it if You want to laugh. You enjoy raunchy humor. You’re a stand-up comedy fan.

Don't see it if You are at all prudish. You are expecting a deep or moving show.

Also Novak is a talented, energetic comedian who easily holds the audience’s attention for an hour and a half. Hyper intelligent and hyper neurotic, her alternately absurdist, poetical and scientific approach makes her exploration of the subject feel less crude. Her jokes are consistently funny. One bit about protecting the fragile male ego had me in tears. She acknowledges recent changes in societal thinking about sex without ever seeming preachy. On the other hand, nothing she says is especially thought-provoking or affecting. While it may feel like we’re being hoodwinked into seeing a stand-up comedy routine, lured by the salacious theme, Novak’s considerable talent makes it hard to walk away disappointed.... Read more Read less

Don't see it if Feels like something being workshopped for a stand up special or a dirty TED talk. It winds up ALMOST-but-not-quite succeeding as either.

See it if You will never regret seeing this show! The thinking person’s comedian. The subject is well, you know. And you WILL know a lot about

Don't see it if A lot of walking back and forth with mic in hand across a wide stage. Novak is not always easy to understand as she speaks very quickly .

Also Jacqueline Novak’s journey to become the Queen of.... Too many laughs to count. The writing is wonderful and performed as if you are in a personal relationship hearing a spontaneous story from the brightest and funniest friend you have. And what a story. One is spared nothing in the way of sexual endeavor and yet the show is never cheap or raunchy. One week left to see.... Read more Read less

See it if You enjoy stand-up comedy. Features a millennial female comic recounting her coming of age and experiences giving oral sex.

Don't see it if You don’t enjoy raunchy comedy. You don’t want to listen to a straight woman talking about her sexual obsession for an hour and a half.

Also Novak does an excellent job exploring the subject of oral sex without seeming crass. She draws a lot from her adolescence and childhood, going on frequent tangents. Yet, she always returns to the central topic. Though the stage is bare, she has an incredible stage presence, with a gift for physical comedy. She wisely avoids being a SJW, instead concentrating on making us laugh. A guaranteed fun night, as long as you’re not a prude.... Read more Read less

See it if you want incisive and witty commentary on gender and sex, ranging from the purely raunchy to philosophical digressions on language and power

Don't see it if you're easily offended/made uncomfortable by frank talk of sexual behavior, your masculinity is fragile, or you're sitting next to your mom

See it if You enjoy smart, intelligent and hysterical theater

Don't see it if You dislike one woman performances.

See it if you want a night of light theater; if you aren't bothered by frank discussions of explicit themes; if you like solo shows

Don't see it if you're looking for a deep probe into the complicated social and sexual dynamics of today; this was fun, but not particularly profound

See it if Want a good night of humor. Great approach to a female view f sexuaity and conditioning.

See it if You enjoy the comedy of Amy Schumer and other "sex comics." Novak is smart and funny but she needs discipline as a performer.

See it if You like edgy monologues with adult themes

Don't see it if You don’t like graphic sexual language.

See it if We were laughing the whole night thru this raunchy and smart monologue on oral sex that especially worked to deflate overpuffed masculinity.

Don't see it if I never lost myself completely like I do with the best comedy -- though was consistently happy throughout.

See it if you want to see a rising star of comedy discuss typically taboo subjects in a sharply written treatise.

Don't see it if you were thinking of taking a parent to see it, or anyone else you might be uncomfortable to sit near throughout this spicy subject matter.

Also It's a bit strange to "review" stand up comedy. The format is by definition, wildly subjective. So many factors can affect one's enjoyment. Are you amused by the jokes? Do you like the performer? Does the subject matter speak to you? I can't speak for everyone or recommend this to all, but I very much enjoyed Jacqueline Novak's show. I was familiar with her name but don't think I had ever seen her perform. This show, which is primarily about her relationship with fellatio, is incredibly well thought out, plotted, and directed by John Early. Although the material is adult, it never comes across as salacious or dirty. It's far too personal to Novak's experiences to just be mere raunch. She's incredibly funny and her delivery & presentation feels unique. Sometimes I feel she would trail off from a set-up or move on from a joke too quickly, but that never interfered with my enjoyment. Things always turned around in a minute or so. She has a hit on her hand here. We need more like this.... Read more Read less

See it if if you enjoy long form standup comedy. one person monologue basically. stories of sexual coming of age per say, personal journey exploratio

Don't see it if offended by talk of oral sex

See it if you're cool

Don't see it if you're lame

See it if You like stand up comedy, one person shows and want to laugh out loud.

Don't see it if You’re expecting a serious plot line and are offended by sex talk.

See it if you like a smart, very funny woman in a show that has more in common with a 90 minute stand-up routine than an actual play

Don't see it if four-letter words and sexual humor offend you, or if self-mockery of one's own intellectual pretentions is not your bag

Also Practically everyone in the audience was younger than I, and they were all roaring with laughter, which was great. There was one particularly bizarre, tootling, seagull-like squawk of delight rising above all the other howls of glee, & Novak did a nice bit of ad-libbing to acknowledge it without embarrasing its owner. I'd probably have laughed harder if I hadn't kept thinking of what Nora Ephron said about watching porn: "After 10 minutes, I want to go home and have sex. After 20, I never want to have sex again." 90 minutes IS a long time to hear about blow jobs. Novak is well-read & wants us to know it (I was dying to correct her pronunciation of the name of the author of "Lolita" - it's Vla-DEEM-ir Na-BO-khov, dahling!) But she's funny, fresh and likeable. Used the stage and the mic very well. One critic called the show "Cartesian," meaning "she overthinks things" - totally valid. Nice use of T.S. Eliot & William Carlos Williams. No Sylvia Plath, whose "eats men like air" would fit.... Read more Read less

See it if you enjoy edgy, female-centered comedy

Don't see it if you expect *theater.* This is a solid piece of standup.

Also She does not suck (pun intended.) But Jacqueline Novak is a tremendous, engaging writer - and a so-so performer. I mean, for a theater person: standup buffs might have a different view on this. With so many A-listers attached to this production, I expected a bit more. I think this piece - possibly empowering for women, funny, and just a tad too long – would, after a few dramatical improvements, make a perfect TV special or a film in the vein of Spalding Gray monologue movies. In theatre, it got me a bit tired. Had a few good laughs tho, and for $20 I paid for it, it was worth a trip.... Read more Read less

Cherry Lane Theatre
Presenter
Get Alerts Alerts On Alerts Off 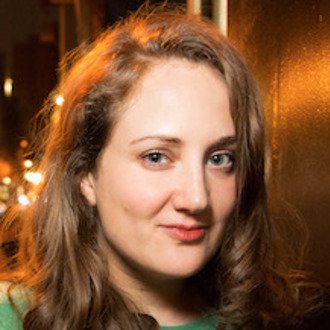 Jacqueline Novak
Writer / Performer
Get Alerts Alerts On Alerts Off 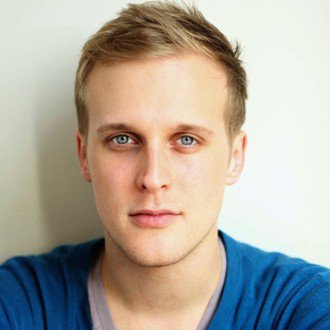 John Early
Director
Get Alerts Alerts On Alerts Off