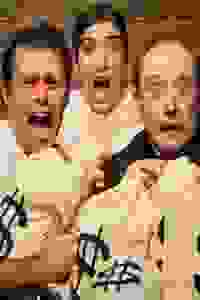 View in admin
Like Money in the Bank
NYC: Midtown W
66
Score it Scored!

Like Money in the Bank NYC Reviews and Tickets

Radical Gags Theatrics presents the world premiere of the first-ever romantic comedy about the founding of the Federal Reserve Bank.

It's 1910 in Chicago, and a suffragist social reformer asks an immigrant mechanic to install a steam boiler. But before they have a chance to turn up the heat, the pair get embroiled in the most romantic issue of the early 20th century: the establishment of the Federal Reserve System.

See it if You don't mind seeing a show that is not the best, but it's cute and you won't have to do any real thinking. Just sit back and relax.

Don't see it if You want a thought-provoking play with some real substance.

See it if You want a night out with a show you can just sit back and watch.

Don't see it if You are looking for a deep and profound experience.

"With a tinge of theatrical storytelling and just a series of madcap conversations, 'Like Money in the Bank' has the makings of an important and relevant piece but sadly comes across as too teachy and preachy and just plain ol’ plain. Polner knows his history. His dialogue reads like a textbook rather than a character-driven play. And his characters suffer for it. As does his plot...Director Shana Solomon’s approach was like a generic comedy. There was no flash or panache."
Read more

"The play takes us back to the early years of the 20th century and styles itself like a silent movie (though with talking). Quick scenes are separated by actors who parade the time and place of the next scene on a board. The style is wittily carried out–it’s fun...The performers, most of whom take on multiple rolls, are polished, talented, witty, and brightly paced by the director Shana Solomon...The play is provocative but doesn’t clarify anything about the bank."
Read more

"This historical play, with a dash of romance and a whole lot of heart, is charming and earnest to the core. Polner’s cleverly constructed script draws the audience into a story some might call dry and boring...surrounding this story of the founding of the federal reserve with an understated love story, more quips than can be found on 'Brooklyn 99,' and the inclusion of the beginnings of the progressive movement...The cast is made up of bold, brassy actors, perfectly suited to a period piece."
Read more

"Though it is well written by Jerry Polner, skillfully directed by Shana Solomon and performed by a talented group of actors, it is too much of a good thing...The audience has a feeling it is being prepped for a mid-term exam...Fortunately, despite this, the show fulfills its designated category of romantic comedy...There is so much good to be said for the production of 'Like Money in the Bank' that one can only wish it hadn’t taken on quite so much history."
Read more