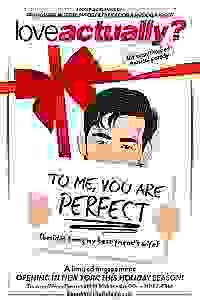 Love Actually? The Unauthorized Musical Parody is a hilarious brand-new musical that follows nine unique couples who attempt to tackle the idea of love during the holiday season, and even 16 years after the movie premiere, we still ask ourselves these questions every Christmas... Will Karen recover from Harry's cliché affair with his secretary? Who's this guy Mark, and why is he hitting on his best friend's wife? How do I sign up to be a "stand-in" for an adult film to find love? Do you really need to speak the same language before proposing marriage? (The answer is yes.)

See it if you want to enjoy a delightful musical parody of British romance movies.

Don't see it if you have not seen any of the movies that are being parodied, since it may be hard to follow.

See it if you are familiar with the movie and its actors and you want to see a clever spoof on them.

Don't see it if you do not like spoofs.

See it if You enjoy parodies. You are familiar with Love Actually. You are okay with very off Broadway settings, eg seats falling apart.

Also Having seen the film will add to your enjoyment, but is not necessary. I was in the mood for something light before Thanksgiving, so intentionally picked a dumb comedy. It was better than expected, with frequently amazing singing and comedic acting. I was particularly impressed with Eric Peters and Kayla Catan, who elevate the production tremendously with their performances. The jokes are fairly raunchy, so think twice about bringing your kids. A great show for date night.... Read more Read less

See it if You want to have fun and laugh 😂. Talented casts. Very relatable, especially if you like the movie. Jam-packed with the unthinkables.

Don't see it if You prefer something more serious or dramatic.

See it if You are a fan of the movie Love Actually, enjoy musicals or parodies and just want to laugh

Don't see it if You are not interested in a parody of the movie Love Actually, are offended by some profanity and sexual innuendo, or dislike musicals.

Also Not a must, but it's helpful if you've seen the movie Love Actually and/or are familiar with other movie work of the actors who starred in the movie Love Actually, especially Colin Firth, Hugh Grant, Emma Thompson and Liam Neeson. For example, if you're familiar with Neeson's work in the Taken movies, you'd understand a reference made in this show. Also reference was made to Emma Thompson in the movie Sense and Sensibility.... Read more Read less

Also I love the movie Love Actually so was excited to see the show. It was very funny and cleverly done. I laughed and smiled the whole night... Read more Read less

See it if you love the original film, but enjoy laughing at it too, this is a loving piss-take of this Christmas classic

Don't see it if you have no connection to the film, as the 'plot' won't make sense. This is for those of us who watch it every year and enjoy its silliness

Also The staging is a wonderful, incredible work ethic from the small cast, who plays a huge amount of characters. The amount of costume changes is boggling!

Some very funny moments, some jokes don't land, but it's a good mix of humor. The creators clearly love the film that they are lovingly taking the mick out of!

See it if You want to see excellent talented versatile actors making you laugh at every turn. The play is cleverly put together as a great parody.

Don't see it if You want a serious play about true love, whatever that may be, actually.

See it if You like parodies and a fast pace. This is a fun show....and mindless.

Don't see it if You want a show that intellectually stimulating.

See it if you know the movie very well and want to see a very talented ensemble cast poke fun at it.

Don't see it if you don't know the movie or you LOVE the movie so much you can't handle a parody.

Also The impressions of the actors Kiera Knightley, Hugh Grant, and Laura Linney were so spot on. Totally worth seeing. One huge oversight was that the people on the sides had a very awkward view of the action; everything was geared towards the people in the middle.... Read more Read less

See it if you're a fan of the movie and willing to have someone poke fun at it. Like the movie, this keeps moving from scene to scene. Very funny.

Don't see it if you haven't seen the movie or don't like silly parodies. This has more singing than dialog.

Also I love the movie and I thought this show was great. Some bits aren't quite as funny as the rest, but this show is 90 minutes of non-stop humor.... Read more Read less

See it if you like farcical parodies and a young, energetic, talented cast with great voices, great costumes, gender fluidity, and lots of fun.

Don't see it if you prefer something more serious or a little more continuity in the "plot" (if indeed there is a plot) or something a bit less raunchy.

Also Although I have not seen or even heard of the movie, I had a wonderful time watching this young, talented energetic cast sing and dance their way into our hearts. It's a goofy parody which reminded me of the Theater of the Ridiculous with men playing female roles and vice versa. It gets somewhat raunchy at times, but my friend and I enjoyed every part of it.

The costumes and the costume changes are eye-catching. This small theater may not be Broadway, but it certainly lends itself to an intimate, hilarious time.

To make this particular matinee show even more enjoyable, the cast introduced an audience member at the end of the show and he lured his reluctant girlfriend from her seat to center stage where he proposed to her. What could be a more fitting ending to the "Love Actually" musical parody than a standing ovation for an "actual true love" ending!

Theater goers should be aware that there is a small elevator around the corner and that's a lot better than the ominous stairway.

See it if you're a fan of the movie. Amazing cast doing unbelievably fast costume changes as the 6 cast members each play several parts. HILARIOUS!

Don't see it if you're not a fan, DO NOT GO!Why be a Scrooge/Grinch this holiday season and drag their show-score score down if you didn't like the movie???

Also If you loved the movie, then you will love this hilarious parody with very clever lyrics. Kayla Catan was my favorite in the show as her facial expressions while playing the Keira Knightley and the Portuguese maid parts were spot on.... Read more Read less

See it if you love Love, Actually and you love having fun

Don't see it if you want to be sad at Holiday time...

Also I enjoyed this very much and I didn't even see the movie.
Well, I saw some of it - about halfway thru and I still enjoyed the show.
I enjoyed the music and the clever lyrics and the costumes. A lot of work went into this parody.
At the end, I could not believe that there were only 6 actors doing all the characters. There must have been a lot of backstage workers helping to change the costumes!

TheatreLover311
New York City
Female
104 reviews
Get Alerts Alerts On Alerts Off
75
Improv masters!, They're on a roll and make your head spin!, A show that turns a very bad movie into a great parody!, 6 actors who get laughs the old fashion way: they earn it!, Funny
November 24th, 2019

See it if You loved or didn't particularly like the movie.

Don't see it if you'd be offended at how 6 comic actors reduce a too-long, kitchen-sink-thrown-in, filled with "celebrities" rom-com holiday pot-luck movie.

Also I found the movie a total waste of time and money. But I understand that the world is divided into those of us that didn't like the movie and those that absolutely loved it and is in fact one of their most favorite movies ever. Go figure...to each their own...

But whichever camp you belong to, this troupe of very talented improv actors will entertain and make you laugh the old fashion way, by using their bodies and voices doing impersonations, singing, running around from one scene to the other until you cave in and think that, maybe, it's worth giving this movie one more try. It's the holidays after all, a time for kitschy traditions.

If you need some cheering up, go see this show. It will put you in a jolly good mood.

Don't see it if you dont want to be entertained

See it if you think Love Actually was an absurd movie and well in need of lampooning.

Don't see it if you're expecting a big, flashy musical. This is sheer silly parody fun.

Also I'm always impressed by these parody productions. A small cast moves at breakneck pace to cover the parts for over a dozen characters, and every part is packed with comedy gold. And they're actually all pretty great singers to boot. Definitely one to check out if you're a fan of rom coms--or, even better, if you're not.... Read more Read less

See it if you really love parody and are a fan of this genre (non-union parody musicals). The staging is clever, as are the hundreds of costumes.

Don't see it if you are looking for an evening of actual Off-Broadway theatre. There is an amateur quality throughout, though the actors are working hard.

Don't see it if you want to see a broadway musical

Don't see it if If you hate the film, musicals, and silly impersonations.

See it if You want to see hardworking actors playing multiple roles in a funny spoof of Love, Actually

See it if You like musicals combined with comedy and raunchy talk. Also if you like British themes and accents.

Don't see it if If you are offended by sexual themes and if you rather see a musical with a more elaborate set.

See it if you are either a fan of the movie or you dislike the movie!

Don't see it if you have never seen the movie.

See it if You are a fan of the movie and know it by heart—if you don't remember the movie well the parody will probably go over your head.

Don't see it if You want a biting roast or a hot take—it is a scene-by-scene recreation and supposed to be dumb and funny, not epic.

Also My partner and I love the movie, so this was a fun date for us, even though it's pretty lowbrow. The actress portraying Keira Knightley was particularly spot-on, and overall we liked the corniness, even though I was hoping for more belly laughs.... Read more Read less 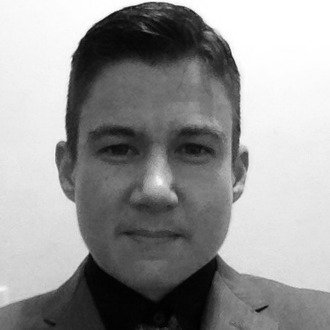 Tobly McSmith
Bookwriter
Get Alerts Alerts On Alerts Off Bob McSmith
Bookwriter
Get Alerts Alerts On Alerts Off