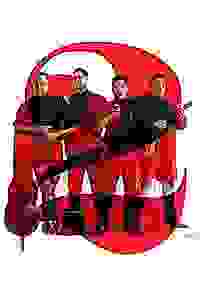 This musical piece weaves together four stores full of heart and revelation that unfold the fabric of Maori musical culture, its genealogy and evolution. More…

With signature style and humour the award-winning MMQ weaves together four stores full of heart and revelation that unfold the fabric of Maori musical culture, its genealogy and evolution.

Layering an earnest and uniquely Kiwi narrative to their soaring harmonies and classic quirky charm, the award winning Modern Maori Quartet invite you to meet Koro, Big Bro, uncle and Bub, and experience their take on what it really means to be Maori in this day and age.

See it if Really enjoyed this cabaret style show with a loose story thread. These guys were authentic and passionate and just having fun.

Don't see it if Shows with limited staging and story.

Don't see it if Each band member plays a character with a cliched backstory. This helps to motivate the songs. However, the banter felt phony.

See it if you like to sit back and enjoy lively music performed with a little comedy and some story that exposes you to a different culture.

Don't see it if if you are looking for a play, though some story is interwoven, this is a musical performance by a talented group.

See it if you enjoy male singing groups. The vocals are fabulous.

Don't see it if you're looking for a theatrical event. This is really a concert. Although some of the songs are not in English there's not much Maori to it.

See it if Quirky Kiwi foursome hoping for a second chance and a last performance in purgatory hell lounge act.Each recalls a sense of Identity. Great.

Don't see it if It's pronounced "Mawhree" not "Mary," which totally changes the intention of the show when term used. Think the Jordanaires in "Blue Hawaii"

Also "How about some Mongolian throat singing?" Well played.

See it if You want a musical about Maori identity through the decades w/a clever & imaginative style. You want a likeable cast performing great music.

Don't see it if You have little interest in Maori culture. You don't like musicals. You prefer shows w/big production values. You dislike intimate staging.

See it if you'd like a peek into a Maori culture by four very talented actors and singers. Unusual plot, 4 time periods accompanied by great singing.

Don't see it if you are not interested in Maori culture or do not like small venues.

Also Avoid this theater if you have problems with climbing steps. There are steps to get into theater, to get to many of the seats and to get to restrooms which are very small. That being said, this was a very talented group of singers and I enjoyed the show a lot.... Read more Read less

See it if quartet of likable singers make u feel like you're in their living room; great singing; funny w/tender moments; interested in Maori culture

Don't see it if not a typical play, more like an intimate cabaret performance; slow beginning with comic dialogue that falls flat

Also The four performers are charismatic. I would have rated the show higher without the beginning silliness and a little more of the good stuff - singing and story.... Read more Read less

See it if You want to hear some music you probably haven't heard before. You enjoy charismatic performers and talented musicians.

Don't see it if Don't come for the banter or the story they try to weave in. Don't see it if you don't like music in another language. Occasionally slow.

See it if Like many marginalized peoples with their cultures and identities suppressed, they tell and sing their truths as Maori men.

Don't see it if Diverse stories / hearing Maori isn't your thing. Simple plot with singing and light humor bores you.

See it if you want to experience the thoughts and emotions of native Southern New Zealanders through cabaret music of the New Zealand Four Seasons.

Don't see it if you don’t like shows that are not traditional, linear plays or musicals, cabaret Four Seasons style, music in languages other than English.

Also The contextual premise of the show is sophomoric and clumsy and detracts from an otherwise enjoyable and enlightening musical theatrical experience.... Read more Read less

See it if You want to see a talented quartet from New Zealand who are Maori. I loved every moment of this entertaining evening. Bravo!

Don't see it if You want a non-musical, this will not be your show. Also, some of the cultural references might be lost on a number of New Yorkers.

See it if you enjoy musical revues.While there's a plot, it's thin; this is more of a musical revue than a play. Singing is great. Performers engaging

Don't see it if you'll be frustrated by the fact many songs are in Maori.While we get the gist of the subject from the plot, no translations are provided.

See it if You’d enjoy Maori songs in quartet's language, how characters got to hell & what they’d do w/ a 2nd Chance. Nice but needs translation!

Don't see it if You want drama or need to understand what you're hearing. (Maori is beautiful) but you need meaning for this once-forbidden language.

Also This show would resonate better with English super-titles for the Maori lyrics we hear (pronounced Mao-ry).

I'd also like to know the songs' etymology and age and something about the Maori sign language (or mannerisms?) and dance used with the songs.

Too bad the producers did not include this info in the program, especially for audiences outside New Zealand.

This is clearly a rich piece but wants for the lack of translation.

Don't see it if you have problems understanding accents, you feel frustrated by the superficial

Also Four Maori men were at their best when singing in their own musical language. Each one portrayed a character with a story, hinting at things in their culture that I wanted to know more about. I didn't appreciate the comedy which may have been funnier in NZ.... Read more Read less

See it if you like excellent singing with strong traditional dances. explorations of other forms of music and dance, t times touching story.

Don't see it if a fairly thin, if sometimes effective, plot. A short show, basically an hour. Not interested in Maori songs and culture.

See it if you're interested in learning aspects of another culture through music and quirky storytelling. Strong singing, fun performers.

Don't see it if you have a very low tolerance for occasionally hokey jokes. They sometimes push the punchlines, but the music and harmonies hold their own.

Don't see it if uninterested in the strong message behind foreign words; You prefer to hear more Maori songs &fewer Western hits.

Also Music coming from the heart, a sense of fun despite some harder moments, depicting a Maori in a prevalent white
society.
Since 19th cent. Maori musicians have incorporated in their 'walata'-song-
western styles such as soul, reggae, rock, hip hop etc.Interestingly, all formal speeches are followed by a walata sung by the speaker & their group supporters.
After wowing audiences @ Edinbourgh,
Adelaide & Auckland Fringe, MMQ will surely conquer US next, both for their talent & their relevant universal message.

See it if You like good singing with good harmonies. With a good storyline. Nice a-cappella! !

Don't see it if You expect singers with an orchestra backing them up.

See it if First-to laugh, then to learn. Enjoyable fringe-take with song, “dance”, multi-talented performers on Maori culture in NewZealand See it

Don't see it if Parts are spoken or sung in Maori or if you can’t take social commentary delivered with humor and heart.

67 reviews
Get Alerts Alerts On Alerts Off
86
Something different, Great singing
January 15th, 2020

See it if You are interested in Maori culture, soulful songs and storytelling, or learning about other cultures

Don't see it if You are bothered by songs and some dialogue in an unfamiliar language, or prefer a more traditional play rather than a cabaret style show

Also Amazing singing, storytelling, and modern take on Maori culture. If you've done the tourist shows in NZ, there are familiar moves and styling, but these are stories of modern life.... Read more Read less

See it if you enjoy beautiful singing and dramatic stories of the characters' "truths" as they straddled two worlds in various eras.

Don't see it if you find the premise of the singers trying to escape from purgatory off-putting and swings from silly humor to seriousness a bit jarring.

See it if If you like witty, funny, wonderful singers who are completely entertaining. If you like to learn something new.

Don't see it if If you don’t like to hear people singing some songs in English and some songs in another language you may not understand. Otherwise I can’t

Also I thoroughly enjoyed it as did the 18 year old I brought with me. I looked over at her and she was smiling and laughing where appropriate and taking in the social injustice that was being talked about. Thank you for bringing this to NYC.... Read more Read less

See it if you enjoy music from another culture and like a show that moves from humor to poignancy.

Don't see it if you dislike songs not in English, and have little patience for a show that builds slowly to its point.

"Seems like a Las Vegas-like lounge act [with] an oleaginous Rat Pack rapport…. Yet, it's a testament to the talent and charisma of the performers, and the beautiful harmonies of their songs, that the chintzy framing of the show doesn't smother its appeal."
read more
Get Alerts Alerts On Alerts Off