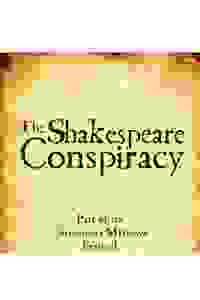 Murder, mayhem, and manhunts abound in this dramatic examination of the underbelly of London's Elizabethan theater, and the conspiracy surrounding the true authorship of the works of the Bard.

'The Shakespeare Conspiracy' spotlights two conspiracy theories that have fascinated historians for centuries: how could William Shakespeare become England's greatest playwright virtually overnight when he was just a nameless actor who had never written anything before? And how could Christopher Marlowe, known spy and the previous reigning playwright in England, be suspiciously murdered and quickly buried in an unmarked grave just days before he was to be tried for treason?

See it if you don’t care that a play plays fast & loose with literary history, just so long as it has fun doing it.

Don't see it if you are unable to set aside a preposterous, chronologically impossible conspiracy theory & just enjoy the amusing mayhem it permits. Read more

See it if The story is not bad, it's funny and enjoyable.

Don't see it if You have issues with same sex love, and friendship. Read more

"For those who revel in historical deceptions, the play offers a fair share of intrigue and conspiratorial confirmation...While 'The Shakespeare Conspiracy' has a good deal of melodramatic twists and turns to hold one's interest for most of the two-hour running time, it is not likely to change the mind of people who believe that Shakespeare did indeed write Shakespeare's plays...The characters are too thinly drawn and the periodic plot holes quickly skirted to make a compelling case."
Read more

"This clunky though vigorously performed and presented fantasia posits one of the more arguably outlandish theories of Shakespearean authorship...A choppy series of overheated episodes and vignettes spanning 40 years...with plentiful and heavy-handed dialogue...Karafin has assembled a talented multiracial company who variously perform with classical and contemporary verve...Still, it all does get wearying over the course of two acts...It’s full of sound and fury signifying nothing."
Read more

"The clever and most entertaining production reveals superb direction and adroit acting by the ensemble...The arc of Bacino’s and Cadigan’s play solidly develops this adventurous intrigue with rationality so there are few logical gaps...Almost apologetically described as a gay romp, the tone of the play is comedic. However, there is underlying depth and emotion...The actors are invested so the humor appears fluid and facile...I heartily recommend this production as a must-see."
Read more

"An imaginative representation of this time period and the questions arising from it...The plot has more twists and turns that bring it to quite a surprising ending. Strong acting develops the characterization on stage which is so crucial to the story line. Under the direction of Karafin, suspense and downright scary moments at times develop the plot and makes it very believable...A superb production to see."
Read more

“With quite a few twists and turns and eventual murder/suicide the Conspiracy unfolds. It’s very much of a thriller and much better than Agatha Christie's murder mysteries...Throughly engrossing. The whole ensemble is wonderful...Karafin has done an enormously brilliant and superb job directing this very complicated and difficult play. He has created an atmosphere of darkness and shadows which are perfect for the mood of this play...A beautiful, sensitive and delicious accomplishment.”
Read more