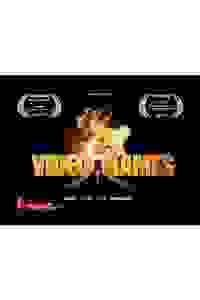 Part of FringeNYC: Princess Zelda, the Queen of The Console, is celebrating the 64th Annual Video Games and needs the audience’s assistance (through the use of social media) to ensure that this year’s Games are bigger, badder, and bloodier than the year before!

FROM THE ARTIST:
A parody of the popular book/movie series The Hunger Games. The tributes participating in the Battle to the Death have been substituted for video game characters from all the popular video game franchises. Ranging from Super Mario to Mass Effect, a selection of popular, iconic characters will compete to win the coveted title of “Player One.” From voting for their favorite character to saving them from certain death, the audience will be able to alter the course of events throughout the performance. Twelve different fighters, twelve possible winners; all depending on your vote.

May the odds be ever in their favor.

Here’s what people are saying:

“There are so many classic moments that are recreated that will titillate your nerdgasm to the extreme… If you like the idea of the concept and consider yourself a pretty big nerd… you will have a ton of fun watching this show.” – Benjamin Schwartz

“I highly recommend this show for anyone who wants an evening of action-packed laughs and a taste of nostalgia. Whether you claim Nerd Culture or not, go enjoy the obvious hard work this team put into the production. Top notch fights, with top notch laughs. I vote “The Video Games” to be around for awhile. Have Fun!” – Ethan McDowell

“I have now seen this show three times and each time has been beyond excellent!! This show is an hour of just pure theatre enjoyment… I love how different each show has turned out while still maintaining the spirit of my favorite childhood video games. I’ve said it twice, I’ll say it again-go. See. This. Show! I will be, without a doubt!” – Brice Williams

“If you’re looking for a show that speaks to your inner child, look no further. Gamers, geeks, nerds, improv lovers and stage combat fanatics, unite! This is one show you cannot miss.” – Francisco Merino

“If you have not seen this show already you must do so. Such a goofy/enjoyable time. The combat was insane. The actors went full out. The improv was hilarious. Way worth your time and money. Go support! They are onto something.” – Melita Camilo

Don't see it if you don't like video games.

See it if You like comedies and video games

Don't see it if You want to see something serious

See it if you are a gamer and like Hunger Games!

Don't see it if you are not a gamer

See it if You like shows with audience interaction or if you're fan of video games or the Hunger games.

Don't see it if You want a clear straight forward story line. You don't like actors interacting with the audience.

Don't see it if You are very rigid and feel it is a waste of your time as an adult to watch a show with video game elements.

See it if You want to see some pro-wrestling-level stage fighting, and if you laugh about jokes about Super-NES games from the 90s.

Don't see it if You don't play video games, or if you want a particularly deep plot.

See it if you want characters from nintendo, playstation and xbox fighting to the death in an audience choose your own Battle Royale.

Don't see it if Video game jokes would fly over your head. If you can't work a console don't expect to be wowed by this show.

See it if you have a wealth of knowledge about Video Games and have seen/read The Hunger Games or if you like stage combat.

Don't see it if you want a serious plot with developed characters.

"Franta and Pugmire do a remarkable job staging a staggering number of fights with different possible outcomes that look polished, fun, exciting, inventive, and safe all at the same time...The large ensemble cast does a stupendous job of embodying the essence of their video game personas...If you grew up playing 'Mario Brothers,' 'Mega Man,' 'Donkey Kong,' 'The Legend of Zelda,' and/or 'Final Fantasy' you will love it. If you weren't into video games you will still have plenty to enjoy."
Read more

"An exceptionally smart concept. It is desperately seeking guidance and a strong outside perspective to assist to bring in a stronger plot and character development...It needs to feel unpredictable. It's clear that there were certain outcomes that were planned and thusly felt staged...There was an overall sense of discomfort from the cast. The play just needed to be tighter...There is great room for progress...'The Video Games' deserves an extra life. It's marketable."
Read more