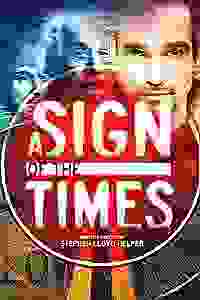 From the show:
At a personal and professional crossroads, a man becomes a Stop/Slow traffic controller outside a construction site in an effort to catch his breath and simplify his life. With his wit and vivid imagination, he invokes Shakespeare, Einstein and more visionaries on his emotional odyssey. Though he tries valiantly to distract himself from the pains in his present from his recent past, it’s through the saving grace of time that he reclaims his future.

Join him for his entertaining and soulful investigation of life’s meaning in an uncertain world. Part joyous comedy, part thoughtful tragedy… it is the entirety of life in 95 minutes.

See it if You want to see Javier Muñoz.

Don't see it if You find solo/one man shows difficult to get through.

Also I don’t know what happened. I mean I do... there are awkward moments in the “story” where we learn about this character. I have never seen a sign holder on a construction site move so much!! The story is not developed well and somehow layers in text by Shakespeare and Theory from Einstein. I did not know by I needed to care or really why we were paying attention to this moment in this characters life. I am not sure if the theory and immortal text from the bard were used in the best light... of only to amp up the weak and confusing dialogue. Too many non developed ideas... physics teacher tuned stop sign holder, dead 7 yr old son, he might have homosexual feeling for his good friend, and now let me talk about Shakespeare and Einstein . I don’t know if me just saying this is valid or not. However, I do not take away that fact that Javier did do an 90 min play and get there from beginning to end. So he made it to the other side.... Read more Read less

Don't see it if You are tired of cliched writing with a half-dozen, poorly-formed story lines including an irrelevant coming out subplot. (So novel!)

This is an indulgent piece for theater majors.