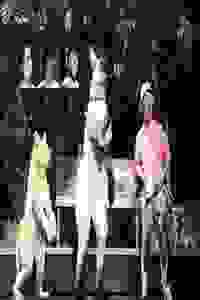 View in admin
Kafka on the Shore
NYC: Upper W Side
89
Score it Scored!

Kafka on the Shore NYC Reviews and Tickets

In a tale of two parallel journeys, 15-year-old Kafka and an imaginary friend run away from home in search of his estranged mother and sister and to escape an Oedipal curse. His journey runs side by side that of a fellow searcher—an old man with uncanny abilities seeking a magical stone he believes will offer divine guidance. As their journeys entwine in modern-day Japan, reality, dream, and myth converge in an allegorical tale that resonates viscerally but resists logical explanation. Helmed by acclaimed director Yukio Ninagawa, who turns 80 years old this year, and with an all-star cast including Academy Award winner Rie Miyazawa, this play receives a sweeping cinematic treatment that brings Murakami's bestselling text to visual life.

See it if You love Murakami; this production totally got the feel! You want to explore interesting staging.

Don't see it if reading subtitles, somewhat contrived intertwining plotlines and Oedipal stories will bother you

See it if you want to see an internationally acclaimed auteur weave a magical, winding tale with spectacular visuals. ...you love Murakami like I do!

Don't see it if you like straight uncomplicated story lines, you dislike ambiguity, or if you don't have the patience to sit through 3 hours of theatre.

Don't see it if you like linear, kitchen-sink dramas that are traditional, realism, short pieces (it's 3 hrs long), supertitles w/your show

"Visually arresting but ponderous three-hour production...Galati does a smooth job of streamlining the book, but as is often the case with stage versions of novels, story tends to take precedence...Even with an extensive running time the production does not allow for the characters to inhabit our imaginations as richly as they do in the book."
Read more

"For a good stretch of its three-hour running time it's all quite entertaining, thanks to the sheer audacity of its imagination and welcome doses of surreal humor. But the longer the evening goes on the more frustrating it gets, with the particularly oblique, glacial-paced final section seeming to not just slow down time but reverse it."
Read more

"At three hours, the show loses magic by cramming in too many details from the novel’s storyline...The sense of enchantment that defines Murakami’s story comes across best in the amazing design work under the masterful helming of the director...Neither light nor sound can fully penetrate the deep, dark landscape of Murakami’s mind."
Read more

"Murakami’s novels often involve flights of fancy that make them hard to adapt...Director Yukio Ninagawa and his cast pull it off — at least for the play’s first act...After intermission, though, things grind to a halt, the magic replaced by cloying affect and confusing mumbo jumbo that will charm Harukists but bore everyone else."
Read more

"Audacious in its ambition but not fully satisfying in its execution, 'Kafka on the Shore' possesses plenty to admire but not quite enough to adore. Still, while it doesn’t quite achieve the level of theatrical lyricism it attempts, this production does find an exceedingly accessible tone, lending a gentle, deeply humane sensibility to a play filled with philosophical aspirations."
Read more

"A fluid journey where time is relative and nothing is mundane, 'Kafka on the Shore' is intense, engaging, and erotic...If you are looking for a theatrical experience that could be described as Zen meets avant-garde, 'Kafka on the Shore' may be your kind of show...If you embrace the experience of this play, Kafka and Nakata's crisscrossing journeys have the potential to grip you. But remember, you have been warned: you cannot check your brain at the door."
Read more

"Even if the narrative is top-heavy with themes and ideas, including the circularity of time and the shifting nature of identity, the staging is riveting. A world poised between reality and dream, which embraces everything from wild forests to neon-lit urban hells, and introduces characters ranging from talking cats to Hegel-quoting sex-workers...The play quotes Yeats’s epigram that 'in dreams begin responsibility.' One might add that dreams can also end in a sensuous theatrical spectacle."
Read more

"Frank Galati's adaptation can tease out its parallels - so Kafka muses on Adolf Eichmann at the same time as Nakata witnesses mass 'catricide' - but the story refuses the centrifugal logic of good drama or the connective logic by which theatre makes meaning. It's more nebulous than that - and it's possible Murakami's saying something quite simple in quite over-complicated, wishy-washy ways. It all teeters on pretentiousness."
Read more

"The delight — and irritation — of Murakami’s 2002 story is that it slips and slides between fantasy and reality so that, as in a dream, every time you think you have fathomed its meaning it slithers again from your grasp...Director Yukio Ninagawa does a magnificent job of bringing this enigmatic work to the stage...To enjoy it, probably best not to seek sense, but just go along for the strange and beguiling ride."
Read more

"The success of telling such a story is largely dependent on the strength of the actors embodying the two men on journeys. In the case of this production, the two leading actors aren’t quite up to the acting challenge. It’s a formidable one...While this production is far from perfect, I give definite kudos to Artistic Director Richard Henrich and his creative team for taking on the ambitious project."
Read more

"Alternately maddening and gratifying. 'Kafka' is gorgeous, poetic and enigmatic. Every action, character, place and object within Murakami's densely, double-plotted story symbolizes something else. Scratch the surface and you find your peering down endless, twisting rabbit holes of myth, legend and subtext. 'Kafka' requires that you succumb to what you don't understand. You'll never get it all. So rather than fretting and frowning because you won't, it's best to just let Galati's searing stage pictures and the dreamy elegance of his adaptation just wash over you."
Read more

"Director Yukio Ninagawa is known for his style and his image making. With his designers, he has done it again... Frank Galati’s adaptation makes things seem simpler than the novel with its tightened storyline while still leaving the audience to sort out what it is all about. Ninagawa’s production is so theatrically engaging—even its slow gliding scene change is mesmeric—that even if you are still left wondering what Murakami is saying you will have a satisfying three hours of theatre.﻿"
Read more

"Tumbling dreamily into the world of Japanese magic realism, Yukio Ninagawa’s spectacular production is one of the more visually striking plays of the year...Marching very much to the beat of its own drum, Ninagawa defies notions of theatrical logic as we might see them and even if it isn’t always completely successful, it is most thrilling to watch."
Read more

"If you are looking for the straightforward tale, you had better not venture into 'Kafka on the Shore...' a time bending, universe altering postmodern coming of age story...After an utterly delightful first act, Galati’s adaptation begins to unravel, splintering into more parallel universes than a string theorist on crack. And the production that began as a crisp, wonderful dream-play of anima and animus archetypes ends as a collection of favorite truisms and talking heads, which might be fine for a Dr. Phil interview about growing up, but does not do as well on stage where seeing is believing."
Read more

"The control and detail of the performances are equally breathtaking...They are supported by an outstanding cast, and the tireless stagehands, who got a well deserved curtain call of their own. The adaptation, on the winsome side of cute, has its longueurs, and if you’re a cat-hater with a preference for a clear narrative line, this isn’t the play for you. But anyone else will find it hard to resist the tender playfulness of this beguiling production."
Read more

"A theatrical event that is stunning, dark, playful, frightening, charming and beautifully abstract. The lines between reality and dreams are erased, creating a bizarre exploration of philosophy, responsibility, Karma, sexuality, magical realism and a number of other elliptical themes...This is a rare and wonderful theatrical impracticality that should not be missed."
Read more

"The transference of Murakami’s work from page to stage is a successful one in most parts. Where it fails to better the book is in its inability to authoritatively separate the dialogue from the previous medium. Watching the stage version, you can never escape the source material because of a dependency to use dialogue lifted directly from the book. In some ways this adds a level of poetry to the script, but mostly it feels as though the characters were limited by the dialogue. In its language, the production was too eager to remain faithful to the master without truly committing to this new world of communication that the stage offered."
Read more

"A mesmerizing barrage of elusive, impressionistic, dream-like stage pictures stitched together...There is a fairly rigorous and explicit logic at work in his adaptation and careful readers will be rewarded, amused, and most importantly, enriched by Galati’s version. Those who haven’t read should be just as well rewarded. If nothing else, viewers will agree the show is visually compelling and, all told, it’s also an impressively faithful compression of a 500-page novel.
Read more

"An ever-shifting mirage where dream and reality, past and future, here and there all twist and collide. It’s a book about ideas, encompassing western philosophy, Greek tragedy, psychoanalysis and science fiction. It should translate horribly to the stage, but legendary director Yukio Ninagawa is up to the challenge...The acting is excellent and a genuine love of the material shines through. It’s a tour-de-force adaptation of an unadaptable novel."
Read more

"As astonished as the audience was, the novelty soon wore off and those compartmentalized sets became obstacles to the flow of the drama. They started to dominate the stage rather than complement performance, especially when it took a considerable time to shift the set-boxes around...Despite these performances, though, perhaps we should take 'Kafka on the Shore' as an exception that proves the rule when it comes to Ninagawa. There’s no doubt that the director can be a genius on the stage. It’s just here, unfortunately, it seems to rather baulk the flow."
Read more