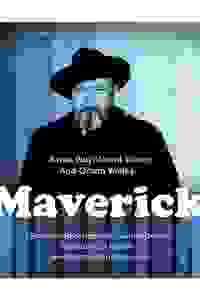 This world premiere drama tells the story of its co-author's experience collaborating with Orson Welles in the months leading up to his death.

In early 1985, then-video production company owner Frank Beacham embarked on a groundbreaking creative journey with revolutionary technology—the Betacam—and a true entertainment Maverick, Orson Welles. With the first handheld camera and recorder combination, the two were meant to revolutionize the way art gets made—bypassing the gatekeepers and putting the responsibility of art back into the artists’ hands. Told through a series of flashbacks, including glimpses of Welles’ masterpieces "Citizen Kane" and "Touch of Evil," and featuring cameo characters of Hollywood legends like Merv Griffin and Zsa Zsa Gabor, as well as TV host Robin Leach, "Maverick" traces the last great artistic endeavor of a multimedia mastermind that was intended to change the playing field forever.

See it if Good acting and a decent story about Welles. Good directing and lighting.

Don't see it if If you want a story that needs development and more work to it.

See it if you'd like a glimpse of Wells, mostly in his declining years. Some good acting, lights and sound but something is missing to improve this.

Don't see it if you do not like a lot of scenes or actors playing multiple roles. The story has promise but it's in need of further development.

"Boring is not a word often associated with Orson Welles but that’s what 'Maverick,' a leaden theatrical fantasia based on his monumental life and career, manages to be...Instead of an artfully whimsical take, this adaptation gives us a lumpy Welles 101, ticking off familiar events laden with the tritely imparted theme of the artist versus cold Hollywood capitalism...The bare essence of a plot tediously revolves around the development of a new video camera."
Read more

"Demas is terrific as the auteur-magician; he might not be as big as Welles was in 1985, and his voice is not as deep and resonant, but he wonderfully captures Welles’s deceptively whimsical nature, intense curiosity...and endless imagination and charm....There’s a franticness to it all that matches the legends of Welles’s working methods, where anything could happen at any moment, all overseen by an iconoclastic mastermind and ambitious visionary who was so often ahead of his time."
Read more

"The play’s style is stark, terse, and direct, like the text. The gray garb of all participants except the three leading players creates a pleasant monotone sense of a black-and-white film—Welles’s métier...Not as exciting as it could have been, perhaps, 'Maverick' offers a welcome glimpse into an earlier era of theatrical activity, and into the personality of a genius who burst like a flaming candle onto the scene and, sadly, flickered out at the end.”
Read more

“In this pleasant and meandering memory play, we are told over and over that Welles was a genius...but we are never really shown this, and Welles and the many other characters...feel like only the outlines of people...It is overstuffed with short scenes and undeveloped characters...Frank himself never emerges as a full character...We don’t really feel how this extraordinary experience has affected him, even while we’ve enjoyed spending some time ourselves with Demas’s Orson."
Read more