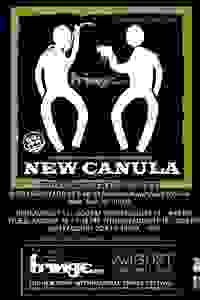 Part of FringeNYC: An unromantic feel good comedy in one act. A hapless unromantic with an immediate urge toward the afterlife; a desperate bank robber with nebulous ties to the underworld; and Grandma Betty with limitless Jersey-style homespun wisdomisms ... It’s New Canula. More…

The Story: Think classic comedy, Reservoir Dogs without a reservoir, a dude play with a twist. Take J. Dubbs, a hapless unromantic with dreams of the afterlife being preferable to his present one; Marion "Bull" DesCarzo, a desperate bank robber with nebulous ties to the underworld; and throw in Grandma Betty, a framed photograph with limitless Jersey-style homespun wisdomisms...and you have an unclear and confusing sense of what New Canula is really all about.

SEE ALL REVIEWS
Sort by:
I
IS
Livingston

See it if seeing just a seedling of a good idea is all you need to enjoy your night. The script is way too repetitive and utterly predictable.

Don't see it if you like self-indulgent scripts and horribly mismatched actors playing alongside each other.

"For such a relatively short show, 'New Canula' provides a lot of laughs. Dark comedy is the name of the game, and both Simpson and actor/writer Cremeans undoubtedly have a strong talent for it...Tension quickly fizzles out in the middle portion...With exposition and character development often d...
read more
Get Alerts Alerts On Alerts Off
for a previous production "A classic double act, but with an absurdist philosophical twist you never saw in Abbott and Costello…The repartee and comic timing are delightful, as tough guy and straight man Bull feeds set-ups to banana-man loser J Dubbs, who responds with snappy, self-effacing one-liners…Don’t miss this prov...
read more
Get Alerts Alerts On Alerts Off