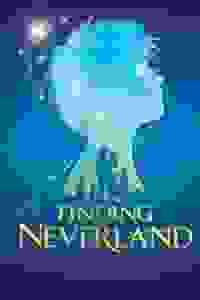 Direct from Broadway, this touring musical is based on the film of the same name about the man behind Peter Pan, as he summons the courage to become the writer–and the man–he yearns to be. More…

'Finding Neverland' follows playwright J.M. Barrie, who needs a big hit to save his floundering career. He finds the inspiration he's been missing when he meets a beautiful widow and her four young sons. Delighted by the boys' escapades, Barrie conjures the magical world of Neverland and writes a play unlike any that high-society London theatergoers have ever seen. It's a tremendous risk, but as Barrie himself has discovered: when you believe, you can fly. Directed by Tony winner Diane Paulus. Best for ages 7 and up. Click here to read reviews of the Broadway production.

See it if you are a fan of the Peter Pan story and want to learn of its origin. The beauty of this show is in its portrayal of loss. Amazing tech!

Don't see it if Though I have read some negative reviews of this show (from the B'way production), I honestly don't know how people can not like this show.

Also I LOVED the Broadway production of Finding Neverland. As someone who who lost both parents in the last 4 years, this show has helped with my healing. I scored the Broadway production an enthusiastic 100; this production slightly less at 91. In the touring production, the very beginning and very end of the show have been changed. I think they changed the beginning for time, but lose some elements of story exposition. At the end, some of the dialogue/action was cut (again, perhaps for time?) that leaves pieces of the story unfinished. They also changed the ending song, I think to make the ending more upbeat. The people I was with who were seeing the show for the first time didn't notice and loved it, but having seen the original several times and having been so affected by it, the changes were noticeable to me. The guts of the show remain the same and overall the changes were minor, but enough to drop the score of the touring production slightly. But still a show worth seeing.... Read more Read less

See it if You know the storyline of Peter Pan. You have passed the age of reading such kind of stories.

Don't see it if You expect a happy story. You enjoy inspiring musicals.

See it if You love amazing touring casts, or love peter pan

Don't see it if if you can't go back in time

See it if You want something you can take the family too or don't care how unoriginal a musical is. If you are easily enchanted, then go see it.

Also I saw the show twice. The first time I really didn't like it. The entire show is just so bland, aside from the last half hour which I thought was magical and had me leaving feeling somewhat positive about. The second time, I enjoyed the show more since I knew what was coming so I was able to set my issues aside and enjoy it for what it was. It's not a terrible show, but its fine for what it is. I can see why people like it, but I felt as if I had seen the show a million times before and done better.... Read more Read less

See it if you want to see a musical version of the movie of the same name and you like Peter Pan.

Don't see it if you don't like shows with children in them, you hate Peter Pan, you want something a little more cerebral.

See it if You love the story of Peter Pan and believe in fairies.

Don't see it if You don’t know how to have fun.

See it if you want to be delighted and enchanted

Don't see it if you're not up for a sappy story

See it if All fans of Peter Pan must see how it all began. Special effects were terrific. The story is inspiring and sad.

Don't see it if If you think it is another Peter Pan play. It is the creation of the play from the writers story. I enjoyed it.

Don't see it if You want a purely fluffy show, while there is some fluff there are also some intense moments.

Also The tour version is different from the Broadway production. There are new songs and some of the original ones were cut. This version of the show is as amazing as the one on Broadway! I 100% recommend it... Read more Read less

Don't see it if You don't enjoy Peter Pan

See it if You loved the movie. You love to be swiped away into the story.

Don't see it if You have no interest in Peter Pan stories...

See it if Great music, story, staging. Unfortunately, they changed the beginning which was annoying and changed the ending was blasphemy.

Don't see it if it Is still an enjoyable show. Changing the beginning and end ruined an almost perfect musical. Original ending was touching andgave closure

See it if You love to escape into great storytelling and fantastical staging, including beautiful choreography and projection design.

Don't see it if You are looking for a unique story and modern themes- this is old fashioned goodness for the whole family.

See it if you love Peter Pan or anything of the like!

Don't see it if you don't like dealing with kids in the theatre- this is a family show.

See it if The young boys were the most entertaining parts of the show.

Don't see it if Poor audio that night - hard to hear. More helpful if you have background to the story

See it if you like the backstory of peter pan

See it if You like Peter Pan and are curious about the mind behind it all.

Don't see it if You don't like shows that are not completely filled with music. There is a good bit of dialogue, but it's great nonetheless.

See it if Looking for a good family fun!

Don't see it if Are not quite found of Peter Pan

Don't see it if You want a more raunchy or thought provoking show, or a show with amazing staging or acting

Don't see it if If you don't like musicals...

See it if you want to be enchanted and taken on a journey to the creation of Peter Pan by stepping beyond the comfort zone and the social monotony.

Don't see it if you disagree with pushing the boundaries of the social norm or if you do not like fantasy.

See it if you love movies made into musicals and beautiful stories on stage.

Don't see it if you did not like the movie.

See it if You love your inner child. This play switching from hilarious to heartwrenching in the blink of an eye as it spins its lovely tale

Don't see it if You prefer a life without laughter.

Also This is the type of play that will leave you sniffling and laughing upon exiting the theatre, yet speaking of wonder of its accomplishments in staging and song to your friends.... Read more Read less

See it if you enjoy the behind the scenes aspect of theater and are amazed by intricate sets and choreography.

Don't see it if I can't think of a reason not to!

See it if You want to relive childhood magic. Wonderful staging, the second act left me in tears. Absolute magic.

Don't see it if Not a very flashy musical, kind of slow at times.

“Finding Neverland (Tour) ” hasn't been reviewed by any Critics (yet!)