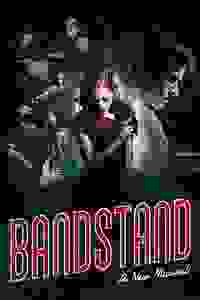 Set in the swing-fueled nightclubs of post-WWII America, this against-all-odds story of a singer/songwriter and his band of mismatched fellow vets comes to Broadway. Starring two-time Tony nominee Laura Osnes.

When a national contest to find America’s next music sensation offers a chance at fame and Hollywood fortune, Donny (Corey Cott) must whip his boys into fighting shape. Teaming up with a beautiful young war widow (Osnes) as their singer, and playing for every voiceless underdog in a world that has left them behind, they will risk everything to redefine the meaning of victory. Directed and choreographed by two-time Tony Award winner Andy Blankenbuehler ('Hamilton,' 'In the Heights'), and featuring an original, swing-inspired score, 'Bandstand' is an American celebration of the men and women whose personal bravery defined a nation.

See it if you love Osnes & Cott; they give great performances in a meh show. Plot is silly, characterizations inconsistent, dialogue is leaden...

Don't see it if and the staging is cramped by the set. The cast is almost entirely white (why?) Disappointing lyrics, unmemorable music. Read more

See it if you want to experience the charm of Osnes & Cott & to see some great 40s-inspired dancing in an otherwise forgettable, cliche-ridden musical

Don't see it if you want to hear a memorable score or see a coherent, original story. [The Greatest Generation deserves a much greater musical.]

See it if Dancing, Sing, Story about coming home after war, and dealing with life. Love story too.

See it if Valiant efforts by Osnes, Cott & an excellent ensemble provide ballast to bifocaled book Choreography energetic but uninspired

See it if you're looking for a more traditional-feeling Broadway musical that still moves with a contemporary energy.

Don't see it if you roll your eyes when shows feel very earnest. There's nothing irreverent about it.

See it if you enjoy good dancing, singing and musicianship; music is pretty but not memorable.

Don't see it if you care that the music is often too loud for the voices; you want a well edited play which flows - this is choppy and under directed. Read more

See it if you want amazing singing & dancing telling a story of returning vets.It is hard hitting.It is NOT a light, fluffy, pop music show.

Don't see it if you are looking at their marketing & think the show is just a 1940's musical.It deals with troops returning home and the scars they bring.

See it if you enjoy these excellent performers and/or would enjoy a love letter to our troops in the form of a Broadway musical. It moves on occasion.

Don't see it if you want originality of story, diversity of cast, or will hate that this took the choreography Tony "Holiday Inn" rightfully deserved. Read more

“An undercooked slice of apple pie, served with a dollop of anguish…It’s respectful of veterans, but not of itself, ultimately quitting on its own ambitions...Mr. Cott has a crushing charisma…Ms. Osnes, a brunette with a silvery voice, puts real feeling behind Julia’s loss…But even fine actors can’t make this story more persuasive. If ‘Bandstand’ really worked, the finale would find you laughing and crying. Instead, you might just make like the dancers and shrug.”
Read more

“The resonant original musical ‘Bandstand' dances a delicate line between nostalgia and disillusion…The terrific group dance numbers burst with snazzy individuality. But 'Bandstand's' heart is in its shadows...As the stakes rise, the score moves from pleasurable pastiche to a climax whose impassioned call for attention to the plight of veterans recalls the socially engaged lyrics of E.Y. Harburg. The show defies you not to be moved by its valiant band of brothers.”
Read more

“I’m not saying it’s perfectly carried out, or even especially profound, but it remains almost compulsively faithful to its vision…The darkness of the background does not mean that the show forswears entertainment…Although it features some Golden Age attributes it is hardly at Golden Age level. But an original musical with loads of fun music, expressive dance, and a will to grapple with issues that remain painfully topical is not to be dismissed glibly.”
Read more

“While many of the numbers have the propulsive feel of big-band swing, none of them are particularly memorable, and the generic ballads frequently stop the show dead in its tracks…Cott and Osnes are highly attractive and appealing performers, and they sing the hell out of their material…But for all the strenuous effort and good intentions evident in ‘Bandstand,’ it mainly demonstrates that if you’re going to drop the name Dachau in a musical, it needs to be far better than this one.”
Read more

“Cott and Osnes are worthy Broadway leads, with big voices and the energy and commitment to steer the show, but while they sounded great together, they lacked the spark that might’ve had me cheering for them to connect romantically…Blankenbuehler pulls double-duty as both choreographer and director here and manages with aplomb…'Bandstand' offers plenty to entertain in the moment, but despite its weighty theme, little lingers.”
Read more

“An earnest and often-entertaining musical that never quite achieves its noble ambitions. Despite the fluid staging and evocative choreography by Andy Blankenbuehler, an uneven book, undistinguished dialogue and only-serviceable tunes keep the show from meeting its deeper, darker and good-intentioned aspirations…Oberacker pens the mood-setting, pleasant and easily forgettable pastiche songs and lyrics...The cast is made up of solid performers, most of who play their own instruments.”
Read more

“It is to Blankenbuehler’s credit that the dazzling through-line of movement makes 'Bandstand' as much about dance as it is about music…The movement in 'Bandstand' is seamless and eye-popping, managing an astonishing feat…Oberacker and Taylor are clearly well versed in the musical idioms of the period and whose more-than-serviceable songs range from torchy ballads to roof-raising anthems...I have to wonder how this show was cast without a single non-Caucasian among the principals."
Read more

“Blankenbuehler's production just never stops for a moment, sometimes at the expense of the narrative flow...The dancing is, however, spectacular…‘Bandstand’ has a serviceable score, although there is so much music that it often tends to blur…The book has moments of freshness and all kinds of potential, but it never strives enough for poetic heights or depth of characters…All in all, this is a show with some frustrations as well as many pleasures for the ear and eye.”
Read more