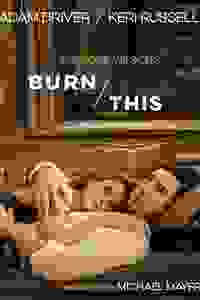 Burn This NYC Reviews and Tickets

'Burn This' tells the story of four New Yorkers whose lives are uprooted by a young dancer's accidental death. Set in downtown New York in the raw and gritty 1980s, the combustible drama explores the spiritual and emotional isolation of the dangerous, sexy, raw, and demanding Pale (Adam Driver) and the modern dancer Anna (Keri Russell), and their tempestuous relationship after the two iconoclasts are brought together in the wake of a life-changing personal tragedy. Directed by Tony Award winner Michael Mayer.

See it if you want entertainmt. BT lacks depth, but is funny/engaging. Plot makes no sense (why are lovers obsessed?). About journey, not destination.

See it if you must see these actors live. Unfortunately,​ Russell is not at her best. Driver does a good job with his cartoon of a character.

Don't see it if this is overly dated, incoherent, meandering and sophomoric. At the end of act 1 nothing is built to want to come back for more. Read more

See it if You are a big fan of one of the stars and want to see them on stage.

Don't see it if You dislike slow paced shows. There are many scenes of lots of a talking w/ little to no action or development. I found it pretty boring.

See it if You like your Broadway served with a heaping side dish of male testosterone. The three male actors excel here with a great script.

Don't see it if You’re easily offended by men being men. Lots of coarse language and enough actions to set the #metoo movement back to the Stone Age. Read more

See it if Russell and Driver are very good, chemistry is not so good between them. Has some funny moments in the show.

Don't see it if Poorly directed. 1987 at Plymouth was much better with Malkovich and co. Cast and direction just doesnt work.

See it if Stellar performances by all, especially Drier who commanded the stage. A well-crafted show that felt complete. I was engaged throughout.

Don't see it if You don't like Adam Driver or don't like shows about relationships and New York City.

See it if you want to see 4 good actors bring a very well-written recent period of life to amazing, realistic and refreshing performance on a nice set

Don't see it if you don't like to live for 2+ hours with other peoples problems or cannot adjust to the way things were decades ago that are not PC today.

See it if Driver lords over the theater with his passion, emotion & wit. His impositions are scary & fun. Rom-com w/many cheesy one-liners.

Don't see it if Russell is less charismatic, but maybe it’s just her dated gender role. The audience recognizes the formula & knows where it’s going.

"If Driver bestrides 'Burn This' like a colossus — everyone else seems to shrink beneath his shadow when he’s onstage....Mayer’s version, the play might be titled 'Waiting for Pale.' This is partly because Ms. Russell...never seems in any way undone...This 'Burn This'...only rarely stirs the heart. In the ideal production, it creates the sense of fire meeting fire in a folie à deux between two ill-matched yet inexorably bound lovers. What we have in this case is a one-man conflagration."
Read more

“Driver gives it everything he’s got. He’s terrific, and slightly terrifying...Pale is irresistible to Anna, too, and that’s where the Broadway revival of Lanford Wilson’s 1987 quasi-romance bumps up against its own limitations...The play features highly actable parts...Yet Anna is, for the most part, a noncharacter...After an angry first scene, she fades into a frustrating gray...Anna exists to be fought over and passed around, and even when she asserts herself, she is not to be believed.”
Read more

“Mayer’s revival...is pretty dang good — mostly because, playing the human furnace at its center, Adam Driver is straight-up great...The play’s inherent risk, though, is that Pale will eclipse Anna by sheer force of personality, and despite Russell’s best efforts, this ‘Burn This’ is indeed Driver’s show...Driver keeps the show aloft...And he’s funny as heck...Driver’s performance is certainly this production’s crown jewel.”
Read more

“In a performance of astonishing physicality...Driver maintains that dangerous energy...It's a credit then to the luminous Russell and the two supporting actors that nobody gets swallowed up in Pale's vortex...Wilson's play remains a compelling account of love...In choosing to dial up the humor, Mayer has undercut the anguish that is the drama's foundation, exposing ‘Burn This’ as just a circuitous journey to an inevitable romantic conclusion...Still, this is a dynamic production.”
Read more

“Mayer’s kinetic, consistently engaging production...Pale is a fantastically chewy part...And Driver owns every moment of it...Russell looks gorgeous...But she doesn’t seem entirely comfortable on stage...Driver moves through it all like his own weather system, maybe the most entertaining hurricane onstage this year...It’s too bad that the love story between Anna and Pale never completely convinces us that they are in fact, on fire; it sparks and smolders, but it’s not quite that kind of burn.”
Read more

“A finely-tuned revival that features incendiary performances by Driver and Russell, playing two lost souls in a powerful and passionate dance of denial...Vital to the success of this fascinating, flawed and overlong play is the casting, especially in the leads that require an audience to believe that such disparate people can find a safe haven in each other’s arms...Driver is riveting here, and audiences will identify with Anna’s dilemma of both wanting him to leave and needing him to stay.”
Read more

"No amount of high-class craftsmanship can conceal the fact that 'Burn This' is a smiley-faced variation on 'A Streetcar Named Desire'...The four parts are respectively played by Keri Russell, Adam Driver, David Furr and Brandon Uranowitz, all of whose performances have a shallow, one-notey feel. While I suspect that Michael Mayer’s direction is at least as much to blame for their collective lack of intensity, Mr. Driver is glaringly miscast as Pale."
Read more

“Nasty and big as a tree, Driver’s Pale is a one-note samba in a play that cries out for subtlety and nuance. There is nothing about Driver that inspires sympathy...In the shadow of his loutish and overwhelming performance...Russell seems colorless...’Burn This’ offers a chance to absorb a play that is based on the ...writing instead of the...’concept’...Even if this production offers more ashes than flames...’Burn This’ is still earnest, riveting and well worth a visit.”
Read more