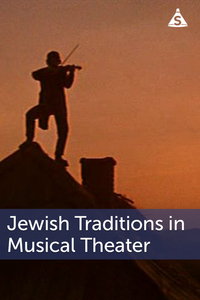 Learn about the connections between Jewish traditions and musical theater!

From the songs of George Gershwin to the works of composer Charles Strouse (“Annie,” “Bye Bye Birdie”), learn how the music and traditions of Judaism have inspired some of our greatest musicals. For example, did you know that Sheldon Harnick’s “Fiddler on the Roof” influenced Lin-Manuel Miranda’s “In The Heights”? Or that key melodies in "Porgy and Bess" were pulled directly from a Jewish blessing?

This illuminating and meaningful hour-long Salon in partnership with National Yiddish Theatre Folksbiene is led by Meredith Ganzman, who has interviewed many Jewish musical theater icons in her work as the former lead arts and entertainment reporter for The Jewish Channel.

See it if If you want to understand the connections that Jewish playwrights and composers have to musical theatre go to this salon ! Lecturer superb !

Don't see it if You have no interest in the history of American musical theatre and the huge part Jewish composers and writers have in it.

Don't see it if Not interested in cultural influences, don't like musicals,uncomfortable w discrimination/prejudices & successful efforts to rise above it. Read more