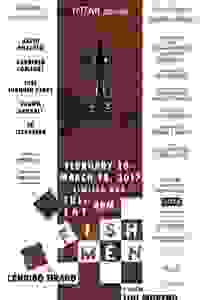 INTAR presents the New York premiere of Cándido Tirado's drama about a chess-loving computer programmer and the street players trying to hustle him.

On a hot summer's day Rey Reyes, a computer programmer for a large bank, walks into Washington Square Park to pay off a debt his uncle incurred the night before to chess hustlers. In dire needs of money, the hustlers talk Rey into playing a few games. "Ninety-Two," a Holocaust survivor who is always interfering with the players' trade, tries to pry Rey away from them. The struggle for Rey's soul between the hustlers and "Ninety-Two" gets more and more heated until the game becomes a life and death struggle.

See it if You like intense and intimate. The acting and script are superb. Plot can feel a tad slow but there is a solid payoff.

Don't see it if You don't like serious plays or getting up close and personal. This may taps variety of tough emotions.

See it if you want to see near perfect theater. Yes, its about chess but don't let that scare you. The acting is perfection

Don't see it if you want big fireworks on stage. This is 5 perfect actors and two chess boards but please don't let that scare you. see this show. Read more

See it if you enjoy dramas which give us a message without preaching; explore important life lessons; excellent acting and a dramatic ending.

Don't see it if you only like big Broadway productions; otherwise, no reason not to see this.

See it if you appreciate well drawn, complex characters especially from cultures under represented on the NYC stage.

Don't see it if you have a short attention span and can't wade through the preachy, unnecessary dialogue in Act 1. Second act was tighter and rewarding.

See it if you enjoy con men plots or stories of shared hardship and experiences accross cultures.

Don't see it if you will be dissapointed if not all character twists come through as believable in the acting.

See it if you like a drama about men getting together, in this case to play chess in the park.

Don't see it if you dislike plays that are too talky and too long.

See it if A great play that keeps growing in intensity. Edge of your seat and stays with you after its over.

Don't see it if You want a lighthearted evening of theater

"Mr. Tirado gives each character a ration of pithy dialogue, some of which is delivered by the actors as they are playing actual games of speed chess. That moderately impressive feat, though, cannot distract you from the overindulgence in this play...Requires a crackling type of accelerating tension that the actors hadn’t yet mastered. The director, Lou Moreno, presumably will tighten things up as the run goes along. That would at least make the play’s flaws more forgivable."
Read more

"Tirado plots his tale so cunningly, upping the stakes so stealthily, that it's difficult to pinpoint the moment when 'Fish Men' turns into such a nail-biter...'Fish Men' requires five vividly drawn characterizations, a mission neatly accomplished under Lou Moreno's taut direction...It's possible that 'Fish Men' ends on too neat a note, given the festering wounds afflicting some of its characters, but that won't keep you from being in a state of tense expectation throughout."
Read more

"Fitfully fascinating, but ultimately disappointing con job drama...That it’s very well acted and staged compensates for its lack of tautness...The play is marred by drawn out and repetitious writing...Still, Tirado has created five interesting and well-delineated characters and placed them in an intriguing setting...Director Moreno has aesthetically succeeded in infusing tension and visual variety into the presentation along with some riveting sequences and the excellent performances."
Read more

"The second act moves at an exciting pace (much quicker than the first, which could be trimmed, as some of the dialogue gets repetitive)…Each one of their histories could be a play unto itself, and it occasionally feels like Tirado is tackling too much. But it's always refreshing to see diversity onstage and their stories are moving...They were still tripping over their lines the press performance I attended, but each actor is believable in his role, so it was easy to overlook."
Read more

“There's lots of dialogue; in fact, about a half hour too much…This demands excellent actors who understand subtext and know how to pace themselves to reveal just enough and when necessary. Such skills are beyond most of the men in this cast…In this production they either remain static or change in ways that are supported by the text, but not the acting…Nevertheless, 'Fish Men' is often compelling. And the actors manage to pull it together for an ending that is quite moving."
Read more

"What gets played out during the course of this production is not only several riveting games of speed chess, but the burdens each character has carried through life for wrong’s committed...If you listen here, you will be challenged. Challenged and brought to a modicum of understanding. An understanding of, despite all the horrors we face that bring us to the precipice, we still innately have a desire to do good in the world."
Read more

"A rich character study...A thoughtful and compelling night of theater...Tirado could easily have turned this into another drama that assuages the guilt of liberal America by teaching and preaching to the choir, but he wisely masks it with natural and often funny dialogue...Director Lou Moreno has given his actors plenty of leeway to explore their characters, but still keeps the stakes high and the action laser focused."
Read more

"This show tackles a lot of issues including the Holocaust, the extermination of American Indians, genocide in Guatemala and Black Lives Matter...Act One is a lot of exposition and should be cut or at least streamlined. Act Two has payoffs but again, less is more...The cast is all superb with Setrakian and Pérez standing out. Moreno’s direction is fascinating to watch as the dialogue goes hand in hand with high-speed chess. This play has a lot going for it but seriously needs some cutting."
Read more