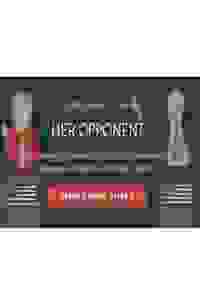 Her Opponent NYC Reviews and Tickets

Could experiencing what the two U.S. presidential candidates said and how they said it—but with the genders inverted—cause people to revisit their own personal biases and develop insights or a different perspective? An actor performs the text, gestures, and movements of Hillary Clinton, but as a male Democratic candidate named Jonathan Gordon, and an actress performs the text, gestures, and movements of Donald Trump, but as a female Republican candidate named Brenda King. The experience includes an opportunity for audiences to share their thoughts and impressions in a facilitated discussion immediately following each performance.

See it if you can get past being depressed about what might have been and are open to a truly eye opening experience.

Don't see it if you're comfortable with our political leadership and don't want to think about it anymore. Read more

See it if you're still fascinated by the 2016 election and the debates.

Don't see it if you hate politics or you just can't take any more.

Don't see it if the post-show discussion was fun, but could vary based on audiences. not a traditional show -more like a class/thought exercise.

See it if you're interested in looking at the 2016 election from a different perspective.

Don't see it if you need a break from politics.

Don't see it if You are not into politics

See it if You ever thought there was more to the presidential race then meets the eye. This production explores how the public captured these debates

Don't see it if You do not have an open mind to how gender played a role for each candidate. This show should be viewed without predjudice and bias opinion.

See it if You like shows that make you think, are in to politics, interested in gender identity.

Don't see it if You want to watch something flashy, doesn't require thinking, or are not into politics.

See it if you enjoy a very clever take on the 2016 debates and a gender reversal that really works. The actors took over the roles very well.

Don't see it if you can't look past your political biases.You need to look at these candidates with a fresh eye. A woman can be powerful and effective.

"Provocative, startling, and theatrical...Ms. Whorton is commanding...Mr. Embry totally evokes Clinton’s verbal rhythms and authoritative manner...Wagner perfectly simulates the dryness and self-importance of the various moderators...Ms. Guadalupe and Mr. Salvatore have selected highly representative portions of the debates and woven them into a fascinating one-act program...An enthralling and imaginative piece of documentary theater."
Read more

"A show without characters, acting, or writing. It is also not a show. What it is, is a mirror. And an ingenious one at that...This is not a satire, parody, farce, nor recommendation nor condemnation of what took place at the debates. This is the actual moment replayed...without the originals' gender or decades of being in the public eye...Time will tell, but I feel that the relevancy of 'Her Opponent' will hold the play up well in subsequent years."
Read more

“Rachel Tuggle Whorton tackles quite accurately Mr. Trump. Daryl Embry equally aptly tackles the persona of Mrs. Clinton, both nailing certain mannerisms, patterns of speech and general stature. Only the pronouns (he/she) were changed to make sense in this environment, and the names were changed but maintained the same rhythm…For a mild jolt and passing identification of your own biases, head over to the Jerry Orbach theatre.”
Read more