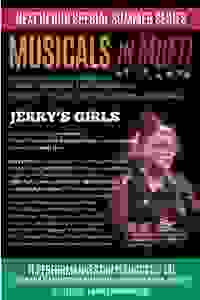 See it if you love Herman's oeuvre. Strong singing. Umoh is superb. No unifying theme to song choice or order. Scattered revue, but still enjoyable.

Don't see it if you like dialogue; JG is just songs, songs, songs. How about JH's bio? Needs more projections, more related to songs. Hard-working pianist!

See it if You want a fun trip down memory lane w/Jerry Herman's songs/shows. 3 sing ok but struggle when singing together. Easily overlooked. Sweet.

Don't see it if You want any kind of story. This is a revue and barely that. More like an homage to a brilliant man and his music. Enjoyable though flawed.

“Director Pamela Hunt's mounting is, by necessity, simply staged. But a knockout trio of performers, accompanied on piano by music director Eric Svejcar, keep the evening frothy and fun…Pedi masterfully handles the bulk of the comedy numbers…Displaying a vibrant belt and a showbiz spirit, D'Abruzzo really digs into numbers like ‘Wherever He Ain't’…Stephanie Umoh brings touching sentiment and graceful phrasing to ballads such as ‘It Only Takes A Moment.'
Read more

"The appealing show, featuring a talented trio, breezily glides through Herman's musical catalogue…The numbers largely proceed without historical context or thematic linkage. As a result some songs in the parade of ballads and anthems begin to generically blur together...A modest, yet authoritative, reminder of the additional riches penned by the composer/lyricist. While not everything gleams in this jewel box of a revue, it is worth sampling the treasures anew.”
Read more

“Composer/lyricist Jerry Herman's greatest hits are back in a gorgeously sung revival of ‘Jerry's Girls’ as part of The York Theatre Company's ‘Musicals in Mufti’ series, ‘musical theatre gems in staged concert performances.’ Led by a cast of three talented song stylists, Stephanie D'Abruzzo (‘Avenue Q’), Christine Pedi (‘The Lady of a 1000 Voices’) and Stephanie Umoh (‘Ragtime’), the score is as melodic and buoyant as one could wish.”
Read more

"Svejcar’s arrangements of Jerry Herman’s tunes astounded the theatergoers, lifted their spirits and put everyone in the happiest of summer moods...Director Hunt has successfully encouraged and allowed Christine Pedi and a pair of Stephanies–D’Abruzzo and Umoh–to do justice to Herman’s style, wit and lyrics, each in her own inimitable way...Only one drawback. I felt 'Movies Were Movies'...needed to be sung by the baritone voice for whom it was composed."
Read more

"With a few exceptions, director Pamela Hunt does little to celebrate Herman’s songbook. Part of the problem is the show’s construct, which feels like a Jerry Herman repertory company audition...These standalone numbers, while melodic and beautifully written, need the backbone of the stories from which they are taken...Umoh is by far the most successful at interpreting the material...If you’re a superfan, you might enjoy the evening despite its inconsistencies."
Read more

“A joyous and infectious tribute to a song catalog that made Broadway sing…These melodies remind us of a time when theatre gave us lush ballads and up-tempos that lasted more than the show. In other words hummable melodies…The discovery of Stephanie Umoh is worth the whole show. This showstopper excels…Ms. Pedi was hilarious…Herman’s lovely melodies made the show easy to listen to especially under musical director and pianist, Eric Svejcar.”
Read more

“There is absolute delight in the concert revival of ‘Jerry’s Girls’…Director Pamela Hunt has built in a steady supply of movement that keeps the show zipping along…The expertise of D’Abruzzo, Pedi, Umoh and pianist Svejcar provide sparkling entertainment and do justice to Herman…Apart from the striking solos, the three work beautifully together in creating a charming ambiance.”
Read more

“A robust revival...Christine Pedi shows her comic chops with a great rendition of ‘Gooch’s Song’…Equally fine is the wry, distressed ‘Nelson’…‘It Only Takes a Moment’ shows off Stephanie Umoh’s pretty vibrato…‘I Am What I Am’ arrives a stirring anthem eliciting audience applause. Director Pamela Hunt skillfully moves her cast around, but does nothing to rein in either ham or a tendency toward allowing eleven o’clock numbers when the song doesn’t indicate them.”
Read more

"The songs are the show. Directed by Pamela Hunt, too often the singers in this performance were overly dependent on the scripts...It was Umoh, with a secure, warm soprano, who was the standout performer...Musical director/pianist Svejcar ginned up the energy with vibrant pianissimo and, behind the ballads, delivered sensitive accompaniment without undue theatricality...What would help, however, was a bit more time to clinch the lyrics and rehearse together."
Read more

“A stellar trio...Umoh gets the biggest solo of the evening towards the end – a smashing 'I Am What I Am' from 'La Cage aux Folles' – but everybody stops the show at some point…Music director and pianist Eric Svejcar, a fine musical theatre composer in his own right, is very sensitive to the dramatic ebb and flow of the evening. So, too, is director Pamela Hunt…All in all a terrific representation of the Herman songbook. Recommended.”
Read more

“Christine Pedi is a treasure, but here she felt under-energized at time…More consistent in her commitment and animation was Tony nominee Stephanie D’Abruzzo…Best of all was Stephanie Umoh, whose rich voice, sparkling eyes, and playful manner made her a clear audience favorite…The show could probably have used a little more shape…It’s well worth your time if you’re looking for nothing more than a marvelous collection of songs put over by a talented trio of performers.”
Read more

"Full of charm, melody, love, hope, wisdom and just the right amount of froth to make for a darn good, feel-good time...The trio works well together in this mufti format, where minimalism reigns...With song...as the focus of the show, Herman shines with a bright light...Hunt’s eye for movement is sharp and intelligent. She’s also a master at pacing...As an ensemble, Jerry’s girls displayed a consistent synergy...'Jerry’s Girls' is a genuine happy-making, delightful treat of a show."
Read more