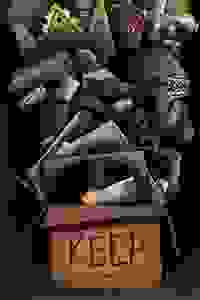 Wide Eyed Productions and the Mastodon Theatre Company present a play about a young hoarder trapped by her own belongings, and her sister who's trying to help clean up the mess.

Unable to throw anything away, Naomi becomes a prisoner in her own home. Her sister attempts an intervention, which unlocks old resentments and secrets, such as the fate of their missing sister, Margo, who disappeared years before.

See it if You want to see a well-acted play dealing with the emotional fear leading to hoarding and the toll it takes on those trying to help.

Don't see it if You are not interested in a play about 2 sisters helping a younger sister with hoarding issues, and secrets that destroyed relationships.

See it if Riveting story about the psychological motivations & challenges of a hoarder, and the impact on those that love and try to help them

Don't see it if If clutter makes you anxious/ uncomfortable.. I also thought the ending did not do the play justice-- it takes a weird turn in the last 15

See it if like great acting, and excellent dialog

Don't see it if do not like clutter, since it is so well conveyed not only in the demonstrative way but also in the meaningful way.

See it if you like insights into one person's behavioral response to a life event. Not judgmental.

Don't see it if you don't like psychological explorations

See it if you are interested in female-driven theatre, absorbing acting, and heightened text.

Don't see it if you need tidy resolutions, or are plot-focused.

Don't see it if you only like happy shows

See it if you want to see show with lots of twists and turns, and if you like to be challenged by a show

"Director Stephanie C. Cunningham guides the action in a way that helps to distinguish the individual personalities of each of the sisters, and the performances themselves are solid. But because we view the situation from within the puzzle box, it is difficult to sort things out...What we are left with is a portrait of a moment frustratingly frozen in time."
Read more

"Under Stephanie C. Cunningham’s careful direction, these sisters join together to attempt to clean up the apartment of their youngest sibling…Eye-opening, mysterious, and emotional, 'Keep' brings one family’s deepest secrets to the surface as one family embarks on a journey through a (literally) cluttered past."
Read more

"Though not broken up into acts, 'Keep' starts out as one play and ends as quite another. In some ways, this is delightful—the situational comedy of the first 45 minutes contrasts nicely with the more grim final movement. Indeed, the only way to tell the story of a family’s journey is to see both the good and the bad—one cannot exist without the other."
Read more

"The first part of the play is solid with fine performances by the ensemble...However, the play falters when it leaves the immediacy of the sisterly dynamic and launches into surrealist, other-worldly terrain...The conceptualization is interesting, but it is not effected with enough grace to hold the second half of the play together as well as the first...The production, rendered with skill by the director, though at times unwieldy, engages overall."
Read more

"Each sister’s pronounced character is clearly stated through the excellent performances...Lighting, sound, and set design created an engrossing, almost claustrophobic environment that pulled the audience into the scene, effectively portraying the proverbial walls closing in around the characters onstage...It is hard to find a portrayal of hoarding that is nuanced, sensitive without being sensationalized. 'Keep' explores hoarding from a larger, more complex emotional context."
Read more

"The performances are first rate with each handling their monologues with astute honesty...Stephanie C. Cunningham’s direction is psychological interesting...The set by J. Alexander Diaz is too clean. I never felt that it was terrorizing to be in this place or that something was going to crawl out or move...This is Pazniokas’ first work and she is a playwright to nurture and watch, though 'Keep' is not yet there. There are holes in the relationships and too many questions rather than answers."
Read more

"Francesca Pazniokas’ play is a fascinating exploration of a mental illness...but she sometimes gets lost in language that the plot falters...Individually, each actress brought something different but chemistry was lacking...For the most part, director Cunningham triumphed...When the audience is unsure if it's the end, it's not a good sign. 'Keep's' ending was a telling sign of the piece. Confusion. There is a lot of promise in this piece, the execution was just not where it needed to be."
Read more

"Although simple and subtle, the play lands like a character study, without strong motivations from the characters. Because the characters do not coherently or explicitly stand for something, it is the plot that eventually moves the discussion forward. Pazniokas aims to dive deep into America’s 'disposable society' and the value of human life, but lands somewhere between vaguely characterizing mental illness and grief."
Read more