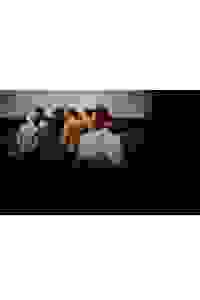 Using projections edited from found footage, this intimate solo performance is a reflection on memory, how it can be recorded and how it can be perceived. Part of the Public Theater's Under the Radar festival.

In 2008, Janek Turkowski discovered a cardboard box containing 64 reels of 8mm film in a North German market close to the Polish border. Each reel consisted of images of the same woman, Margarete Ruhbe. Captivated by the celluloid subject, Turkowski embarked on an artistic reconstruction of the life of a woman he didn’t and possibly couldn't know. Set against powerful images of the Communist Bloc, the story of Margarete unfolds from Turkowski's curiosity-driven purchase to his private investigation into the identity of a woman who left only a brief but indelible mark through home movies.

See it if You can. It may be restaged. This quiet, unassuming personal disquisition on a collection of discovered home movies is fascinating .

Don't see it if You expect a big story, or need plot and staging.

See it if you're curious to see an almost 100-yr old woman (now deceased) watch her home movie clips from 40ish years ago... it's sobering.

Don't see it if you want to really know Margarete (not many personal details here). You want to understand her movies in historical context (not much given) Read more

"As Turkowski becomes fascinated with one particular figure who appears in much of the footage, so do we...I won’t say what Mr. Turkowski eventually discovers; the revelation may not be on the scale of a Cold War thriller but in its ordinariness turns out to be just as exciting...It seems that humans must look for meaning in everything — and seeing that dramatized in Mr. Turkowski’s retelling was enough, for me, to turn 'Margarete,' though just a bunch of film clips, into theater."
Read more

“Under the Radar festival is leaning heavily into one-person shows this year...The loveliest of these is the meditative 'Margarete'...A deep dive into old 8mm films...The mildest possible detective story...Turkowski is attempting to make a connection, but what he really reveals is how distant we all are from one another. We look at a woman’s whole life as though we were archaeologists brushing dirt off a stone axe...‘Margarete’ exudes an almost monkish air of quiet contemplation.”
Read more

"Turkowski provokes a twinge of insecurity with his intimate and softly upsetting multimedia solo performance...In his sober, slightly melancholic delivery, Turkowski remains focused on Ruhbe herself...The personal tone of the piece is reflected in the presentation, which is for only 12 audience members at a time. Turkowski tries to affect a homey comfort...Unfortunately, the colorfully patterned rug can only partially disguise the cold tile. In a way, it is fittingly awkward."
Read more

"A kind of investigatory documentary...This is not an exposé of political repression; the woman in the films seems fairly prosperous...'Margarete', which runs only an hour, casts quite a melancholy spell...It offers a fascinating glimpse into a past most of us know little about; it is also a touching comment on the fragility of memory and the brevity of even the longest human life. I'm willing to bet that the many questions it raises will linger in your mind."
Read more

“Turkowski set out to reconstruct the life of the woman who appeared in the images...This subtle performance is his narrative of the quest to find out about her..He plays with the reels, changing the texture, editing, and remixing. When he adds a soundtrack, the images become more poignant. He invents subplots and characters, perfectly aware that these are his own – often droll – projections.”
Read more

“With a soft-spoken charm, Turkowski shares his obsession with us. His approach is so easy and conversational that you barely notice his tight structure...Turkowski casts a spell over us, enabling us to invent a story for ourselves...While it satisfied the voyeur in me, I expected more in the way of revelation...Nothing so sensational ever occurs, but the experience of this strange piece is far from disappointing. There is something haunting and beautiful about this glimpse."
Read more

“Margarete’s celluloid life is filled with idiosyncratic moments one comes to expect from 8mm amateur footage: amiable bus trips to various holiday destinations, birthday parties...However, this nostalgic imagery is juxtaposed by Turkowski’s own search for artistic and personal meaning. As we playfully try to reconstruct the historical, social, and geographical coordinates of Margarete filmic existence, Turkowski’s own digital life takes over.”
Read more