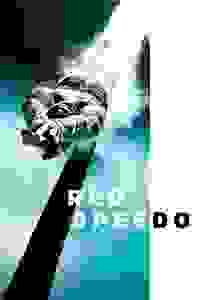 New York Theatre Workshop presents a play about sports, survival of the fittest, and the American dream of a level playing field—or leveling the playing field yourself.

Lucas Hnath makes his NYTW debut with Red Speedo, directed by NYTW Usual Suspect Lileana Blain-Cruz. Ray has swum his way to the eve of the Olympic trials. If he makes the team, he’ll get a deal with Speedo. If he gets a deal with Speedo, he’ll never need a real job. So when someone’s stash of performance-enhancing drugs is found in the locker room fridge, threatening the entire team’s Olympic fate, Ray has to crush the rumors or risk losing everything.

See it if Well written and acted. Great set. Fast paced after initial setting up and full of twists. Realistic flawed characters.

Don't see it if You want a play with any traditional hero.

See it if You're interested in stories about doing what it takes to get what you want.

Don't see it if If you need a little less talk and a little more action. It does pick up steam after awhile.

See it if you like well made plays that are character driven. A pair of brothers depend on each other but have individual needs creating opposition.

Don't see it if you are looking for something light or silly. There are many funny moments but this is serious drama.

Don't see it if Sports stories don't interest, don't like shows without an easy resolution, don't like plays in which all characters act badly

See it if you have enjoyed previous plays by the very talented Lucas Hnath. Although a slightly lesser effort, a nice addition to his oeuvre.

Don't see it if you are looking for a light comedy or unchallenging drama.

See it if you want to wonder about the ethics of Big Sport Money, The Media and our society

Don't see it if you want dancing singing and dazzle.

See it if You are interested in seeing a Lucas Hnath play.

Don't see it if You like unrealistic, though topical, plays.

See it if you want to see a fascinating exploration of what happens when you combine the pressure of success with money and family.

Don't see it if you like a fun night out.

"With fragmented dialogue that often comes at you like artillery fire, 'Red Speedo' recalls the (good) work of David Mamet, distilled and compressed...But Mr. Hnath’s voice and style are fundamentally his own. There’s an elemental, stylized simplicity to his work that focuses attention on the meanings behind the matters at hand...The characters are palpably, at times movingly, human in their complexity...'Red Speedo' only grows in intensity as the clock winds down on its brief running time."
Read more

"Hnath’s swift, slippery play moves in Mametian lunges of rapid dialogue and desperate gambits. It’s full of opportunists whose stories don’t check out, and the actors speak in clipped, deliberate ways. Warmer performances could enhance the play, but the chill fits 'Red Speedo’s' dissection of ambition...Doesn’t [Ray] deserve a shot at what he calls “the American thing”? He means dream, probably, but the word is out of reach for this beast of burden, whose greatest hope is to brand himself."
Read more

"Blain-Cruz’s work here is also a brilliant rendering of a difficult text, one that reads nearly like gibberish on the page but plays like a thriller onstage...It takes some very smart acting to get that kind of unintelligence just right. Also some very smart playwriting. If 'Red Speedo' is not, finally, as profound as 'The Christians' — the pool is only four-foot deep — that’s doesn’t mean it’s unimportant. Shallows, too, are worth exploring."
Read more

"Unfortunately, the provocative themes are undercut by mannered dialogue, one-note characterizations and melodramatic, contrived plotting. The play is also, despite all its sensationalism, so tedious that the frequent blasting of an air horn between scenes seems necessary to keep the audience awake...For all their hard-working efforts and those of the other performers, 'Red Speedo' is disappointingly skimpy."
Read more

"As in last year’s 'The Christians,' Hnath tackles moral issues without lecturing...The production is overall superb, and Breaux, who spends the entire time in the title trunks, has the right balance of doofus earnestness and selfish cunning. It all culminates in a physically and emotionally bruising conclusion that left a recent audience reeling."
Read more

"Welcome to the dopey drama 'Red Speedo,' written by Lucas Hnath and directed by Lileana Blain-Cruz. Logic and even remotely authentic-sounding dialogue have sunk to the bottom of the deep end. This is an 80-minute exercise in unconvincing broad strokes...Yes, the set, which includes a one-lane pool, is splashy. But so is a bellyflop."
Read more

"The tank is an impressive touch, and the lead actor swims a lap or two in it, but the real reasons to see 'Red Speedo' lie in Hnath’s lean and muscular writing, his complicated characters, and their desperate situations and morally questionable responses, all of which come to light in Lileana Blain-Cruz’s brutally focused production."
Read more

"Director Lileana Blain-Cruz thrives within the physical constraints of the production, leading the cast to thrilling and dangerous performances...As he did with 'The Christians,' Hnath raises hugely important questions about our society and the occasionally perverse behavior it encourages...As always, Hnath leaves us to slug it out after the show, a fight certain to be as exhausting and fruitless as the one at the end of this troubling and truthful play."
Read more