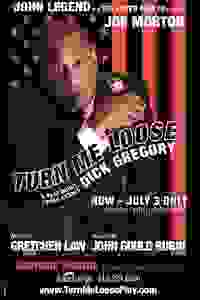 Gretchen Law's two-hander tracks the course of Mr. Gregory's personal and professional history. When he forced himself onto the stage at The Playboy Club in front of an audience of Southern, white, frozen-food conventioneers, he transformed their racist heckling into howling laughter, and initiated an unprecedented comedy career. 'Turn Me Loose' explores Gregory’s struggle between his new-found celebrity and his yearning to join the civil rights movement. Produced by Grammy Award-winning pop star John Legend.

See it if You want to be stirred by a caring man's fight for racial equality. Dick Gregory was more than just a comedian.

Don't see it if You prefer lighter subject matter.

See it if You want to see an absolutely incredible performance and to learn about Dick Gregory. Totally enthralling. Amazingly topical.

Don't see it if You'd rather not think about hard issues. Very intense but funny too. Totally worth seeing.

See it if you want to see a brilliant, tour de force performance by Joe Morton, providing insight into the life, wit and passions of Dick Gregory.

Don't see it if you are uncomfortable with activism and racially charged themes. Even so, this is a performance not to be missed.

See it if you want to see a magnificent performance by Joe Morton.

Don't see it if you are put off by rude language.

See it if you care about social issues, specifically racism and if you lie a show where you are laughing one minute and deeply moved the next

See it if you're interested in race relations in the last 50 years, & you want to see a great perf by Morton. Stunning & sad how little has changed.

Don't see it if you have a problem w/ a tiny theater w/ no leg room where the lights smoke & smell, & an even tinier lobby w/ 2 show audiences packed in.

See it if you think ninety minutes of Joe Morton channeling Dick Gregory would be amazing -- you'd be right.

Don't see it if you're easily offended by criticisms of white privilege. Actually, scratch that -- you NEED to see it more than anyone else.

See it if You want to see a tour-de-force. Joe Morton is astonishing (he scores 100), And the play is good as well.

Don't see it if You aren't willing to hear some real and perceived criticisms of the US. The play draws directly from Dick Gregory's life.

“The show feels as raw, vital and funny as any stand-up set you’re likely to find in New York today. Some jokes feel so topical it’s hard to believe they date from decades ago...When Mr. Morton’s Gregory takes the stage, it’s as if a wrecking ball suddenly shattered the back of the theater. He’s sharp, pointed, tearing into material about racism with a fearless bite that still takes your breath away — or would, if you weren’t already wheezing from laughter.”
Read more

"Even if you know the routines of Dick Gregory by heart, 'Turn Me Loose' still has the power to surprise, shock and galvanize. That's in part due to his insightful and uncomfortably hilarious views on our country's race and class problems...His scathingly accurate analysis wouldn't land with such force without Joe Morton's revelatory performance...Law distills his 83 years into 90 potent minutes...This slyly entertaining evening is a call to action, too."
Read more

“It's certainly a tour-de-force vehicle for its star...Morton doesn't deliver an exact impression but certainly channels his subject's biting delivery and sharp comic timing...The play, which touches on the many phases of Gregory's career, may be slightly too esoteric for non-fans. But even those not particularly interested in Dick Gregory would be foolish to pass up the opportunity to witness the remarkable performance by the play's star whose energy doesn't lag for a single moment.”
Read more

"In one of the most astonishing performances of this or any season, Joe Morton plays the enduring comedian, activist, gadfly and author with a warmth and precision that has nothing to do with versimilitude and everything to do with passion, knowledge and chops…The intimate play is expertly staged by John Gould Rubin…Morton plays — no, inhabits — the life force that is Dick Gregory with passion, authority and astonishing power...It’s an unforgettable portrayal of an unforgettable man."
Read more

“Gretchen Law’s play isn’t a traditional biopic, focusing instead on Gregory’s stand-up and activism, and how the two melded. Morton is utterly charismatic, working the mike like a man on a mission — which Gregory was, after all...Among the show’s highlights is the comedian/agitator’s first appearance at Chicago’s Playboy Club in 1961, when he was heckled by visiting Southerners. It’s equally funny and chilling, and time doesn’t make the exchange go down any easier."
Read more

"Since his 'Brother from Another Planet' days Joe Morton’s been giving memorable performances. But his current star turn is out of this world. He plays Dick Gregory, a pioneering black stand-up comic and activist who wove jokes about racism and bigotry into his act 50 years ago...Gretchen Law’s fine play toggles between the 1960s and today...There are a few awkward spots, mostly when Gregory addresses himself. But that doesn’t lessen this vivid portrait."
Read more

“Morton gives a committed (and sweaty) performance as Gregory, convincingly embodying the stand-up in various stages of his life. This is despite a somewhat messy script...It feels like a promising first draft...Morton makes these overwrought and underexplained moments work. He's a master monologist...Admirably, ‘Turn Me Loose’ is not a whitewash. Nor is it as impactful as it could be. The end result is a fuzzy portrait of a complicated figure.”
Read more

“Morton seamlessly segues from an energetic youth who uses gags to combat hate to an elderly sage who demands attention when speaking out on the issues of the day. As convincing as Morton is playing the character of Dick Gregory, he's just as convincing as a stand-up comic, playing routines to the theatre audience with a sharp ear for their reactions and a jaunty aggressive confidence.”
Read more