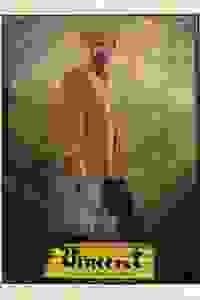 Starry Night Theater presents the late Leonard Nimoy's one-act solo show about the legacy of Vincent Van Gogh, as told by his brother.

Vincent Van Gogh's brother, Theo, defends his famous sibling's legacy at a gathering of friends and colleagues. Theo is not interested in telling the small story of the demise of one man. Rather, he argues the bigger meaning and significance of his brother’s life to all humankind. As seen through the eyes of Theo, Vincent van Gogh lives on as a symbol of inspiration, courage, passion, and the lust for life that art kindles in all of us.

See it if You're a big Von Gogh fan.

Don't see it if You want to get more than a sensationalistic sense of who Van Gogh was. It felt very superficial to me.

See it if you want to learn more (in a Wikipedia sort of way) than you think you know about van Gogh. Lacks humor and pathos but has good intentions.

Don't see it if you are hoping for real insight into Vincent van Gogh or his brother Theo.

See it if You know nothing about Vincent Van Gogh. You want to see an excellent but slightly pedantic solo person performance.

Don't see it if Have even a fleeting knowledge of VVG or unless you think dramatic staging is walking among tables picking up "letters" and reading them.

See it if One man show tribute to Van Gogh by actor portraying his brother Theo; despite a heartfelt effort it was dull and failed to engage me.

Don't see it if I liked the ever changing, large scale projections of Van Gogh's paintings and drawings but the rest felt like a slow, boring lecture.

Don't see it if If you don't like monologs

See it if You are a fan of Van Gogh and want to learn more about him...

Don't see it if You're not interested in Van Gogh's life and works...

Don't see it if you're looking for originality,or something particularly profound. This is a rose-colored picture of a brother.

See it if you are interested in learning about Van Gogh's life but too lazy to read his letters.

Don't see it if you've already read the letters. Because that's basically the whole play. The acting was really overwrought.

"It's not a towering achievement of dramatic writing; though thoughtfully rendered, it's more educational on the page than it is affecting, and thus requires a riveting star to elevate it beyond that. It does, however, boast a smart construction...Such mechanics unfold well enough here under Brant Pope's direction...It's tough to avoid feeling that the story Briggs and Pope are telling is not entirely in sync with the one Nimoy wrote."
Read more

"Briggs has a thoughtful command of the material, as he portrays the responsible brother to the erratic artist...Theo is perceived at a distance as directed by Dr. Brant Pope. Pope chooses to keep the performance quite even, and takes time to elucidate the points of the painter’s life succinctly and without great fervor...Pope also relies on Vincent’s paintings to guide the storytelling. This is the best part of the show...The sheer number of images utilized in this production is impressive."
Read more

"A stolid but empathetic production...The play, or more accurately Theo's animated lecture, is an extended tribute to his brother...Though this gathering is based on fact, under the direction of Dr. Brant Pope, it falls far short as drama...It would take an actor with more demonstrable resources than the otherwise affable Briggs can muster to bring to life...Unfortunately, humor is a notably missing element."
Read more

"If you’re searching for an example of genuine brotherly love, you don’t start with Cain and Abel. Perhaps the choicest place to look is Vincent and Theo Van Gogh...Briggs makes Theo a deeply sympathetic character. The man’s love for his conflicted brother is achingly delineated. As Theo’s portrait is projected, the impression is given that Briggs, helped by his beard, does resemble Theo somewhat."
Read more

"'Vincent' is a play with such tragic beauty that it can’t be missed, however, even a play with a captivating story can be a bit lackluster...While Briggs gave an entertaining show, this particular performance on stage was not quite as captivating as the story being told itself...Fortunately, the show’s beauty, not only in Nimoy’s writing but also in the set design and music, shines through."
Read more

"'Vincent' is a memorable and moving production that will, without a doubt, kindle theatergoers' interest in van Gogh, the man, and inspire a fresh, new appreciation of his artistic works...Briggs' presentation is well-paced, and he maintains flawless characterization and engagement for the entire 85-minute production. 'Vincent's' excellent qualities also extend through to its stagecraft."
Read more

"The original play, as written by Leonard Nimoy, divides the play into two sections, the first in which we learn about the artist from his brother Theo through their letters to each other, and the second in which Theo talks directly to the audience about Vincent. It is a simple dramatic device that makes Act One purely expository, and Act Two not only dramatic, but revelatory...Jim Briggs and 'Vincent' are a classic match of temperaments. His production is both enlightening and enjoyable."
Read more