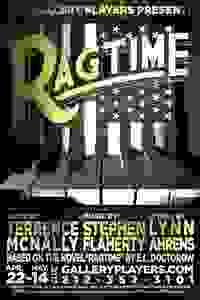 The Gallery Players presents a revival of this musical portrait of early-20th-century NYC featuring intersecting stories of three families pursuing the American Dream. Based on E. L. Doctorow's acclaimed novel.

At the dawn of a new century, everything is changing, and anything is possible. Set in the volatile melting pot of turn-of-the-century New York City, three distinctly American tales are woven together—that of a stifled upper-class wife, a determined Jewish immigrant, and a daring young Harlem musician—united by their courage, compassion, and belief in the promise of the future. Together, they confront history's timeless contradictions of wealth and poverty, freedom and prejudice, hope and despair, and what it means to live in America. Written by award-winning songwriters Stephen Flaherty and Lynn Ahrens, and noted playwright Terrence McNally.

See it if Consensus of 5 of us is a 99. Almost perfect. Cast of 36 can do no wrong. . Dance and songs super. Gallery Players have had a super season

Don't see it if Sorry... no negatives,, The Gallery just needs more seats.

See it if you're interested in early 20th century Americana or issues of race and immigration. The cast does a great job with limited resources.

Don't see it if you don't prefer stripped-down shows that are light on sets and costumes, or you're just not into classic musicals.

See it if you enjoy period pieces w/beautiful costumes, staging & masterful music. Parts are hard to take, but it IS exquisitely & exceptionally done.

Don't see it if US history race-relations & equal-rights struggle is a turn-off. Not a happy theme. It's deep, thought-provoking, heart-wrenching, & REAL.

See it if you enjoy period shows with great acting, singing. Great costumes and sets.

See it if you never make the trek to Brooklyn for theater. a new high for the great Gallery. magnificently sung and staged. monumental and moving

See it if you enjoy classic musicals very well staged in a small (almost intimate) space.

Don't see it if you believe alternative facts or you don't acknowledge racism still exists.

See it if Just sit back watch and listen to some of the best lyrics ever. Many genres of music

"In the hands of the Gallery Players, 'Ragtime' flourishes. Under the capable direction of Mark Harborth and his talented cast, the musical is compelling, entertaining, and heart-wrenching...The vocals in this production of 'Ragtime' make the show a must-see...But if you don’t go for the vocals, go for the dance numbers. Brilliantly choreographed and seamlessly executed, the dance scenes in this production are fun and full of vitality...The music of 'Ragtime' resonates with everyone."
Read more

"McNally’s book, a small masterpiece of concision and focus, stitches Flaherty and Ahrens’s superb songs into a 'gorgeous mosaic' of the story of America...Not every cast member boasts Broadway-quality singing chops, but the overall talent level is most impressive...Director Mark Harborth marshals the large cast skillfully to render the show’s panoramic portrait of the human spirit with piercing energy, convincing period atmosphere, and clever staging, buoyed by witty choreography."
Read more

“The basis of the story involves three groups - Blacks from Harlem, Middle-Class Whites from New Rochelle, and Jewish Immigrants from the Lower East Side. They live separately but the early 20th Century has brought in with it a new music, which appears destined to upset the old order. Political turmoil, labor unrest, and the boiling over of the melting pot seem to foreshadow conflicts that may be inevitable. This production features 37 actors and excellent choreography. I highly recommend it.”
Read more

“The cast is superb. The period costumes make the pre-World War I era come alive before our eyes. The fight sequences are amazingly realistic. The play features three groups - blacks in Harlem, whites in New Rochelle, and Jewish immigrants from Latvia. They live separate and apart but in this play, several events take place causing their worlds to collide. I highly recommend this production. The Gallery Players did a magnificent job. Do yourself a real favor by seeing it!”
Read more